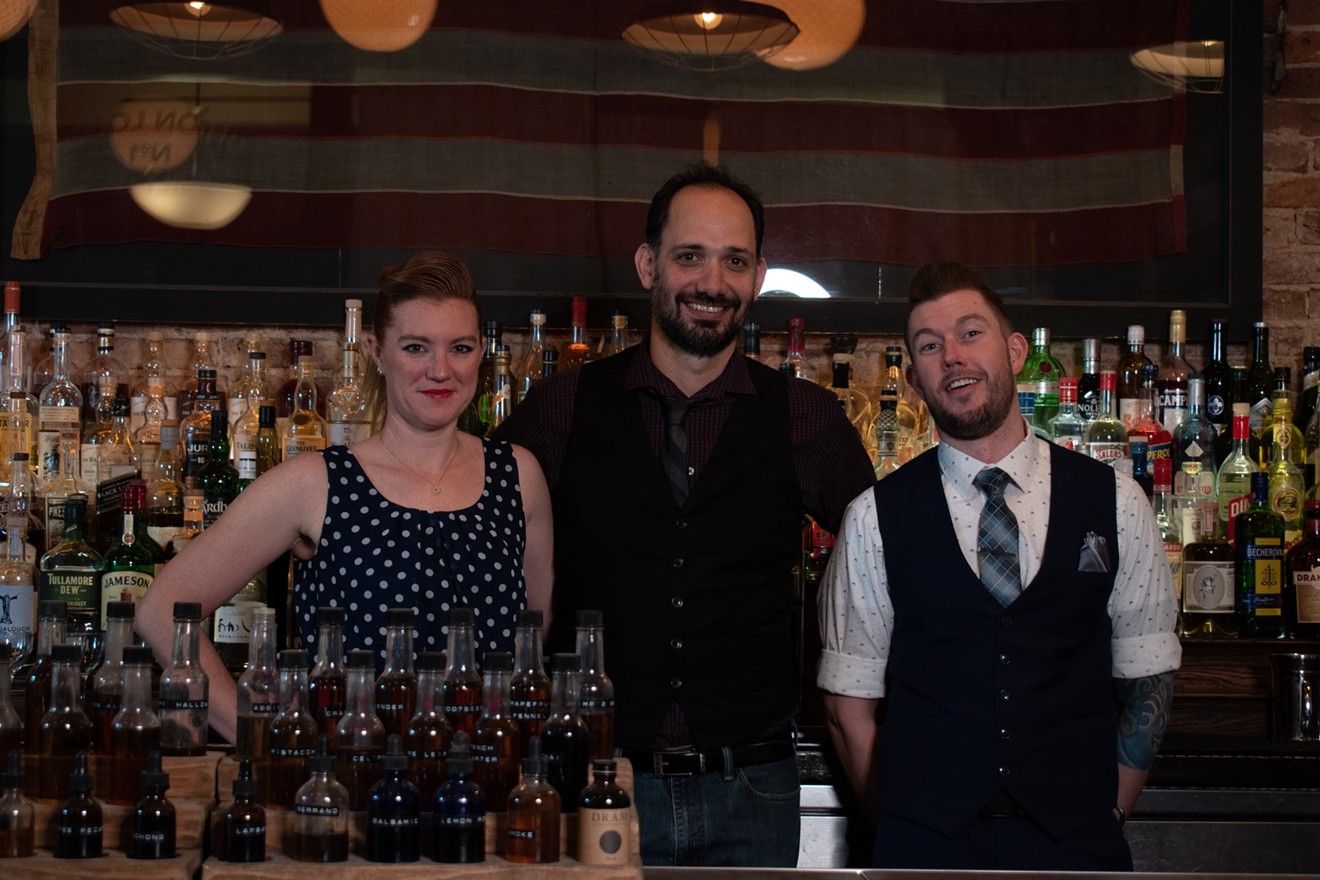 Samantha Bolte-Woods (left), Brad Kaplan and Bill Hutcheson of 3 Stars Podcast. 3 Stars Podcast
If you say the word "Yelp" to anyone in the service industry, chances are they'll have some strong — and likely negative — thoughts on the review site. Servers and bartenders, in particular, get the brunt of the backlash when guests opt to leave feedback via the internet rather than speaking up in person. But now, three longtime bartenders are turning the tables with their 3 Stars Podcast.

Brad Kaplan, Samantha Bolte-Woods and Bill Hutcheson met while working together at a restaurant at Denver International Airport. Each of them has around twenty years of experience in the industry, and a few years ago, Kaplan began tinkering with the idea of doing some sort of industry-related podcast. Then a not-so-uncommon occurrence sparked a concept.

"I came home from work one day, and I was extremely frustrated with my manager regarding a Yelp review that I remembered happening," Bolte-Woods recalls, adding that the review itself wasn't directly related to her, but that she and the rest of the staff were yelled at anyway. "And, of course, it didn't happen the way the Yelp review was written. ... What irked me the most is that I told the manager how it all went down, and there was nothing the manager was going to do about it."

A review can have harsh consequences for an employee, often with little to no chance for the worker to offer feedback. "I had been disgruntled about all these Yelp reviews and how our job sadly revolves around them," Bolte-Woods adds. "You can get fired over a Yelp review, and that's not fair."

"I have gotten fired over a Yelp review," Hutcheson confirms.

And so the three set out to review Yelp reviews, breaking them down with industry insights. The podcast is named 3 Stars because Kaplan says he came across a statistic showing that most people won't consider going to a business that has three stars or fewer on a review platform. "Our goal, when we first started this, was that non-service-industry people would hear us," he notes.

"I know a lot of the non-service-industry public don't listen to this podcast, but if they did, they would learn a whole lot more about the service industry," Bolte-Woods says. "We're not just robots." The bar banter on 3 Stars Podcast will give you industry insights.
Molly Martin

The trio has tackled a lot of topics since launching the podcast in May 2020, after the pandemic gave them the chance to finally get in the same room together and bring the idea to fruition. "None of us had the first clue as far as how to actually start a podcast," Kaplan admits. "We had a learning curve, and then luckily, that learning curve straightened out quite a bit with COVID, because suddenly we weren't dealing with mismatched schedules."

"We were just day drinking and recording like four episodes at a time," Hutcheson adds.

While the trio admits that those first episodes were a little rough, the show is now on its third season, releasing new content that includes full episodes as well as shorter "HalfShots" every two weeks or so.

One episode from January is focused on Occidental owner Sean Kenyon's response to a one-star review, in which he Yelped back with evidence from video and audio recordings that proved the reviewer hadn't been honest. "Thank God for Sean that he backs up his staff," Bolte-Woods says.

A recent HalfShot dives into the issue of cleanliness on both sides of the bar. In another, the trio discusses the art of cutting off someone who's had a few too many.

Topics come from all over, and there's no shortage of them. "We don't ever run out of things to say," Bolte-Woods explains. "We may sound a little redundant on certain topics, but that's because they're still coming up and it's not being fixed. It's not being changed, and no one's doing anything about it."

One of those recurring topics is the public's attitude toward restaurant and bar workers. "COVID made everybody shut down, and when people started coming back, you had a lot of people saying, 'I appreciate you so much. Thank you. We're so grateful you're open,'" Kaplan recalls. "And that was very short-lived. And then it's almost like the entitlement, the rudeness and the lack of understanding came back with a vengeance."

3 Stars is more than just a way to talk about Yelp and other review sites; it's a way to humanize the service industry and to educate people. "We have this passion," Kaplan adds. "If you're in the industry for any long period of time — yes, the money's good. The schedule can be good. But there's obviously something in you that's a desire to serve, and to then have people come in, turn around and treat you like shit...it's deflating. It's degrading."

Especially when that treatment comes from behind a keyboard. Instead of jumping to Yelp or other review sites to vent about a bad experience, Kaplan wants diners to consider other routes: "Did you say something to the bartender? Did you email the owner?" Although it might be intimidating to speak up in the moment, that gives the restaurant the chance to address any issues in real time, which is what most industry workers would prefer.

The biggest lesson the three hope that listeners take away from their podcast: "Self-awareness, and be kind. Treat other people the way you want to be treated," Bolte-Woods says.

And that goes for people on both sides of the bar.

For more information about 3 Stars, visit 3starspodcast.com or follow it on Instagram @3starspodcast.
KEEP WESTWORD FREE... Since we started Westword, it has been defined as the free, independent voice of Denver, and we'd like to keep it that way. With local media under siege, it's more important than ever for us to rally support behind funding our local journalism. You can help by participating in our "I Support" program, allowing us to keep offering readers access to our incisive coverage of local news, food and culture with no paywalls.
Make a one-time donation today for as little as $1.