The first and last stop for beer lovers visiting Denver from around the world, and the heart and soul of the city’s craft-beer scene since it opened in 1997 just a block from Coors Field, Falling Rock will pour its last pint on Sunday, June 27. Its closure will sever a rudder that helped steer people to small and independent breweries — a safe harbor where you knew there would be “no crap on tap.” It will also leave a hole for thousands of Colorado Rockies fans making their way to the stadium every summer.

“It’s been tough. This has been tough,” says bar founder Chris Black, whose name and goateed face are synonymous with Falling Rock. “But 24 years is a pretty great run.”

Black and his brothers, Steve and Al, said the pandemic was brutal for a business that relied on drinkers lining up shoulder to shoulder at the long bar or sitting nose to nose at its English-style pub booths. But the past eighteen months were just the cap on what has been a difficult five-year stretch that included a 54-week construction project on Blake Street that cut Falling Rock’s business by 30 percent, changing demographics in the neighborhood, challenges with finding staff and, ironically, competition with other breweries.

Chris Black pours a beer at Falling Rock Tap House.
Jonathan Shikes
“COVID isn’t the reason. There is no one single reason. It has just been the adding up of a thousand little cuts,” Black says. “This industry is hard…and, like most things, it’s complicated.”

The bar’s 24th birthday was actually last week, but Black says he “didn’t have the heart to do anything” as a celebration since he knew what was coming. Nevertheless, he points out that not everything about the closure is negative. “We completely changed the Denver beer scene, but also how people do things in this industry, for the better," he says. "And we completely changed Great American Beer Festival week.” That GABF legacy may be the most heartbreaking for many people to deal with, since Denver is the home of what has become the biggest annual commercial beer festival in the world — and Falling Rock is the hub that keeps that week-long party going.

Falling Rock opened back when there was almost no craft beer on tap anywhere in town — in part because of Coors Brewing’s massive shadow. And that was also a difficult time for craft breweries. After an initial boom in the late 1980s and early 1990s, a competitive shakeout had forced the closure of dozens of beer makers across the country in and around 1997, including several in Colorado. But Falling Rock gave the remaining breweries, including heavy hitters like Odell, Boulder Beer and New Belgium, a Denver home — and a place for them to continue to gain new fans, get their name out there and find support. It was also a home away from home for out-of-state stalwarts like Russian River, Victory, Sierra Nevada and Stone Brewing.

In 2001, Black began throwing an unofficial GABF kickoff party starting at 5 p.m. the Monday before the festival, putting special beers on tap and hosting brewers from far and wide who would already be making their way to town. He also hung a huge digital clock on the wall that counted down the minutes and seconds — not to GABF, but to his kickoff event. Falling Rock introduced other signature events, too, like its fresh hop festival, Dain Bramage week, sour festivals and, of course, the yearly Pliny the Younger tappings. 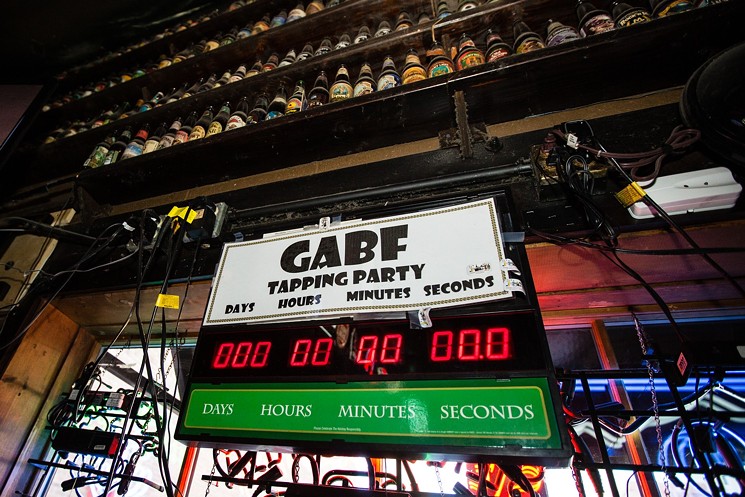 The GABF party countdown clock.
Danielle Lirette
On crowded evenings — and most evenings were crowded — patrons learned that they needed to order quickly and usually by the number listed on the menu or above the bar, since there were often up to ninety beers on tap. If they didn’t, they might be quickly, even brusquely, passed over for the next person in line. That culture irritated some customers and charmed others. Oh, and stupid questions cost $1.

Falling Rock fended off competition from many other pre- and post-game sports bars in burgeoning LoDo during the next dozen years, but it would face no challengers as the go-to spot for craft-beer drinkers in Denver. That began to change in 2010, though, as a new wave of beer bars and breweries opened. And the scene was entirely overhauled over the next decade, as the popularity of craft beer reached a fever pitch.

But Falling Rock remained the top destination, with Black the king of the castle.

“I remember the first time walking into Falling Rock in 2004, when I had just turned legal drinking age, started to develop my appreciation for beer, home brewing and the craft-beer culture,” says David Lin, who founded Comrade Brewing in 2014. “I was in complete awe to see all the bottles lined up on the shelves and beers from breweries I had never heard of. It's been a foundation of my passion for the industry as well as really helping put Comrade on the map.”

Just three weeks after Comrade opened, Black put the brewery’s flagship, Superpower IPA, on tap. “That was immense for us, because it's not an easy place to get your beer on," Lin recalls. "But having gone there for more than a decade, to see our beers on that wall was like a dream.” It’s also where Lin and his staff celebrated their GABF medals for Superpower and other beers.

“Falling Rock was the gold standard, and Chris had a fearsome reputation for not putting substandard beer on tap,” adds Bill Eye, who headed up the brewing operations at Dry Dock Brewing and Prost Brewing before opening Bierstadt Lagerhaus in 2015. “If you wanted to be on tap at the Falling Rock, you had to talk to Chris — and I’ve seen and heard some things regarding that. So in 2012, when he agreed to put on the hefeweizen from the brewery where I was the owner and brewer, I was tremendously proud. I took pictures of that first beer that was sold anywhere. It made me feel like a grownup, finally, in the industry.”

Eye and Lin aren't the only ones with stories. Black could be a brewer's most ardent supporter — or their harshest critic. In recent years, that criticism turned more often toward some of the breweries that began to compete with Falling Rock. Other beer bars were one thing — but when some of the breweries that he'd bought beer from began opening satellite taprooms in Denver, staying open later, hosting events and keeping back their special beers, Black felt like they were upsetting “the ecosystem” of a beer distribution system that had been working.

He penned a famous rant about Oskar Blues when it opened a huge new taproom and music venue downtown in 2016, but he also had choice words for Breckenridge Brewery, Odell Brewing and others — and their beers disappeared from Black’s enormous tap wall.

Falling Rock Taphouse
They’ll all be gone come June 27, though. Big and small breweries. Old and new. Between June 23 and June 27 (Falling Rock will be closed on June 21 and 22), Black and general manager Beth Walter will be selling off all of the remaining cellar and leftover merchandise, along with some signs and decor. The tap handles and neon signs will go back to the breweries where they came from (except for the Celis and Tabernash signs, which Black will keep), while the massive collection of beer bottles that adorn the wall will…well, Black isn’t sure what to do with those yet. “If anybody has ideas of what to do with [them], I’m all ears," he says. "I’d really hate to just recycle them."

He hopes to donate the sign out front to History Colorado, which hosted a huge beer exhibition in 2019 and 2020, before the pandemic forced it to close early.

As for Black himself, he'd like to stay involved in the beer business in some way. “I’m hoping I haven’t pissed off enough people in the industry” to preclude that, he says with a laugh. In the meantime, he plans to hang out a lot at the Bull & Bush Brewery. “They are family,” he points out.

And when GABF finally returns in 2022 (it was canceled this year owing to the pandemic), he knows he’ll be somewhere drinking a delicious beer at 5 p.m. on the Monday before the fest. But he isn’t sure exactly where, he admits: “I’m going to have to find out where all my friends are going — and I’ll go be with them.”
KEEP WESTWORD FREE... Since we started Westword, it has been defined as the free, independent voice of Denver, and we'd like to keep it that way. With local media under siege, it's more important than ever for us to rally support behind funding our local journalism. You can help by participating in our "I Support" program, allowing us to keep offering readers access to our incisive coverage of local news, food and culture with no paywalls.
Make a one-time donation today for as little as $1.