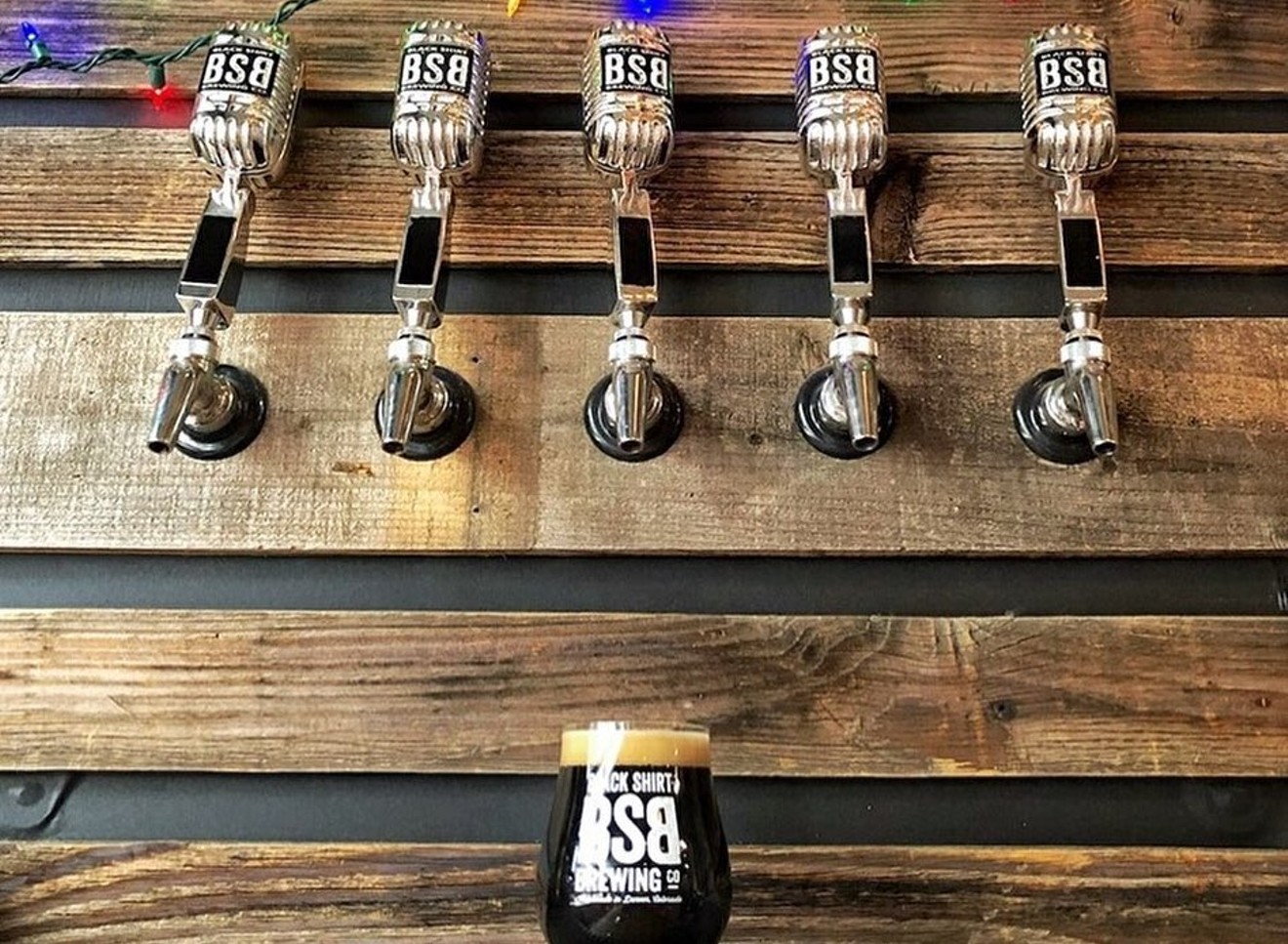 Black Shirt Brewing
Jimmy and Karen Dodson haven't been to downtown Denver much over the past decade or so, they haven't worked in the food and beverage industry before, and they're not that familiar with the craft beer scene. So the newly retired pair from Roxborough Park weren't sure if they wanted to make an offer on Black Shirt Brewing when they began looking for a brewery to buy and run as their next career.

But then they walked inside — and felt the vibe and met the staff.

"They have an incredible crew. We love them. If it hadn’t been for them, we wouldn’t have gotten involved," Jimmy says, adding that he and Karen spent a few months hanging out as customers first. "They work incredibly well together as a team, they're friendly, and the pizza is great. It's a winning combination."

In December, the Dodsons bought Black Shirt, at 3719 Walnut Street, from Chad and Carissa Miller, who started the brewery with Chad's brother Branden back in 2012, at a time when there were still relatively few brewery taprooms in Denver, and when this particular part of the River North Art District was far outside the boundaries of where people ate and drank. Black Shirt Brewing
The Millers steadily grew the business, which featured an iconoclastic mentality and a black-clad Johnny Cash musical ethos, adding an outdoor stage for live music and then a pizza kitchen in 2017, becoming one of the first taproom-only breweries in Denver to convert to a brewpub model. But after a falling-out in 2018, Branden left the company, while Chad and Carissa moved to the Western Slope, running the brewery from afar. They also hired David Sakolsky to take over as head brewer; he remains on the job.

The Dodsons had also planned to start their own brewery back in 2012, when they lived in Evergreen. A Colorado native and a home brewer, Jimmy had lined up both a brewer and a location. But then his company transferred him to Florida, where the couple's three grown children live, and they moved on.

Now both are excited to pick up where they left off — but they plan to take some time before making any changes so that they can keep Black Shirt's feel the same. Jimmy and Karen Dodson are the new owners of Black Shirt Brewing.
Jimmy Dodson
"The first order of business is to not mess things up," Jimmy says with a laugh. "We want to be careful not to make the place about us. We want to spend the first few months learning the people."

Eventually, the pair would like to refresh Black Shirt's two patios and bring back live music. They also plan to add a few TVs inside — though not too many, he says, since this is a "rebel rock-and-rock bar." As for the pizza, they plan to leave that alone, though they may add some different appetizers.

And when it comes to beer, Jimmy acknowledges that although he was a home brewer, he mainly preferred pilsners and isn't that familiar with some other styles. "I have a lot to learn about the beer scene, what's popular and what people want," he explains. But he does plan to bring back some of Black Shirt's original "red ales" and to brew some of its flagships on a more consistent basis.
KEEP WESTWORD FREE... Since we started Westword, it has been defined as the free, independent voice of Denver, and we'd like to keep it that way. With local media under siege, it's more important than ever for us to rally support behind funding our local journalism. You can help by participating in our "I Support" program, allowing us to keep offering readers access to our incisive coverage of local news, food and culture with no paywalls.
Make a one-time donation today for as little as $1.