Board Game Republic Looks to Governor for Help Reopening With Games 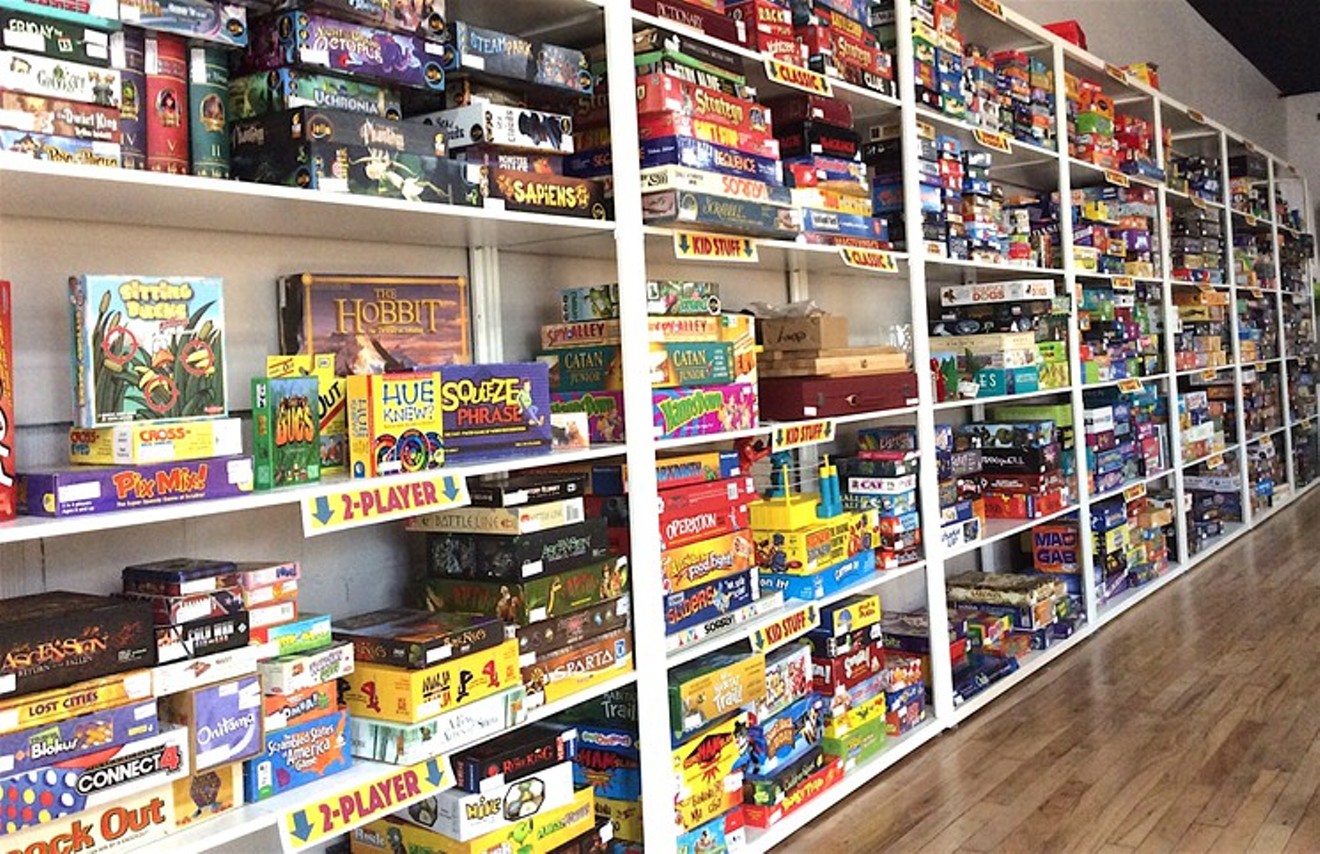 Board Game Republic has been shelved for now. Mark Antonation
Under the latest phase of the state's restaurant and bar reopening guidelines, board games are off the table. That's a tough order for Board Game Republic and similar businesses that serve food and drinks but rely on game fans as their customer base. Keith Meyers, owner of Board Game Republic at 900 West First Avenue, says the rules could make it impossible for him to ever reopen.

Wording in the coronavirus-related restrictions states that businesses must "minimize objects touched by multiple patrons including: Remove/close games and dance floors that require or encourage standing around (darts/pool tables/shuffleboard, arcade games); remove board games."

Board Game Republic has a full kitchen and bar, but without the games, there's no specific draw for the establishment's primary customers, Meyers explains. "Since we are such a niche, I know they weren't thinking of us when the rules were written," he adds.

Most bars that offer games have dart boards, giant Jenga and perhaps a small stack of board games to keep guests amused while they drink. But Board Game Republic has more than 1,000 games. Meyers points out that the restrictions don't give businesses like his the leeway to ensure the safety of customers while being able to earn revenue. He thinks taking certain sanitation measures would make his bar safe. So he initially sent in a proposal to the City of Denver for a variance that would include removing a board game for several days after use. He even said he'd be willing to install an ozone-based sanitizing device.

"We're open to any number of scenarios that would get the doors open," he notes. With so many games available for customers, he thinks it would be easy to remove a game from circulation after it's been used while still giving guests plenty of variety.

The initial attempt to get a variance from the city didn't go well. "We started with the Denver department of health and were directed to the city attorney's office," Meyers explains. "But the city has pretty much shut us down, so we're trying to get the wording changed from the governor's office." He received a letter back, from Deanne Durfee, director of municipal operations for the Denver City Attorney’s Office, stating that variances can only be granted by the state to entire counties, not individual businesses. Here's part of the letter:

Since the State has already issued guidance that board games must be removed from restaurants, I do not see a distinction of why they would grant a variance for your specific business based on your proposal below. If the restaurant association supports a request that all restaurants be allowed to have board games, I would be happy to forward the request to our public health department for their evaluation on whether they would support such a variance request. I am concerned, however, that the State would be unlikely to grant such a variance, in light of the fact that they have already specifically said no board games.

Meyers has yet to hear back from the governor's office on his request to change the wording in the current restrictions, so for now, Board Game Republic, which will celebrate four years in business next week, remains closed. The owner has made all preparations to reopen under the current rules, including removing and rearranging tables to allow for safe distancing and a maximum capacity of fifty people. He says that customers typically come in small groups or families to play games, and there really isn't any intermingling between parties (so there are no Cosmic Encounter pick-up games).

The sweeping restrictions from the state are intended to protect the public from the spread of COVID-19, but many different types of small businesses have been financially impacted, with little recourse for exceptions. Gilpin County received a variance to allow casinos to reopen their slot machines, but video arcades such as 1Up Arcade Bar remain dark because they can't get an individual variance.

The waiting game will eventually end, but many niche businesses will be swept off the table before they can ever get back on board.
KEEP WESTWORD FREE... Since we started Westword, it has been defined as the free, independent voice of Denver, and we'd like to keep it that way. With local media under siege, it's more important than ever for us to rally support behind funding our local journalism. You can help by participating in our "I Support" program, allowing us to keep offering readers access to our incisive coverage of local news, food and culture with no paywalls.
Make a one-time donation today for as little as $1.