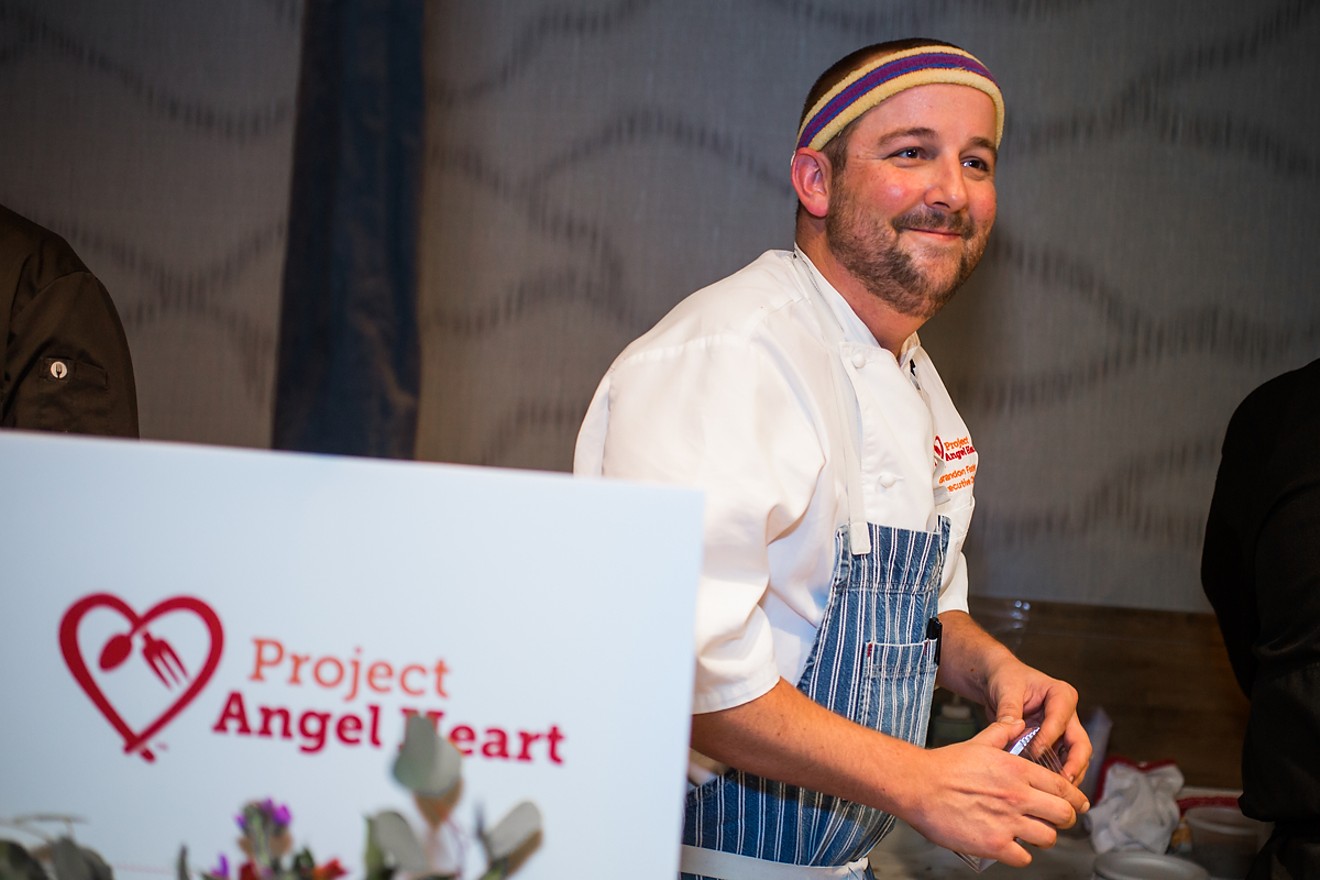 Brandon Foster dedicated the last four years of his career to helping others. Danielle Lirette
The Denver restaurant community lost one of its best and brightest on Sunday, July 5, when chef Brandon Foster passed away while hiking with his family in Summit County. Since 2016, Foster had been the executive chef for Project Angel Heart, a nonprofit organization that delivers medically customized meals to people living with life-threatening illnesses. Before that, he worked at Vesta for eleven years, rising to executive chef during his time there.

During his time as a restaurant chef and nonprofit employee, Foster touched the lives of many colleagues, customers and young cooks looking for a mentor. The chef was known for his kindness, patience and positive nature, as well as for his cooking skills. Here's a video produced by Project Angel Heart that captures Foster's personality and dedication:


A fundraiser has been set up on GoFundMe on behalf of the Foster family, and messages continue to pour out on social media from those who knew him. We reached out to a few of his colleagues and friends to share their thoughts on what Brandon meant to them:


It is difficult to put into words what a loss this is for us and our community. Chef Brandon was a friend and mentor, a passionate champion for our mission who worked tirelessly to make sure as many people as possible could benefit from access to nutritious food. He helped literally thousands of people across Colorado and we are all better for it.


Brandon was one of a kind...honest, decent, kind and true, with an infectious laugh. Our time together, in and out of the kitchen, was non-stop laughs and love. And his food always blew me away; wishing I cooked like that. I’m simply devastated...much like so many in Denver. My heart is breaking for his family and friends.


The restaurant industry truly is the greatest show on Earth. It has thrills and chills, freaks and oddities, as well as unmanaged levels of unbridled stress and excitement brought on by a cast of iconic characters. In the early days of dining in LoDo I ran the kitchen at Jax Fish House and relied heavily upon my allies at Vesta. We opened at a similar time and were the very last outposts on a path that led you from the idyllic safety of downtown Denver to parts unknown on the wrong side of the tracks. We were our own three-ring circus under the big top of youthful exuberance.

Matt Selby, Wade Kirwan and I were inseparable in those days. The camaraderie born out of necessity became a lifelong friendship that exists today, and it was through this connection that I came to meet a host of incredible humans who got their start in the hallowed halls of Vesta's kitchen. So many incredible people crossed paths with my life and include Brandon Biederman, Connor Gushen, John Hinman, Jeff England, Drew Hardin, Nadine Donovan, Cliff Blauvelt and of course, Brandon Foster.

We lost Brandon this past weekend, but what we really lost was an enigmatic figure who left a wake of positivity with the passing of each day. Rarely does one meet someone so beloved because of the sheer strength of their humanity. Over the last couple of days I was struck by how many degrees of separation there are between my friendship with Brandon and the countless lives he touched personally and professionally. Seeing the seemingly endless posts on social media sites depicting the love we all have for this incredible human made the impact of this loss that much more surreal and unmanageably saddening. I've come to see that Brandon was everywhere and always armed with a smile, kind word and that infectious laugh.

As a friend, husband and father, it's simply too much and hits too close to home.

We shared a lot of passions, from cooking to backcountry winter adventures, but it was those private moments that are so rare due to the rigors of a professional's schedule that keep cycling through my mind. Little opportunities we've had to connect meaningfully over the last two decades have touched me in ways I never realized until the sad news of his passing hit us all earlier this week. This past spring I finally got Brandon out on my sled for a day of nabbing lines at Jones Pass. He brought breakfast beers and sandwiches and was giddy for the experience because he had only ever skinned in and had never gone out via a snowmobile. His brother Aaron, another enigmatically positive figure in this community, was left hung out to dry as I only had room for one, but I assure you Aaron, we'll get out this season for a proper session. We had an incredible day born of his enthusiasm and our collective knowledge of the zones we were riding. Fresh pow lines, emotionally charged conversations about the industry and plans for a grand adventure at Sheepshead Cabin next season ruled the bluebird day. I will never forget the stoke he generated for us both simply by being himself. The same holds true for every interaction I've ever had with Brandon. I didn't know then that this would be the last time we would hang out together outside of work life, but even if I did I don't think a single aspect would have changed. Brandon lived life to its fullest and dragged all of us out of our distracted morass of emotions to his level of love for life. For that, I'm truly grateful.

We miss you brother. Terribly.

Brandon embodied the very spirit of hospitality in that he truly lived to make your day. Go peacefully, chef, and know we will carry this torch in your name.


In the summer of 2015, over lunch, Brandon told me he loved his work, but he felt a deep desire to do something for the greater good — like me, he said (I was the exec at Project Angel Heart at the time). He asked if I knew of anything available that might compare. I did not; until a few months later when Penny and I made the decision to move out of state. Brandon was my first call when I got back to Denver from buying our B&B, and I supported him in his eventually successful quest to become the new exec at Project Angel Heart.

The fact that he came to me says volumes about Brandon as a person. He could’ve worked anywhere, led any kitchen; but he chose to use his talents for the greater good. I am so proud to have known this amazing person whose heart was as big as his kitchen. He was more than a chef. He was a loving family man, a leader and a truly great guy. I will miss the hell out of Brandon Foster. May he forever be remembered as the hero he was.


Brandon had a special way of bringing people into the Vesta family and making them feel a sense of belonging right away. Brandon was always a positive force and was loved by everyone who worked for him and alongside him. Chef Foster’s leadership style was natural, genuine and instinctive. He was a mentor to many and wanted those around him to succeed, to laugh, to dance to the music and have fun along the journey. Upcoming cooks wanted to be in his club. He was passionate about food (specifically charcuterie), sourcing and sustainability, but more than anything, he cared about people — he really cared and took genuine interest. Brandon was a big brother to so many of our Vesta staff members, showing them the way around the kitchen, the restaurant community and how to grow up but stay young at heart.

Over 23 years Vesta has taken on a life of its own that grew well beyond any vision or intention I ever imagined. For that to happen you have to be lucky enough to meet people like Brandon who fuel that love light and brighten it. He embraced and passed on the Vesta Vibe and brought his passion and desire to serve to the entire Denver community through Project Angel Heart. We are forever grateful.


There is no question that Foster was remarkably skilled in the kitchen. When I think of foods that inspired him, root vegetables, wild mushrooms, lamb shanks, tomatoes and ramps come to mind. He also had a very real passion for charcuterie, training with Craig Diehl in Charleston to help launch Vesta’s very underrated dry cure program. He was a natural leader. Dozens of industry folk around this city call him a mentor and a role model; both in and out of the kitchen.

But where he truly excelled in life was as a human being. What I mean by that is he was the extremely rare breed that showed the positive side of the human spirit. He left a memory on everyone he encountered. He listened. He cared. He walked the walk.

I had the privilege of getting to know him on a different level. We traveled to events together, eating stupidly good meals around the country along the way. Often, would have a quick beer after services at Vesta and Beast. Of course we would talk food, but more often than not the conversation would switch to baseball, fatherhood, how to try and achieve a work/life balance, and how to better care for our staffs. This is a man who stepped down at Vesta so he could spend more time with his family, and in time, Larissa could start her own business too. He was selfless. He put everyone before himself.

I started mentally making a list of all the things Foster loved. My mind raced for hours rattling off everything from the Broncos and National Lampoon's Christmas Vacation to 7-Eleven hot dogs. Then I focused on what Brandon didn’t like or made him unhappy. I am still trying to think of one thing in that category. He found joy in every morsel of life. He shared that joy with those lucky enough to know him and I am so proud I could call him “friend."

The world has never seemed more upside down than in its current climate. There is so much hate, deceit and sadness right now. Brandon Foster was none of those things. My favorite Vesta bartender started a hashtag yesterday, #belikebrandon. There's never been a better time to emulate his love of food, family and life.