Luki Brewery's Adriana Terron. Adriana Terron
Adriana Terron was hoping to get a job as a bartender when she filled out an application at Luki Brewery in September 2020, just a few months after the taproom had opened in Arvada. "I was excited because it was close to where I lived," says Terron, who had bartended previously for Resolute Brewing. "They had hired everyone for front-of-house already, however. But they were hiring in the back."

Much to her own surprise, Terron took a job as a brewer's assistant, helping with everything from cleaning tanks and cellaring beer to moving ingredients and operating the brewhouse. "I'd heard that it's a hard industry to break into, so to be hired with just home-brewing experience was super exciting."

It was a physical job, but it also involved learning about scientific principles, something that was very different from her school background as an English major at the University of Colorado and from her work over the previous decade, which ranged from bilingual tutoring to soldering at Lockheed Martin. Adriana Terron's first beer is Sippin' Silos Coffee Blonde Ale.
Luki Brewery
As one of the perks of the job, Luki Brewery owner Jeff Smith purchased a membership for Terron to the Brewers Association, the primary trade group of craft breweries nationwide. It was a membership that would help Terron move past her role as a brewer's assistant just recently to become a full-fledged brewer at Luki. Her first solo recipe, Sippin' Silos Coffee Blonde Ale, tapped last Friday.


But last fall, the BA, like many other organizations, was struggling with what to do about the lack of diversity and inclusion in its industry (and taking criticism for its own policies and practice as well), especially in light of the introspection that was going on across the country after the murder of George Floyd and during the equality-related protests and discussions that came about as a result.

As part of its answer, the BA created a twelve-week virtual mentorship program that it said was designed to "increase the diversity of the workforce" in small breweries and to advance leadership and ownership for people "experiencing barriers to access or advancement" in the industry, including women and people of color. Led by Dr. J Nikol Jackson-Beckham, the BA's equity and inclusion specialist, the program would pair mentees with experienced industry professionals who could offer "assistance and advocacy" in everything from technical brewing, serving and tasting beer and brewery safety to event planning, human resources, guest services, management, marketing, sales and distribution, and finance. 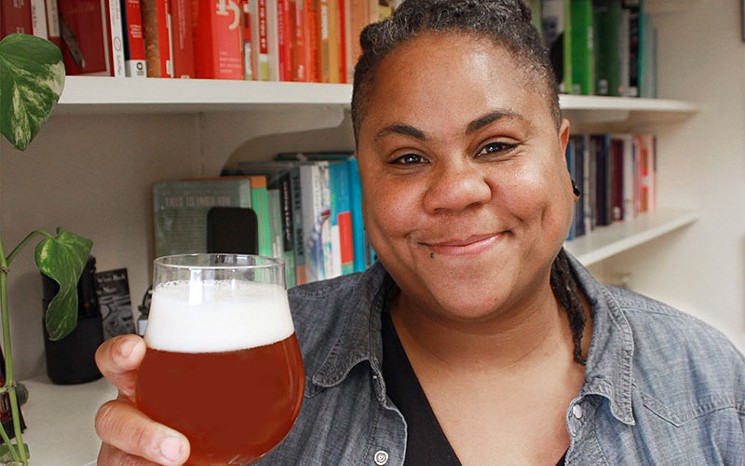 Dr. J Nikol Jackson-Beckham is the BA's equity and inclusion specialist.
Brewers Association
Terron heard about the program through her membership in the BA and applied last February for the inaugural class. Out of 270 applicants in that first round, she was one of just thirty who were selected. (A second round of mentees will begin their program at the end of September.) Terron, who identifies as Latina, says her background as a bartender, her volunteer stints at beer festivals, her home-brewing background and her level-one Cicerone certification probably helped her cause.

Since the program is virtual, Terron — the only Colorado representative in the group — was assigned five mentors in her chosen subject areas: technical brewing, finance, sales and marketing, guest experience, and sensory. They lived in a variety of states, from New York to Michigan to Georgia, and came from different backgrounds. "It was an interesting mix, and everyone knew so much," Terron says. "I was really impressed, even by people who weren't brewers or didn't work in breweries."

One of her favorite mentors was Jen Blair, an Atlanta-based beer blogger, podcaster and national beer judge who also serves on the American Homebrewers Association Governing Committee. In addition, Blair runs a free training program for women who want to become certified beer judges.

The thirty participants in the BA's inaugural mentorship class.
Brewers Association
Blair says she applied to be a mentor as soon as she heard about the program. "It's important to me that historically excluded people in the brewing industry...including women, BIPOC, AAPI and LGBTQIA+ ... have access to people who look like them and who have similar lived experiences," she says. "When people see people who look like they do, who have similar experiences as they do, creating beer for them, they are more likely to spend money where those people work. Local economies grow, which means jobs grow. There's not a downside to making the brewing industry more diverse."

The mentorship program gives participants "the opportunity to ask whatever questions they have in a safe space where their questions are welcomed and treated with respect," she continues. "I was able to answer questions ranging from how to describe beer to the supply chains involved in the brewing industry. It is a learning experience for the mentors, as well — I had several questions posed to me that made me pause and think, why is it like this? Who did decide these are the rules?"

Terron is now enrolled in Blair's BJCP training program and plans to take her tasting exam in Fort Collins next month. "I wouldn't have done that if it hadn't been for Jen," she says. "It was cool to see a lot of women in the program who were opening their own breweries and starting their own things."

Jen Blair is a mentor in the BA's new program.
Under the Jenfluence
Luki has been a good spot for Terron; she says she enjoys working with the owner, Smith, as well as the other brewer on staff, Michael Buchkoski. But "being a woman in this industry can be difficult," she points out, and sometimes the lack of women in the brewhouse can be tiring.

So can the constant cleaning and monotony of brewing, which is why she appreciates that fact that Smith has given both her and Buchkoski the chance to design and brew their own beers. "Being able to learn something new...it really helps the eagerness and desire to push yourself."

As a result of that, and of the mentorship program and people like Blair, Terron says she will likely stick with her new career. In fact, she's already working on her next new beer.
KEEP WESTWORD FREE... Since we started Westword, it has been defined as the free, independent voice of Denver, and we'd like to keep it that way. With local media under siege, it's more important than ever for us to rally support behind funding our local journalism. You can help by participating in our "I Support" program, allowing us to keep offering readers access to our incisive coverage of local news, food and culture with no paywalls.
Make a one-time donation today for as little as $1.