Byte Bars
“We're the new kids on the block,'' says Casey Nunnelly, who launched the energy bar company Byte Bars with her cousin and fellow University of Colorado Boulder alumna Sabina Rizzo in 2019.

Rizzo is a former competitive skier, and Nunnelly was a softball and volleyball player in high school and captain of the CU women's hockey team when she was a student. “When we were growing up, we ate Clif Bars, and they would weigh you down, and then the protein bars were always super macho," Rizzo explains. "Then there's the thin bars that target women only for diet purposes."

“As Gen Z and millennial females, we felt like none of the energy bars on the shelves spoke to us. We wanted to give the energy bar market a makeover,” adds Nunnelly, who started by experimenting in Rizzo's kitchen, mixing together ingredients like peanut butter, coconut, almond paste and dates to create a raw bar. 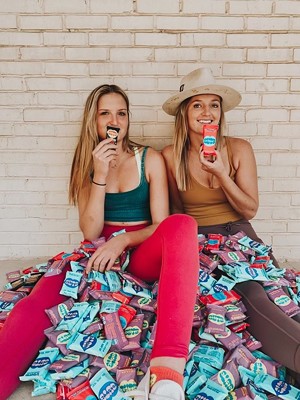 Cassey Nunnelly and Sabina Rizzo launched Byte Bars in 2019.
Byte Bars
Eventually, the two perfected the Byte Bars recipes, which now include four flavors: Choco Chip, Cinna Cherry and Peanut Butta, as well as a new protein bar, Lemmy Razz. All of the Byte Bars are made with a peanut butter and date base and are gluten-free and vegan.

The name, Byte, is an acronym for "Be Yourself Today and Everyday," which is the motto that drives the company. "We are innovating stuff that’s a little outdated," Rizzo notes.

In the fall of 2020, Byte Bars hit the shelves of Whole Foods stores in Colorado. Growing a business during the pandemic has been challenging — Nunnelly and Rizzo couldn’t go to sampling events or provide in-store demos. "We were learning with the rest of the world,” Rizzo says.

Byte Bars' presence is set to grow again: This summer, it will be sold online through Urban Outfitters, and it's being added to Kroger stores in Colorado starting this fall.

Now the cousins are focused on adding more retailers nationwide, but it's not all about revenue for the duo. They are also prioritizing having a positive impact on the community. Byte Bars currently donates to the community food share in Lafayette, and the company is a sponsor for the upcoming Colfax Marathon on May 14 and 15. It's also working with CU Boulder students, training them to be Byte Bars brand ambassadors.

Byte Bars are currently available in Colorado Whole Foods locations, Marczyk Fine Foods, Leevers Locavore, at many local coffee shops, and directly through the company's website. For more information, visit bytebars.com.
KEEP WESTWORD FREE... Since we started Westword, it has been defined as the free, independent voice of Denver, and we'd like to keep it that way. With local media under siege, it's more important than ever for us to rally support behind funding our local journalism. You can help by participating in our "I Support" program, allowing us to keep offering readers access to our incisive coverage of local news, food and culture with no paywalls.
Make a one-time donation today for as little as $1.