Cart-Driver's late-night deals get you a cheap dinner. Laura Shunk
I grew up in Denver, but the one thing I’ve been unable to readjust to since moving away and returning is this city’s early meal schedule. No, I don’t want to join you for an 11 a.m. lunch — that's the middle of the morning, when we should still be working our way through a pot of coffee. And while I can understand that such an early lunch coupled with an early close-of-business time is what begets the 6 p.m. dinner, I don’t understand why more diners don't hold out until 8 p.m., ready to take abandoned tables on a second turn.

Denver’s early-dining habit ruins things for those of us who don’t get hungry until later; too many dining rooms close at 9 p.m., and late-night options, while improving, are still too sparse. If your appetite doesn't ramp up until 10 p.m., a perfectly reasonable dinner hour in many other cities (especially the East Coast), you might end up choosing between fast food and whatever you can scrounge up at the grocery store.

There’s at least one place in this town where it pays to be a night-owl, though, and that’s Cart-Driver. The tiny wood-fired pizzeria built into a shipping container always feels full, but never is it more lively than between the hours of 10 p.m. and midnight, when it puts out a roster of happy-hour deals that lures in a thrumming crowd, heavily composed of industry types getting off shifts at nearby eateries.

During these hours, Cart-Driver runs a tight $5 menu: You can score a $5 daisy pizza, a $5 rye Manhattan and a $5 pilsner with a shot of fernet (upgrade to Underberg for a dollar more). Finally, there’s the $5 sardines and freshly baked bread, served with butter and sambal.

Look down the tables, and you’ll note that everyone’s eating their own daisy pizza. This is Cart-Driver’s answer to the Napolitano-style margherita pie, its thin crust charred by the lightning-hot oven, slicked with tangy tomato sauce, dotted with bubbling mozzarella and sprinkled with oven-crisped basil. Dab it with a little vinegar-forward house hot sauce and pair it with a Manhattan, and you have what’s normally a $22 meal for $10. 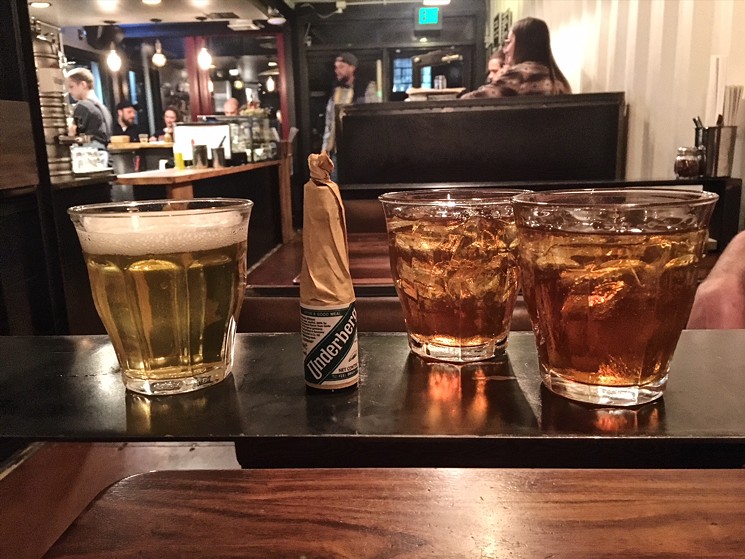 Late-night happy-hour Manhattans and a beer-and-Underberg combo.
Laura Shunk
For us, though, it’s the sardines that represent the ultimate late-night luxury. Not explicitly on the menu during regular hours (though market-priced seafood conserva in a similar setup is available), this platter pits the salty fish against olive-enriched butter and spicy sambal (like sriracha plus shrimp paste). Completing the board is Cart-Driver’s excellent piada, a flatbread fluffed up and blistered in the oven and served hot. And if the restaurant runs out of sardines (as it did when we were there recently), fear not: It'll sub a sardine pâté — "a gateway drug to sardines," as a dining companion noted.

Cart-Driver offers its happy hour nightly, including on the weekends. So while it’s busy on weeknights, come Saturday it can be hard to find a seat. The deals are good enough to encourage regular late-night dining; here’s hoping the crowd’s good enough to convince other eateries to follow suit with late-night options.

By the way, early birds should note that Cart-Driver also offers an afternoon happy hour from 3 to 6 p.m., and deals then are more tailored to pre-dining aperitivo hour: $5 tap Prosecco, $5 negronis and $5 for two oysters.