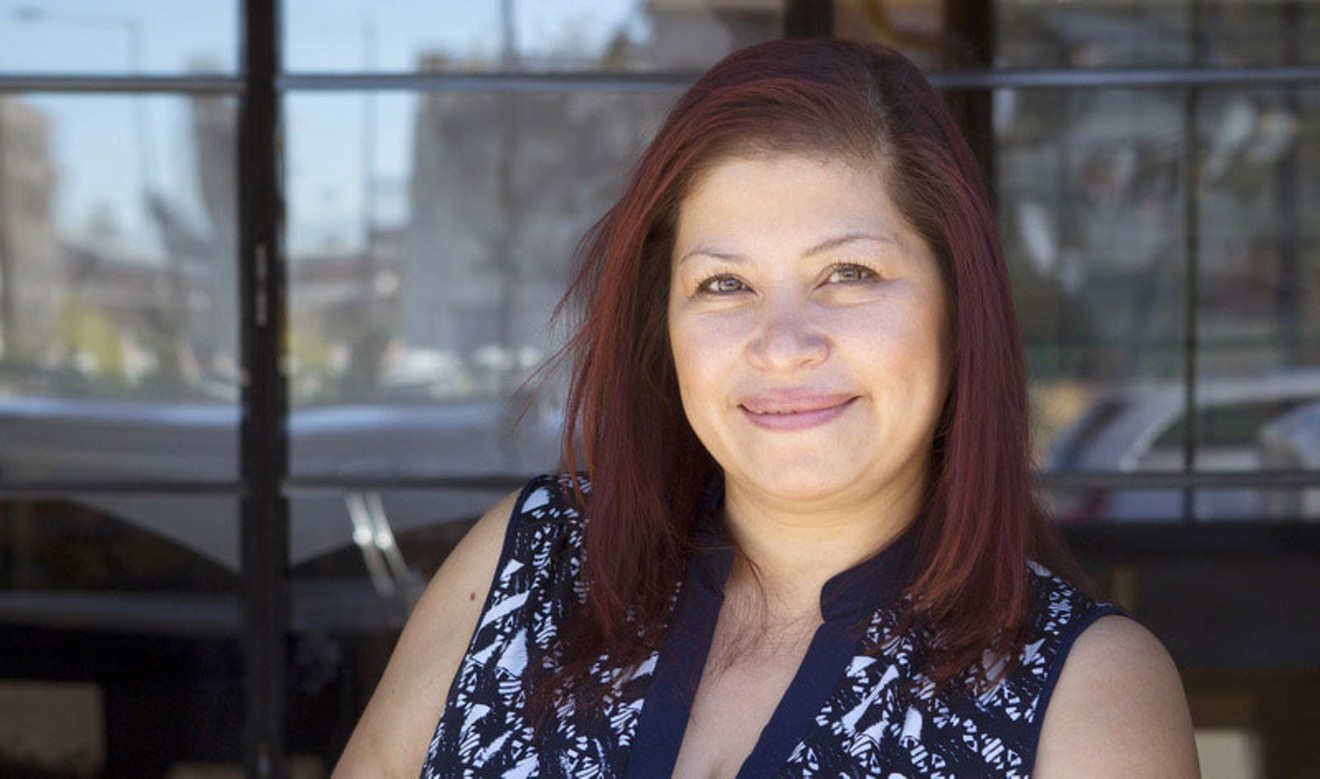 Chef Dana Rodriguez learned to cook while growing up in Mexico. Courtesy of Work & Class
Three days ago, Dana Rodriguez nixed the soup at Super Mega Bien. The decision sounds like a no-brainer — who wants soup in June? — but this wasn’t just any soup. Hot stone stew had become a staple on the otherwise fluid dim sum menu, drawing people to the pan-Latin spot as much for the novelty of watching a 600-degree stone cook soup before their eyes as for the spicy seafood broth itself.

But I’m not sharing a picnic table on Super Mega Bien’s patio with this repeat James Beard Best Chef Southwest nominee to talk about the pros and cons of cutting the hot stone stew. I’m here to chat about another soup that’s been a staple in not just her restaurants, but her life. “Music and food are the things that remind people of good moments in their lives,” says the 44-year-old chef, who was born in Chihuahua, Mexico, on a farm without running water or electricity. For Rodriguez, that good-moments food is pozole, an earthy soup her family made with dried guajillo chiles, whatever protein was on hand, and fat nubs of hominy that they nixtamalized themselves. It was the food of Sunday gatherings, left on the stove before church so that it was ready when they got home, and easily thinned when neighbors or cousins dropped by.

The unwritten ingredient, passed down by her mother, was hospitality. “She’d say, ‘When people come to your house, you need to have something to offer,’” Rodriguez recalls. Look closely at her restaurants — Super Mega Bien, which won the Best New Restaurant award in the Best of Denver 2019, and Work & Class, Readers’ Choice for the Best New Restaurant in the Best of Denver 2015 — and you’ll see her mom’s words infusing both their welcoming atmospheres and menus (dim sum and meat by the pound) that make it easy to feed groups of any size.

Rodriguez has made it big locally and nationally, and now enjoys the kind of success you’d expect for someone who knew at a young age what she wanted to be and did everything in her power to achieve it. But cooking was never the plan. By 1998, she’d made the difficult choice to leave the border town of Juárez, where she’d settled with her parents and children, and follow family to Colorado. “Borders are always pretty dangerous. They’re really hard for women; they start disappearing,” she says. “For me, as a single mom with three daughters, I wanted a better future for them.”

Looking for work, her own future seemingly on hold, this former engineering student found herself applying for jobs well beneath her skill set. To say that luck played a role in what happened next would be to discount decades of long hours and hard work. Still, what started as a do-whatever-it-takes job to support her family took an unexpected turn when Rodriguez found herself washing dishes at Panzano, one of the city’s top Italian spots, and one with a history of badass female chefs. One of them, Jennifer Jasinski, would become a mentor and lifelong friend.

Odds were against Rodriguez. The language barrier was real — she turned down two promotions to sous-chef because she wasn’t confident in her English — as was the testosterone-heavy kitchen culture, even at Panzano. “The machismo of Latino guys, they didn’t want me to be their boss,” she recalls.

Determined to earn their respect, she vowed to work harder than anyone else. “If you can butcher two lambs, I can do four,” she says. “If you can carry this chicken case, I can do double.” Dana Rodriguez pouring hot stone stew tableside at Super Mega Bien.
Danielle Lirette
Rodriguez stood out for her curiosity and work ethic and moved through the stations, learning pasta, meat and fish. As she did, she faced a different kind of obstacle: her lack of familiarity with the ingredients. “I had no idea what chef was talking about,” she says, ticking off then-unfamiliar items like jamón serrano, blue cheese and prosciutto. “I started tasting and eating. I wanted to learn more.”

She did, and the third time Jasinski — herself a James Beard Best Chef Southwest winner — asked Rodriguez to be sous-chef, she accepted. Later, she’d go on to hold prestigious sous-chef and chef de cuisine positions at two of Jasinski’s own high-end restaurants, Rioja and Bistro Vendôme, mastering Mediterranean and French cuisines in the process.

But pozole remains close to her heart, “one of the things that I remember most from my childhood,” Rodriguez says. “That was the tradition: Go to church and then you eat all together.” Fresh flour tortillas, made by her dad, rounded out the meal. “And Mexican Coca-Colas — they were always on the table,” she recalls.

Rodriguez is full of passion — her nickname is “Loca” — and she expresses herself with her whole body. A strand of thick, dark hair, freed from the ballpoint pen holding it back, bobs with her head for emphasis as she describes her early years. On her wrist, a silver bracelet — aptly engraved with “BOSS BABE” — flashes in the afternoon sun.

An only child, Rodriguez learned to cook from her dad because her mom worked long hours in the family grocery stores. Given Rodriguez’s own commitment to her career, her daughters — now ages 22, 23 and 24 — have taken over making the pozole. “We say now it’s for hangovers,” Rodriguez says with a laugh. That, and holidays like Christmas, Thanksgiving and family reunions. “We make pozole to keep the tradition,” she explains.

Come fall, red pozole with lamb will reappear at Work & Class, and an unconventional green version with poblanos and tomatillos will return to Super Mega Bien. Until then, try this red pozole at home, where it might become part of your own family’s tradition.

Remove the stems and seeds from the dried peppers. Peel the onion and cut it in half. Put the peppers, onion and whole, peeled garlic cloves in three quarts of water. Cover and simmer for 30 minutes. Let cool for 15 minutes, then put it in the blender to make a red salsa. Add the spices and blend well. In another pot, heat the oil over low heat and add the red salsa. Cook for 10 minutes. Add the shredded chicken and hominy and simmer for 10 more minutes. Taste for additional seasoning. (You might be tempted to take a shortcut with canned enchilada sauce, but don’t; the result won’t be the same. You can, however, substitute canned chickpeas if hominy isn’t your thing.) Serve with tortilla chips, cilantro leaves and lime wedges.

This is the first in a series of interviews with immigrant chefs. To suggest subjects, email Gretchen Kurtz, Westword’s former food critic, at [email protected]
KEEP WESTWORD FREE... Since we started Westword, it has been defined as the free, independent voice of Denver, and we'd like to keep it that way. With local media under siege, it's more important than ever for us to rally support behind funding our local journalism. You can help by participating in our "I Support" program, allowing us to keep offering readers access to our incisive coverage of local news, food and culture with no paywalls.
Make a one-time donation today for as little as $1.