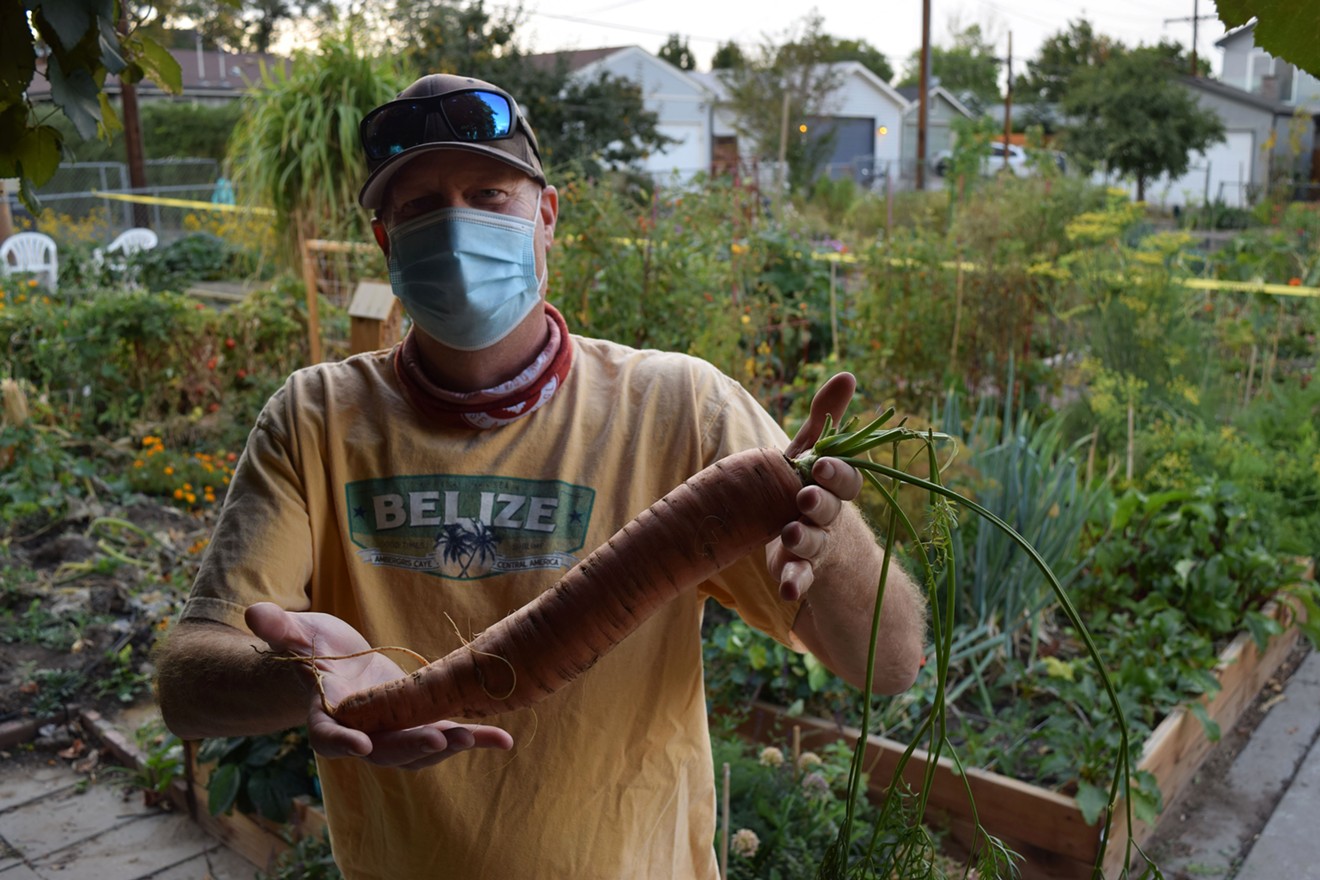 Ted Richardson, a garden leader at El Oasis, hopes to prevent the land from being sold. Claire Duncombe
Denver Urban Gardens plans to sell most of the land where it operates El Oasis, one of its Highland neighborhood gardens, to Caliber Construction in a $1.2 million deal set to close on December 1. But members of El Oasis, located at 1847 West 35th Avenue, are fighting the sale by raising public awareness in hopes of pressuring Caliber Construction to back out while the agreement is still under contract.

The money from the sale is intended to help DUG alleviate accumulated debt and continue to fulfill its role in offering gardens on more than 180 properties around the city, according to Ramonna Robinson, president of the nonprofit's board. DUG informed El Oasis gardeners of the planned sale on September 9, with notices to vacate  plots on the two-thirds of the land that Caliber will take over by October 5. The remaining third of the land will remain a garden in perpetuity. The gardeners, many of whom have tended El Oasis plots for years, believe that DUG has fundraising options other than selling the land, but DUG says that without the sale, the nonprofit will cease to exist.

El Oasis currently hosts 43 garden plots, all cared for by individuals and families living in the surrounding neighborhood. The scene is a reflection of DUG’s mission to use “gardens as extraordinary places for learning and healthy living.” Multi-generational families and friends are able to share a bond through the insights and joys of gardening.

“Even in its beginning forty years ago, [the land was] a place for the community to raise food,” says Alan Olds, an El Oasis garden leader. The plot was originally cultivated by Trini and Sam Zamudio in the 1960s and ’70s; they transformed what had previously been a junkyard into a vegetable garden to feed their family of ten and their neighbors. Soon, more families began to farm the land.

Trini Zamudio helped start the garden in the 1960s and ’70s, before it was part of Denver Urban Gardens.
Claire Duncombe
In 1985, a company called Visiting Owl bought the property for $52,000 with the intent of building subsidized housing for senior citizens. When the City of Denver refused to authorize the needed zoning permits, general manager Rohn Hyde decided to support the community-initiated garden instead, and sold the 21,800-square-foot property to DUG for $1 on December 29, 1988. According to Jim Rodriguez, a real estate agent and El Oasis community member, the deed has no restrictions; the deal was done in good faith, on the assumption that the space would remain a garden in perpetuity.

In recent years, DUG has faced increasing financial hardship. According to Robinson, much of the organization's current debt stems from borrowing against its line of credit and being unable to raise enough funds through donations to cover those expenses. Between 2014 and 2018, approximately $50,000 to $60,000 in annual funding was cut from DUG's Grow a Garden program while a $100,000 national grant for its Healthy Seedlings program ceased, she explains.

Additionally, DUG often needs to spend more money at the beginning of every gardening season, but “a lot of our funds come in later during the year,” she continues. Further, she says, because of an increased need for gardens in the community, the organization added 59 new gardens between 2014 and 2018.

On September 12, Dr. Violeta Garcia, DUG's executive director, wrote an apology letter to the community explaining that, shortly after she started in her job late last year, she found DUG to be insolvent on paper, without cash reserves and with a grants pipeline of only $10,000 to apply for in January. “We realized as the board,” explains Robinson, that the options to pay down that debt were “fundraising or selling an asset. The asset we came to through a very difficult decision.” 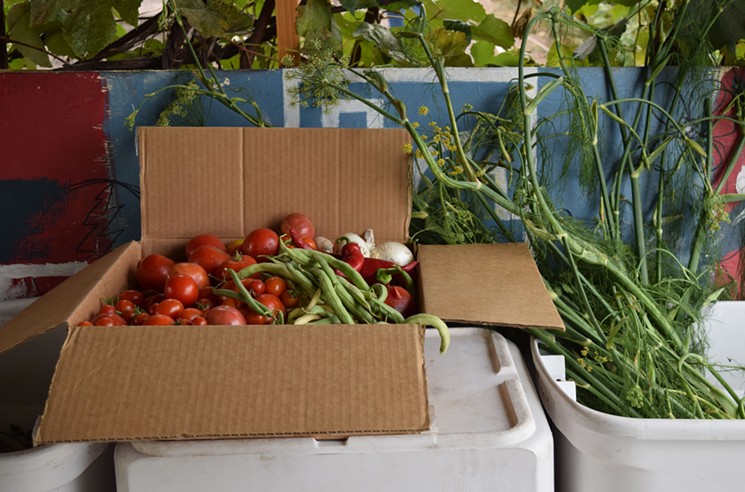 Extra food from El Oasis is donated to Bienvenidos Food Bank as part of DUG's pledge to help those with low access to fresh produce.
Claire Duncombe
El Oasis has served as collateral for DUG's line of credit since 2013. But garden members insist that the organization didn't have the right to use the land as collateral, much less sell it. “I think their responsibility is to act as stewards of the land,” says Rodriguez.

But on the Denver Urban Gardens website, the nonprofit explains that the sale must go through in 2020 or “DUG will cease to exist, resulting in the loss of not only El Oasis Community Garden, but also 180+ other gardens throughout the six-county metro area.”

The website also notes that the precarious nature of DUG's financial situation was exacerbated by COVID-19’s effect on the fundraising world. But many of El Oasis's gardeners take issue with this line of reasoning. “The current situation involves an all-or-nothing approach: Sell this and get $1.2 million to cure our problems,” Rodriguez says. “Maybe it doesn’t have to be one size fits all.” Julie Kinamore says that gardening at El Oasis sparked a passion in her that she never knew existed.
Claire Duncombe
Or they could look to other fundraising potential within the El Oasis community and neighborhood. “We’re trying to add some input to this process," Olds adds, noting that there are "businesses in the community who might be able to help.”

More solutions could have been offered, “if they’d only come to us” instead of keeping the land sale secret throughout the summer, Olds continues.

Since they finally learned of the deal, El Oasis members have built a website and started a petition to raise public awareness about the sale. They hope that Caliber Construction will realize the importance that the garden has to the neighborhood and back out. (Caliber has not responded to a request for comment.)

According to DUG, the sale is final — but Rodriguez says that nothing is final until the closing date. And until then, community members plan to fight to save their garden.
KEEP WESTWORD FREE... Since we started Westword, it has been defined as the free, independent voice of Denver, and we'd like to keep it that way. With local media under siege, it's more important than ever for us to rally support behind funding our local journalism. You can help by participating in our "I Support" program, allowing us to keep offering readers access to our incisive coverage of local news, food and culture with no paywalls.
Make a one-time donation today for as little as $1.
Claire Duncombe is a Denver-based freelance writer who covers the environment, agriculture, food, music, the arts and other subjects.
Contact: Claire Duncombe