Reader: It Is a Shame the Coors Family Sold Out Coors.com
At the end of October, Molson Coors shocked Colorado by announcing that it would close its central offices in Denver, lay off hundreds of employees here, and relocate everything to its existing space in Chicago as part of a massive restructuring and name change aimed at keeping the corporation competitive.

MillerCoors, the entity formed in 2008 when Coors merged with Miller, will be folded into Molson Coors Beverage Company as of January 1. "Our business is at an inflection point,” Molson Coors CEO Gavin Hattersley said in a statement posted on Behind the Beer, the MillersCoors blog. “We can continue down the path we’ve been on for several years now, or we can make the significant and difficult changes necessary to get back on the right track.”

A track that leads away from Colorado, leaving behind some sore losers. Says Brendan:

It's pretty good right from their tap at the brewery out in Golden. Aside from there, I don't drink it much.

Fucking beer snobs suck. Yeah... I like craft beer too, bro. But it's $8 a goddamn beer anywhere you go now. Banquet is a good, cheap lager that tastes like many Prussian/German lagers of the 19th century.
Quit being pussies and thumbing your noses at honest, not "craft," beers. Your handlebar mustaches and IPAs suck worse.

Jeff brings the focus back to business:

The headquarters is moving to Chicago but the brewery isn't. It is a shame the Coors family sold out. Budweiser selling out to the Belgians really hurt St. Louis. The economy still hasn't come back. Charities suffered, etc.

Reminds me of what happened to the Jolly Rancher candy company. Sold to big company,  everything was moved out of state, including all the jobs. Site sat as a vacant lot for years and is now being redeveloped.

I understand the brewery is still operating but the family sold their soul. 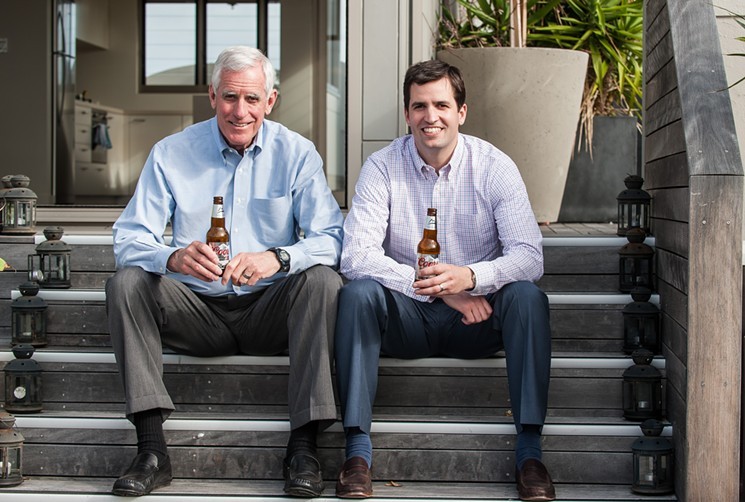 Pete and David Coors.
MillerCoorsblog.com
At the same time it explained the business move, the MillerCoors blog also shared this: “At the end of 2019, Pete Coors also will retire as the company’s chief customer relations officer, stepping back from his day-to-day duties at the company. He’ll continue to serve as vice chairman of the Molson Coors board and as an ambassador for the company.”

The family has stayed silent about the recent changes, but in an interview with Jonathan Shikes two years ago, Pete Coors gave a hint of how he might feel about the rest of the business operations moving from Colorado, where they've been based for 140 years. “I’m probably going to get into trouble for saying this, but one of the biggest mistakes we made was moving it to Chicago,” Coors said. “We lost the connection to the brewery. Knowing the beer, being able to smell it and taste it in this environment. It’s important."

Is Coors important to Colorado? What do you think of the move? Post a comment or email your thoughts to [email protected]
KEEP WESTWORD FREE... Since we started Westword, it has been defined as the free, independent voice of Denver, and we'd like to keep it that way. With local media under siege, it's more important than ever for us to rally support behind funding our local journalism. You can help by participating in our "I Support" program, allowing us to keep offering readers access to our incisive coverage of local news, food and culture with no paywalls.
Make a one-time donation today for as little as $1.