Paul Reilly (left), JP Taylor and Aileen Reilly are serving takeout at Coperta and are nearly ready to welcome customers. Courtesy of Coperta
At the beginning of the coronavirus epidemic, action — of any kind — seemed necessary. On March 17, after restaurants and bars across the state were ordered to close their dining rooms, many of them began offering takeout and delivery, even high-end eateries that had never offered that type of service. And when the federal government began distributing Payroll Protection Plan loans to help small businesses retain employees, restaurant owners again sprang into action, signing up for the short-term program — the forgivable loans were intended to be spent in eight weeks — even though most of their employees couldn't come back to work because on-premises dining was forbidden. And when Colorado finally lifted the restrictions on May 27, restaurateurs were quick to rearrange seating, install plexiglass and welcome back customers, because the bills still needed to be paid after two months of little or no revenue.

Through it all, two Uptown eateries sat mostly silent. At Beast + Bottle, a Saturday farmers' market hosted by chef/co-owner Paul Reilly sold produce from Ollin Farms outside the restaurant. But there was no curbside pick-up, no third-party delivery service zipping food to Beast + Bottle regulars. And the scene was the same just a few blocks away at Coperta, the Italian restaurant that Paul runs with his sister, Aileen Reilly, and his brother-in-law, JP Taylor.

Despite the quiet, though, the owners weren't sitting by idly. "I call it a very patient reopening," Paul explains. "We wanted to be very calculated and measured about how we did the openings. We didn't see opening in March as a financial opportunity at all."

And there were also the health and safety considerations. "The day we closed was one of the hardest days of my life," Aileen notes. "Even May 11 seemed so far away," she says of the original Denver reopening date set by Mayor Michael Hancock.

But the two were both too worried about exposing their employees to unsafe conditions to jump back in quickly. "When this all happened, it was just such a sucker punch," Paul adds. "I had a really hard time slowing down. I would wake up every morning and beat myself up that I wasn't doing enough for our people. So I got on the horn and on email and started lobbying people."

Aileen and Paul Reilly hope to reopen Beast + Bottle soon.
Mark Antonation
Early on, the Reilly siblings got involved with a national movement called the Independent Restaurant Coalition, which was formed to send a message to Washington, D.C., that the restaurant industry, one of the nation's largest employment sectors, needed long-term help, not short-term patches. The result, Paul points out, is a $120 billion stabilization grant bill called the RESTAURANTS Act, introduced in Congress on May 20 by Representative Earl Blumenauer of Oregon.

The early patience exhibited by Paul and Aileen paid off in late May and early June. A second round of PPP loans was offered, and this time Beast + Bottle and Coperta got them. They were also approved for an Economic Injury Disaster Loan, another federal program that was expanded for pandemic-specific use. And on June 5, Congress fixed some of the original problems with the PPP program, extending the amount of time businesses had to use the money and lowering the percentage of the loan required to be spent on payroll.

Those were the signs the Reillys were waiting for. "The eight-week time frame just wasn't viable," Aileen says. "But the June 5 Flexibility Act from Congress — that's when we were really able to start looking at reopening."

Even now, they're still being cautious. Coperta reopened for takeout on June 24, offering food, wine and cocktails for dinner Tuesday through Saturday; plans call for on-premises dining to return in about two weeks. The restaurant has also received approval from the city to expand its outdoor seating, so once the dining room is open, there will be extra tables spilling out onto parking spots on East 20th Avenue, and a couple of spots on the Logan Street side will be reserved for curbside pick-up. "We've been watching how [COVID] cases are going," Aileen notes, "and they seem to be moving in the right direction. Overall, we just said we've got to get this done."

Beast + Bottle will take a little longer, because the owners didn't want to struggle with two reopenings at once, and because that restaurant's smaller interior will require more planning in order to provide safe distancing for employees and guests. 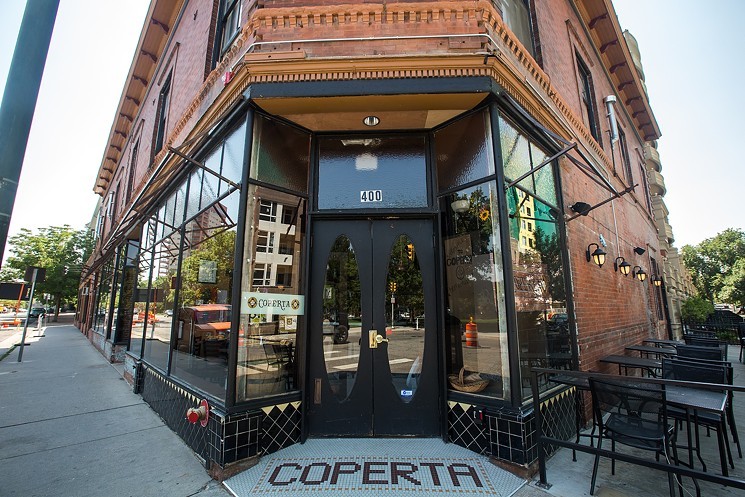 Coperta's pasta and other dishes are now available for takeout.
Danielle Lirette
Aileen says that hospitality will be more important than ever once both restaurants are open, because masks, partitions and limited visits to each table will make it tough to connect with customers. "One of the things we're going to focus on is the genuine care," she explains. "There are going to be a few things we'll have to change: a new POS system, QR codes for menus, easier payment — and we're not going to be able to do as many 'touches.'" 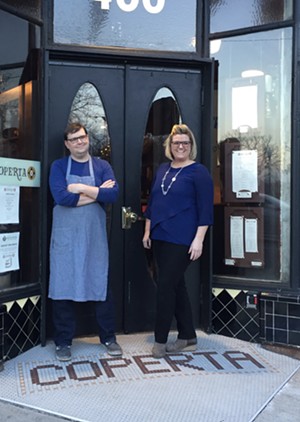 Paul C. Reilly and Aileen V. Reilly, unmasked — at least before customers arrive.
Courtesy of Coperta
They've already designated a "sanitization captain" at Coperta who will be responsible for ensuring cleanliness and safety at the restaurant once the dining room reopens, and other staffers will be available to help guests through dinner, even if they won't be stopping at each table as frequently as before the pandemic.

In the meantime, Paul is continuing the Saturday morning farmers' market with Ollin Farms, one of the producers he's worked with for years. He'll keep the market going through the end of the growing season, even after Beast + Bottle reopens, because his relationship with Colorado farmers and ranchers is the foundation on which he built his restaurant and its farm-driven menu.

Those relationships "went from strong to stronger" during the shutdown period, he says, noting that he even went into the fields in the spring to help with planting where needed.

"I worried that their sales would suffer with restaurants closing, but they're doing okay," he adds. "The fields are producing more and more, and now the question is, will there be enough demand in the fall? But they've 'pivoted,' too, and have found new ways to get produce to market."

There's no question that there will be demand for Beast + Bottle and Coperta in the fall; Paul, Aileen and Taylor have run two of Denver's best restaurants since they opened the former in 2013 and the latter three years later. Their patience and measured approach have served them well, even in a time of panic.

Coperta, at 400 East 20th Avenue, is open for takeout from 4 to 8 p.m. Tuesday through Saturday; visit copertadenver.com or call 720-749-4666 for menus and ordering. Beast + Bottle's farm stand is open for pre-ordered pick-ups from 10 a.m. to noon every Saturday at 719 East 17th Avenue. Visit beastandbottle.com to see prices and to order.
KEEP WESTWORD FREE... Since we started Westword, it has been defined as the free, independent voice of Denver, and we'd like to keep it that way. With local media under siege, it's more important than ever for us to rally support behind funding our local journalism. You can help by participating in our "I Support" program, allowing us to keep offering readers access to our incisive coverage of local news, food and culture with no paywalls.
Make a one-time donation today for as little as $1.