Curtis Park Deli's new location on East Sixth Avenue. Lauren Monitz
Currently a sandwich mainstay for Five Points residents, Curtis Park Delicatessen is digging the number six. In celebration of its sixth anniversary coming up this week, the deli is excited to announce its second location, which will open this year at 2700 East Sixth Avenue. The Cherry Creek North space that owner Michael Reif will take over was most recently the Dragon Cafe, which closed at the end of 2016. The second outpost will have a menu similar to that of the Curtis Park original, but with the addition of a few neighborhood touches, a parking lot and an expanded outdoor seating area. 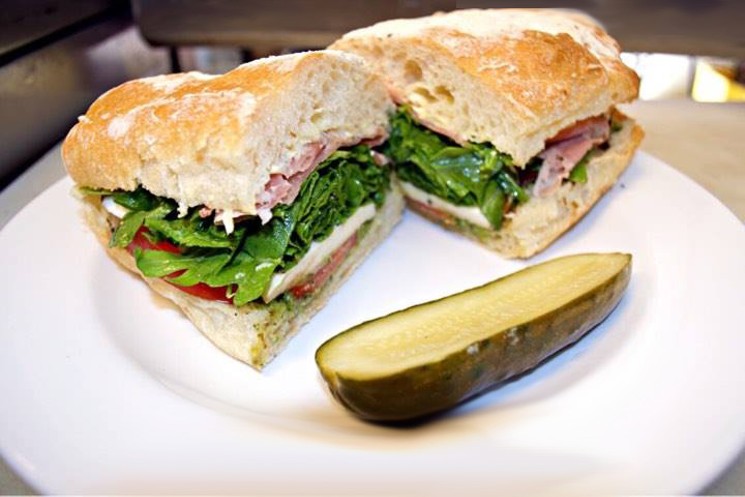 Another Curtis Park Deli will offer more of this.
Michael Reif
Since opening in 2011, the deli has changed up its team a bit. Original co-owner Joseph Walker has since moved back to New Zealand, and the RiNo location is now fully owned and operated by local Reif; partner Dash Harrison will join him at the new shop. An Oklahoma native, Harrison worked in restaurant management before turning to a marketing career when he moved to Denver. “I’m excited to transition back into the food industry, especially with a brand that’s already successful and has such a loyal following in Denver,” Harrison says of the endeavor.

Reif and Harrison chose the Sixth Avenue location because it’s a good distance from the original spot, yet still in a high-traffic district with plenty of neighbors but not many grab-and-go sandwich options. “It’s perfect, because it’s walking and biking distance for the Cherry Creek crowd,” says Reif. The two anticipate opening the second Curtis Park Deli sometime in late fall, since the building will require a fair amount of remodeling. In the meantime, fans can still get their favorites at the original eatery, only four blocks from Curtis Park itself.