This country ham has been aging at Il Porcellino for 27 months. Mark Antonation
Bill Miner has been patient. When he opened Il Porcellino Salumi at 4334 West 41st Avenue over two years ago, his first dry-cured products still needed weeks before they'd be ready, so the shop sold other styles of sausage until the slow-aged pork products were properly cured. Since then, the variety of styles on offer has increased, and Il Porcellino barely manages to keep the deli case stocked (especially during the holiday season, when demand for party platters and gifts cleans out the aging room).

But one piece of meat still hangs as testament to the owner's patience: a whole pork leg that has been curing for 27 months — as long as the store has been open. Now, after that long wait, Miner is nearly ready to slice into the prized country ham, and he's also ready to expand Il Porcellino beyond the tiny Berkeley butcher shop that has gained both local and national attention. 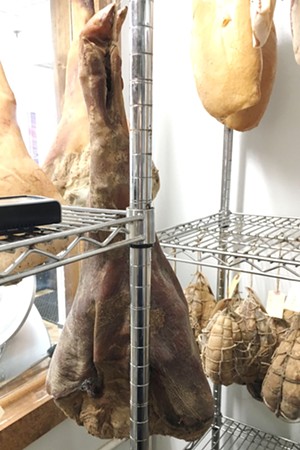 This country ham has been aging at Il Porcellino for 27 months.
Mark Antonation
For the past, year, Miner has been searching for a good location for a wholesale production facility...and he's finally found one. Last fall, Wendy Mitchell ended production of meats and cheeses at her Avalanche Cheese Company in Basalt (choosing instead to focus on her restaurant and cocktail bar), leaving a USDA-approved processing plant vacant. While Miner had been looking in Denver, the vacancy proved too tempting to pass up, so he's taking over the space and the USDA license and hopes to begin producing dry-cured sausage there by the end of February. He's hired Avalanche's former butcher to handle production, and he'll make regular visits to Basalt for three months or so to make sure his recipes and procedures are in place.

Wholesale production will give Il Porcellino the ability to sell to restaurants and markets, so we'll soon be seeing the brand outside of the Berkeley store. That's great news for fans of artisan salumi made using pork and beef from Colorado farmers and ranchers. But there will also be changes on West 41st Avenue that will keep regulars coming in the doors. Miner is adding a butcher counter inside the deli so that he can sell steaks, chops and other cuts of pork, beef, lamb and chicken — all sourced locally from such small operations as Corner Post Meats near Colorado Springs. He's also introduced a new deli menu of sandwiches, soups and sides, including a pastrami sandwich made with meltingly tender grass-fed bottom round (instead of the traditional beef brisket).

"I can’t do what I do without my awesome team — my director of operations, Bryan Languell, my head butcher and salumiere Forbes Rigsby," Miner notes. "And my new USDA wholesale production manager, Patrick Kennedy, is going to absolutely crush for Il Porcellino."

Il Porcellino isn't the only sausage game in town. Justin Brunson, founder of Old Major, Masterpiece Delicatessen and Culture Meat & Cheese (inside the Denver Central Market), began construction on a wholesale facility in northeast Denver this month; he says he'll be ready to begin production there in June. While the chef will shift production of artisan Italian salumi from Old Major to the new plant, that's only a small part of the overall goal. Red Bear American Charcuterie (the moniker comes from Brunson's nickname during his younger days in Iowa) will also make deli meats like roast beef, turkey, pastrami, corned beef and fresh sausages (both raw and heat-and-serve).

The chef points out that while large cities such as Chicago have dozens of deli-meat purveyors, Denver is lacking in high-quality producers. "We're going to make a clean line of grass-fed beef hot dogs," Brunson explains, adding that while he hopes to take Red Bear to a national audience, he also wants to attract everyday shoppers at Denver grocery stores by offering a locally made product outside of specialty markets.

Denver salumi has been earning national attention of late. Last year Il Porcellino was a Good Food Awards winner for its coppa and smoked head cheese in the charcuterie division (which honored only fourteen other companies across the country). This year, Denver's Elevation Charcuterie and Artisan Meats took home the same award for its Calabrese sausage. "Winning the Good Food Award was an amazing and humbling experience," says Elevation co-owner Chad Nelan. "It was great to be able to meet all the other amazing producers and be a part of it."

Nelan opened Elevation with partner Alex Windes in 2016; he says the company has barely been able to keep up with demand over the past year and a half. This year, Nelan and Windes are hiring more staff to ramp up production from between 1,200 and 1,600 pounds of salami a week to more than 4,000, and they're also getting ready to launch their pancetta and guanciale, Elevation's first whole-muscle cured meats.

The sausage business may be a grind, but these producers have the cure for Denver's salumi craving.