Beyond Chicken: Restaurants and Chefs Get Creative With Collaborations 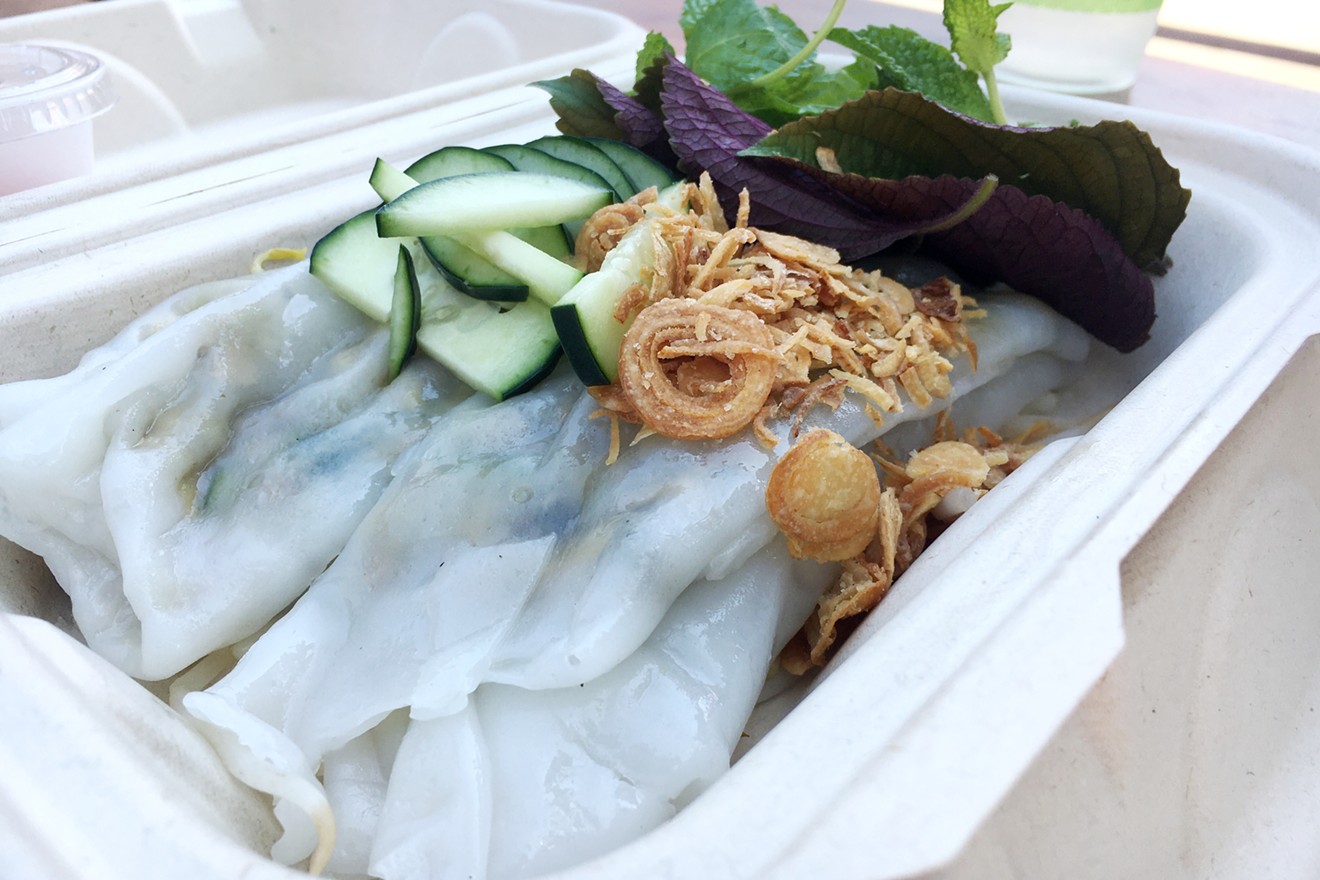 Miss B's Vietnamese recently served these banh cuon at Ace Eat Serve. Mark Antonation
It's not all fried chicken out there. Sure, chefs are turning to comfort food to draw in more customers during the pandemic; food like fried chicken, pizza and burgers sell well, travel easily and keep food costs down. But there's been an unexpected up-side to the otherwise overwhelmingly depressing economic disaster caused by five months of restricted business — and that's creativity.

Many chefs found themselves out of work when COVID-19 hit Colorado, and others discovered that their pre-COVID customer base just wasn't there. Food trucks faltered, catering jobs crumbled, large social gatherings screeched to a halt. But those in the restaurant industry are a resilient and resourceful bunch, since working long hours for low pay and operating on tight margins tends to attract stubborn, die-hard rebels who only work harder when times are tough.

At Ace Eat Serve (501 East 17th Avenue), ping-pong has been off the table since mid-March, when bar and restaurant games were curtailed at the same time as in-house dining was canceled. Even after dining rooms were allowed to reopen at 50 percent capacity in late May, billiards and other attractions (though not, oddly, casino slot machines) remained verboten. Some concessions have since been made to allow single pool tables, but Ace owner Josh Wolkon has yet to get the go-ahead for table tennis.

So instead, he and executive chef Thach Tran have found other ways to add a little extra revenue and draw customers. Tran's doing poke and sushi for lunch with his Happy Go Lucky pop-up, and he's also added soup dumplings, once an occasional special, to the nightly dinner menu. He only makes about fifteen orders a night — they're very labor-intensive, Tran says — and so far they've been selling out. Traditional Chinese soup dumplings, or xiaolongbao, are typically filled with pork and rich broth, but Tran has been experimenting with other fillings, such as green chile and, recently, a pho soup dumpling loaded with ribeye. Also on the menu: frozen wontons, bao, pot stickers and udon noodles that customers can pick up and heat up at home. 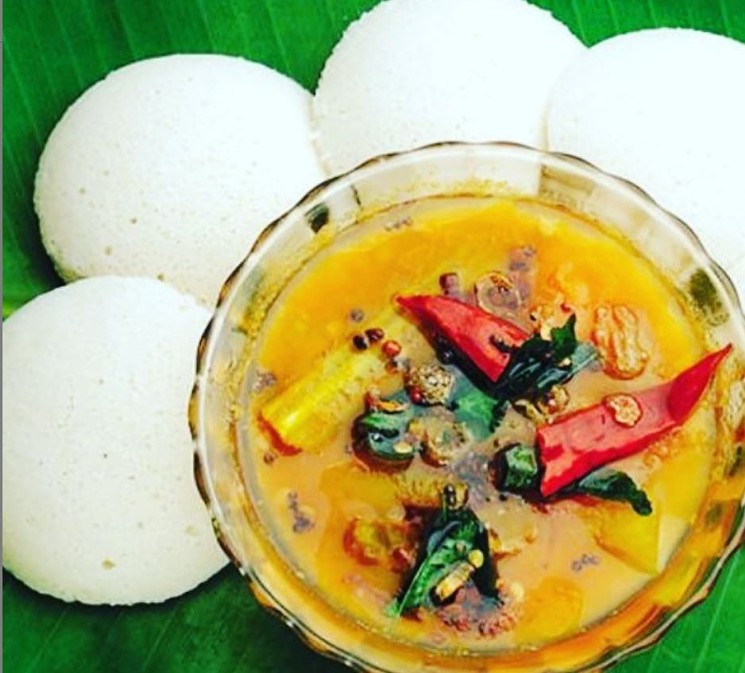 Tessa Deli served Indian idli sambar at a recent pop-up dinner.
Courtesy of Tessa Delicatessen
Wolkon and Tran are also helping out Denver food-truck owners by hosting weekly patio pop-ups for lunch outside Ace. First up was Yuan Wonton, and last week was Miss B's Vietnamese. Tran met Kim Bui, the chef/owner of Miss B's, when she was getting ready to launch her food truck last year, and the two bonded over childhood memories of their moms' cooking, he says.

Bui recently added one of those childhood dishes to her food truck's menu: banh cuon, a steamed rice roll similar to a crepe, only made with rice flour. It's a tricky dish to pull off, even in a restaurant kitchen, because the thin batter is poured onto a piece of cloth stretched over a pot of boiling water. The result is a delicate translucent sheet that's topped with minced pork and mushrooms (or other fillings), rolled and served with fresh herbs and crispy-fried shallots. It's not the kind of dish you'd normally find at a food truck, but Bui has been introducing a wider range of Vietnamese dishes in order to share her favorites and give customers something new to try.

Bar Dough has also hosted the occasional food truck during dinner hours on its expanded patio that wraps around the side of the restaurant at 2227 West 32nd Avenue. If guests purchase dinner from the food truck and cocktails or wine from the restaurant, it's a win for everyone.

At Tessa Delicatessen, 5724 East Colfax Avenue, home-style Indian cuisine has been popping up on Saturday nights. Chef/owner Vince Howard doesn't need to team up with a food truck, though, since his sous chef, Harshita Birdi, grew up in India and has been sharing her family's recipes for the pop-ups. Idli sambar is tough to find in Denver, but the rice-and-lentil cakes doused in spicy sauce are among the dishes Birdi has recently created. Howard says the dinners have been a big hit with his customers, so he's planning to continue them on a regular basis.

Indian flavors and dishes have also been sneaking onto the menu at the otherwise Italian Spuntino at 2639 West 32nd Avenue, thanks to chef/co-owner Cindhura Reddy. She's also been offering complete South Indian takeout dinners on Sunday evenings, with dishes such as methi chicken, eggplant curry and chana masala. The dinners have been so popular that Spuntino generally sells out on the restaurant's online pre-order form.

The pandemic has taken its toll on Denver restaurants, but it has also brought industry workers together to create new ways of doing business, offer unique dining experiences and rise to the challenge. Comfort food has been on the rise, but so are creative pop-ups, chef's dinners, mobile kitchens and secret menus.
KEEP WESTWORD FREE... Since we started Westword, it has been defined as the free, independent voice of Denver, and we'd like to keep it that way. With local media under siege, it's more important than ever for us to rally support behind funding our local journalism. You can help by participating in our "I Support" program, allowing us to keep offering readers access to our incisive coverage of local news, food and culture with no paywalls.
Make a one-time donation today for as little as $1.