Are Proof of Vaccine Requirements Coming to Denver Restaurants?

Annette chef/owner Caroline Glover announced a return to requiring masks on August 4. Annette/Facebook
The Delta variant is spreading, even among fully inoculated people, and as it spreads, so do restrictions at restaurants. Some are requiring masks, others vaccinations.

Cafe Aion in Boulder made headlines this past weekend when chef/owner Dakota Soifer announced that he would be implementing a vaccine requirement for anyone dining indoors in the near future. Back in April, Bar Max, at 2412 East Colfax Avenue, became the first eatery in the state to adopt a proof of vaccine when it reopened for indoor dining.

That decision led to a major backlash — not only from locals, but also on a national scale, with an attack of one-star reviews left on Yelp and Google from people who didn't live anywhere near Colorado. "I had to pay someone to flag those reviews," explains Bar Max owner Marshall Smith — an additional burden on top of so many others he'd already shouldered as a small-business owner, including an 80 percent reduction in sales in 2020 because of the forced shutdowns.

A week after Denver hit the 70 percent vaccination rate in early July, Bar Max stopped requiring proof of inoculation, but with COVID cases increasing, Smith implemented the requirement again on July 31. "We just generally want to be a responsible force in the community and encourage vaccinations," he says. "It's never been a political issue; it still isn't a political issue. It's about trying to get us back to normal."

This spring, To the Wind Bistro at 3333 East Colfax Avenue decided to support its clientele in a different way: by requiring proof of vaccine on Wednesdays. "Having some customers that are on the older side and vaccinated, it started with them asking some questions and then us deciding, once we were fully vaccinated, to do one night to give them some comfort," recalls owner Royce Oliveira. The move has proved to be a positive one. "Wednesdays are one of our busiest nights," he notes.

Caroline Glover, chef/owner of Annette at Stanley Marketplace, has been vocal on social media about the challenges restaurant owners have faced throughout the pandemic, including the current uncertainty. "Last week I think I was like, 'Since we're all vaccinated, we're great. No big deal,'" she explains. "Now we're not even sure if the vaccine is working against the Delta variant. There's not enough information, and I don't feel as safe."

On August 4, after waking up at 4 a.m. to read through the latest information, Glover made the decision to bring back a mask requirement for staff and guests, who now must wear face coverings when not eating or drinking. The possibility of going back to all-outdoor dining is on her mind, too. "I'm very happy we didn't throw the greenhouses away yet," Glover says of the structures that helped get Annette through the colder months of the pandemic.

Glover hopes that the state and local governments step up to support restaurant owners by requiring proof of vaccine for diners. "I think putting this on business owners again, us being the police...it's just not right," she explains. "If there's a mandate, it's less of us having to tell people what to do to keep ourselves safe. People are angry. ... They don't want to be told to wear masks, they don't want to be told to be vaccinated, and it just feels a little bit scary to be the person saying it without anybody backing us up." 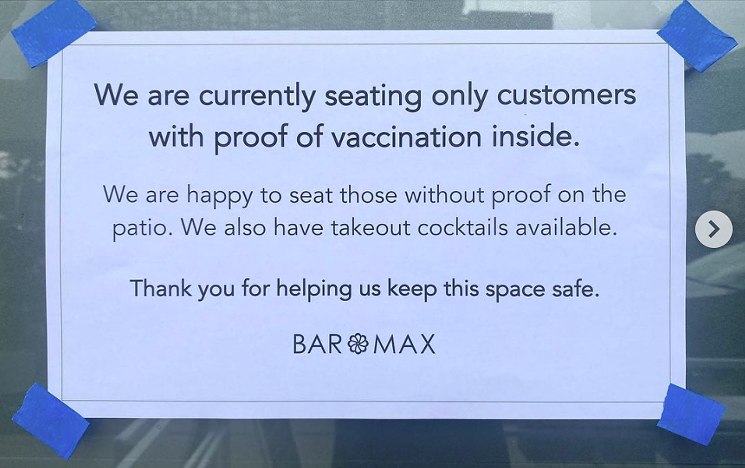 A sign at Bar Max notes its vaccination policy.
Bar Max/Instagram
Smith agrees. "We folks who have already been dealing with the decline of sales and income and have worked in the service industry throughout the COVID pandemic should not also have the burden of policing this," he explains. "It should be done by the powers-that-be, government. A basic function of government is to provide safe and healthy conditions for society."

A survey sent out by EatDenver, the local nonprofit association for independently owned restaurants with over 400 members, reflects that same feeling regarding proof of vaccination requirements. "The majority sentiment that we got from this survey," explains Katie Lazor, executive director of EatDenver, "is that, if this step is necessary in the grand scheme of curbing the pandemic and getting through it, it's going to take the government to back it in order for restaurants to feel comfortable adding it to their operations."

Restaurant owners and operators are already exhausted, as well as short-staffed. "The vaccine conversation is even more convoluted and emotional than the mask-wearing mandate," Lazor continues. "Judging by how that went last year, and the backlash on front-line workers who were really tasked with enforcing the mask mandate, the majority of restaurants and bars aren't going to do this voluntarily."

Still, Smith wishes some would. "I would be thrilled to see more people join this effort," he says.

But as Lazor notes, "It's so much easier when everyone is doing it or no one is doing it. ... To put your staff in the position of defending that decision is really difficult."

And as Glover's early-morning research session illustrates, "No one really has time to do this research and become an expert on how to navigate the pandemic while they're also running a small restaurant," Lazor adds. "So a lot of restaurants are really relying on what the government guidance and what the mandates are to be able to do the right thing and help get us through that."

One upside: Lazor doesn't see another total indoor dining shutdown on the horizon yet, as that decision was tied to hospitals reaching capacity, something that Colorado is not yet facing in the fight against the Delta variant.

With the situation rapidly evolving on a global scale, though, it's hard to predict exactly what the future holds. In the meantime, Smith says, "We would like to get back to normal as much as we can, where we provide a comfortable, safe, healthy oasis, away from the stress and anxiety and trauma of the past year, and seating only vaccinated customers is our best way to do that."
KEEP WESTWORD FREE... Since we started Westword, it has been defined as the free, independent voice of Denver, and we'd like to keep it that way. With local media under siege, it's more important than ever for us to rally support behind funding our local journalism. You can help by participating in our "I Support" program, allowing us to keep offering readers access to our incisive coverage of local news, food and culture with no paywalls.
Make a one-time donation today for as little as $1.