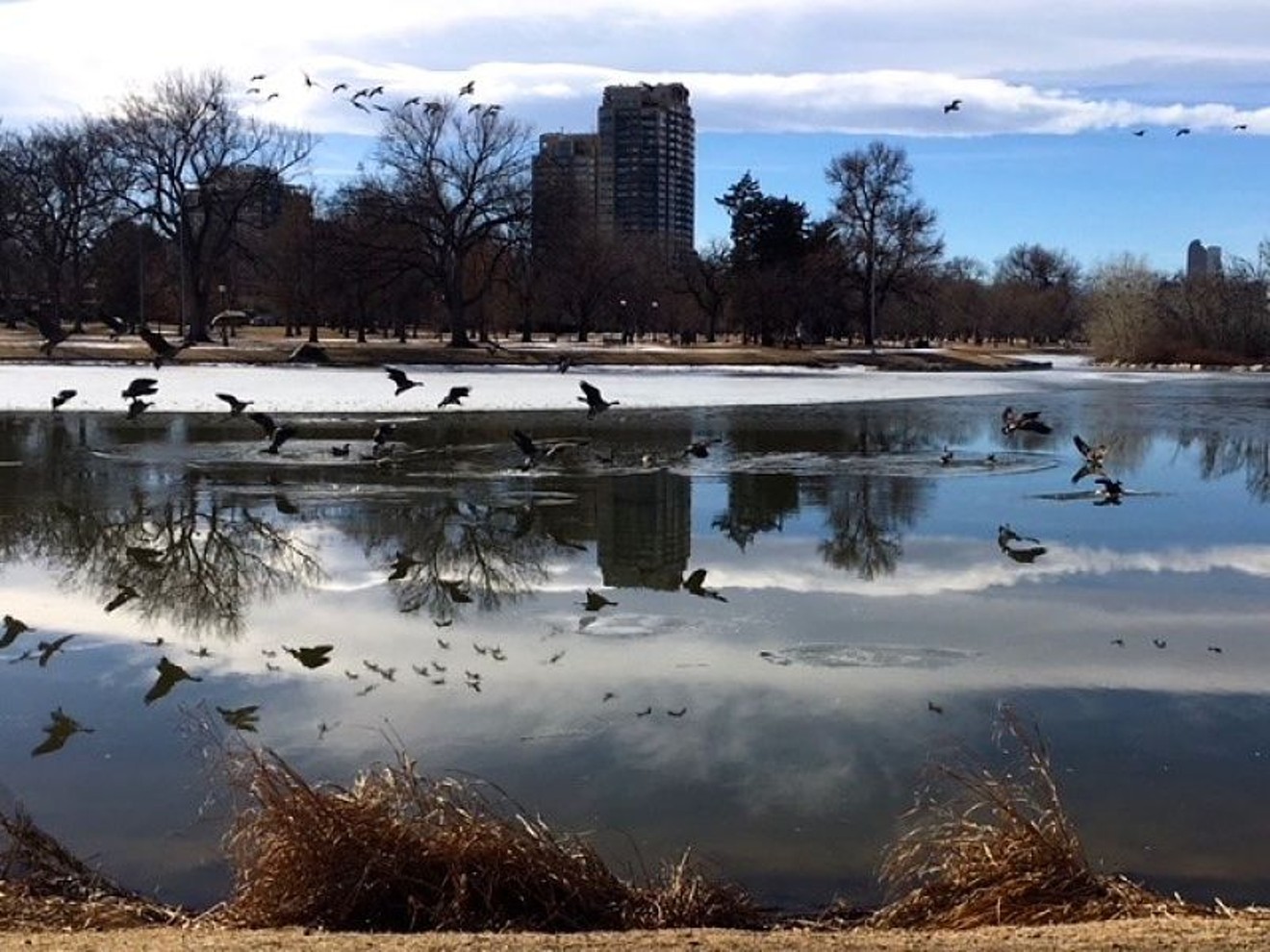 Geese in City Park could be among those culled in Denver's new population control program. Joe Weeg
There's been quite a flap in Denver since news broke in late June that Denver Parks and Recreation, with the help of the United States Department of Agriculture, is culling Canada geese from city parks and donating the meat to hungry families. On July 6, animal lovers gathered in Washington Park to protest the program, while people continue to debate ethical and health questions on social media.

For years, a similar program in New York has distributed goose meat to the needy through food banks. The geese are removed from near that city's airports, in a safety measure introduced in the wake of Captain Chesley Burnett "Sully" Sullenberger's emergency landing on the Hudson River after his plane's unfortunate encounter with a goose a decade ago.

How will Denver's geese reach families in need? Details are sparse, and the city has declined to name the processors that will handle the killing of the geese and the packing of the meat, for fear of retribution. Indeed, Denver Parks deputy executive director Scott Gilmore has reported receiving threatening voicemail and email messages.

While critics worry that the goose meat is dirty or unwholesome, the USDA has cleared the geese for human consumption (and supporters of the plan are quick to point to all that unhealthy goose poop previously cluttering Denver's parks, sidewalks and shoe soles). In late February, Colorado Parks and Wildlife issued a statement revealing that several ducks and geese in the metro area had died from a bacterial infection known as New Duck Disease, but that condition apparently is only contagious among birds.

Still, culinary experts have some concerns. "I would be a little skeptical of the quality considering the amount of pesticides used on golf courses and parks," says Michael Scott, a faculty member at the Auguste Escoffier School of Culinary Arts in Boulder, adding that "grass is really not a natural plant source and can't be very good as their main diet." But the geese seem satisfied, and since grass is abundant in Denver parks year-round, they don't need to migrate to find a new food source.

Even so, goose meat "can't be much worse than the conventional chicken mass-produced to supply our needs," Scott acknowledges. And "wild goose has been a culinary specialty for centuries," he adds. "Goose was the traditional Christmas meal before turkey."

Wild or not, goose meat is much closer to duck than it is to chicken. The meat is red and rich like duck, with a slightly stronger flavor. Any preparation that works for a duck will generally work for a goose. Both are easy to overcook, which can make the meat very tough.

Goose leg has long been used for making confit (a general term for meat that has been lightly poached and then preserved in its own fat), which can produce a richer finished product than its duck counterpart. Goose liver can be prepared much like foie gras, without the inhumane practices often associated with the cultivation of ducks for the classic pâté. Every part of the goose, from the rich breast to the organ meat to the bones (simmered for stock), can be used, which means that a resourceful cook can get multiple meals from a single goose. 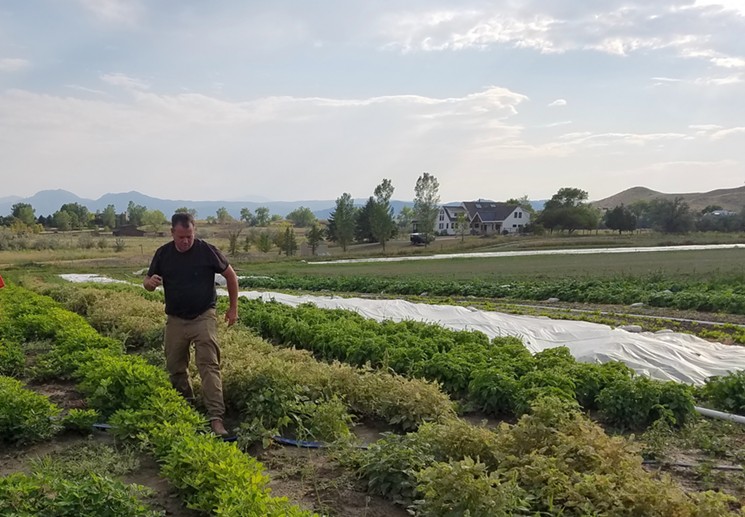 Eric Skokan on his farm in Niwot.
Linnea Covington
Eric Skokan, chef/owner of Black Cat and Bramble and Hare in Boulder, as well as the 425-acre Black Cat Farm, is a fan of Denver's program. "I think it's great: It's a classic win-win we should encourage," he says. "One of my goals in starting the restaurant is to find out what 'Colorado' cuisine should be. Part of that is serving foods that are native to Colorado."

It helps that Skokan is a fan of goose meat in general. "If one expects all meat to taste like chicken — i.e., flavorless — then this is not that," he says. Skokan also isn't concerned about the human impact on diets of the urban-dwelling birds. "Geese aren't interested in trash, like pigs or goats might be," he notes.

Goose is not a particularly common item on Denver menus; it's usually confined to restaurants with a specific focus on game. "Wild goose is not sold in the grocery store wrapped in plastic like a burger," says Skokan. "If it were prominent, it would be widely eaten. But it won't be prominent until it is widely eaten."

And if history wins out, someday it will be, Skokan says, pointing to a parallel situation: "A famous historical example is homeless and poor Bostonians during colonial times being denigrated for eating lobster out of the bay."

Update: In response to our query, we received this response from Cynthia Karvaski at Denver Parks and Recreation: "As part of our agreement with USDA, once geese are captured alive, they can be donated to a private organization that is also permitted to receive the geese, and will be allowed to utilize the meat. The Depredation Permit states: 'Migratory birds legally taken under this permit (meaning the Depredation permit) may be donated to a charitable organization.' So, the permit isn’t giving the city permission, the permit is giving USDA, the permit holder, authorization to donate."
KEEP WESTWORD FREE... Since we started Westword, it has been defined as the free, independent voice of Denver, and we'd like to keep it that way. With local media under siege, it's more important than ever for us to rally support behind funding our local journalism. You can help by participating in our "I Support" program, allowing us to keep offering readers access to our incisive coverage of local news, food and culture with no paywalls.
Make a one-time donation today for as little as $1.
Brian Flynn is a writer, baker, comedian and podcaster from Denver.
Contact: Brian Flynn
Follow:
Twitter: @apparentlybrian
Instagram: @apparentlybrian/