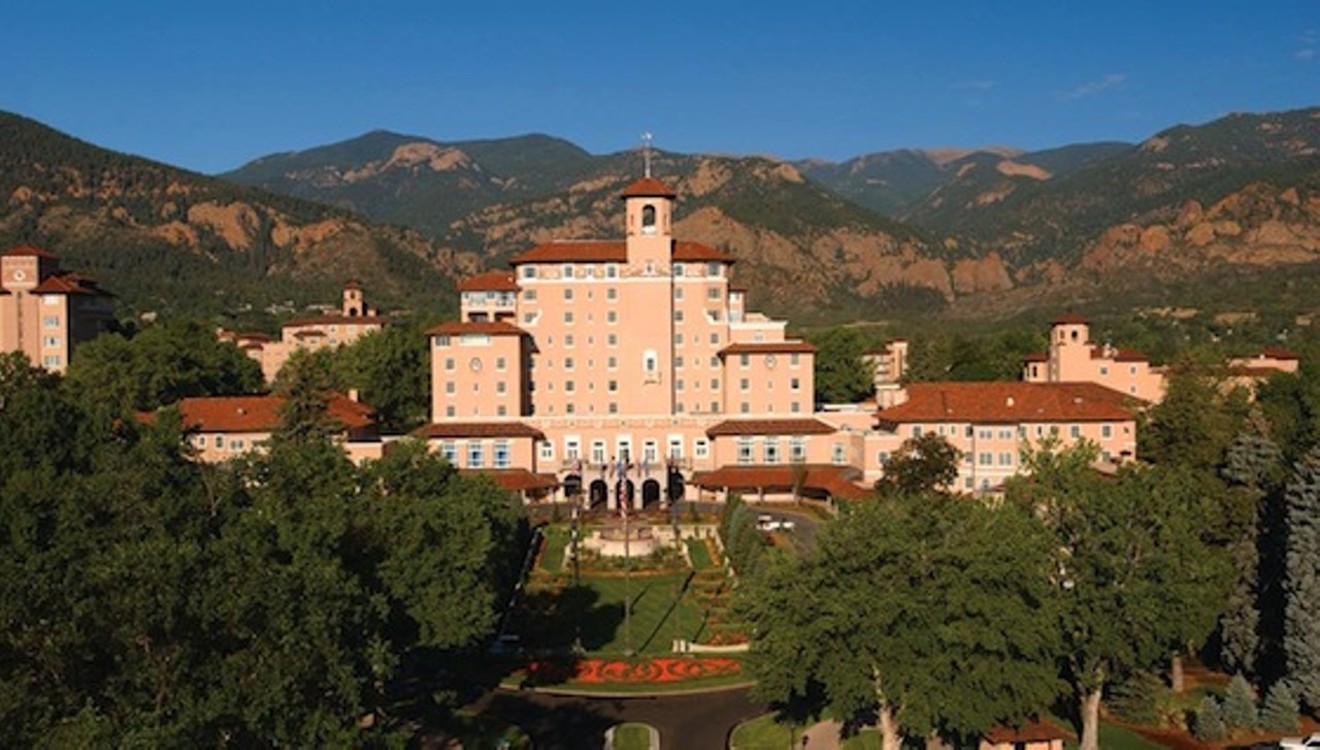 The Broadmoor said goodbye to longtime Maître d' Duane Thompson, who retired this week after 39 years. The Broadmoor
Duane Thompson can survey a dining room and note every butter dish out of place, every misaligned chair, every improperly folded napkin in an instant, even while engaging you in a conversation where you'd swear you have his full attention. That's because Thompson is one of those rare individuals who can truly multi-task, talking intently with patrons while methodically checking off the minutiae of his job in the back of his mind. That skill comes from 39 years as a restaurant employee at the Broadmoor in Colorado Springs, where Thompson's retirement party took place last night, September 18.

The now-retired maître d'hotel began his career at the age of eighteen, as many college students do, with a job busing tables. "I started as a busboy, back when they still called them busboys," Thompson recalls. That was at the London Grill inside the Antlers Hotel, then managed by the Broadmoor. 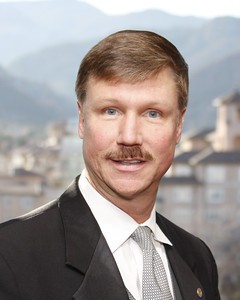 Duane Thompson built a career in hospitality.
Courtesy of Duane Thompson
The job was only intended to get him through school until he could earn a degree in data processing, as computer science was called back then. "But I decided I didn't want to talk to computers, I wanted to talk to people," Thompson says.  And so he kept the job and ditched the degree.

Within a month, he had moved up to server and was soon training other employees, but he had to wait until he was 21 to be promoted to captain/supervisor. After eleven years at the Antlers, another company took over the hotel and its restaurants, so Thompson moved to the Broadmoor itself, working as assistant maître d' at what was then called Charles Court (and is now Ristorante del Lago) and then moving on to become assistant maître d' and then manager at the Tavern. In 2001, he moved to the Penrose Room, where he stayed until just a few weeks after his 39th anniversary with the company.

Thompson was maître d' at the Penrose Room when it first earned five diamonds from AAA in 2007 and then five stars from Forbes in 2009. "They're looking for consistency, and they're looking for customer service that's natural and not robotic," Thompson says of the inspectors who hand out the stars and diamonds.

He believes it takes a certain kind of personality to excel in his field and to stick with it for as long as he did. "Some things you have to be instilled with or have a passion for — and one of these is attention to detail," he explains.

That attention to detail came from his parents, he notes, and the rest came from his genuine love of hotels, restaurants and people. It started in Illinois, when Thompson was a young boy and his father would take the family on business trips to Chicago. While his parents were off wining and dining, he would explore the hotel, sometimes getting into trouble when he was caught where he shouldn't have been. 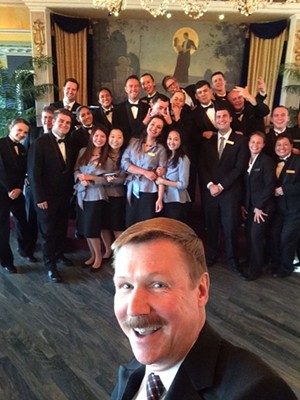 Duane Thompson with the Penrose Room staff at the Broadmoor.
Duane Thompson
That was back when people would dress their best for nearly every occasion, including going out to dinner. Even through the 1980s and ’90s, that level of formality persisted at the hotel he worked at for nearly forty years. "At one point, every restaurant at the Broadmoor required a coat and tie," he states. "The hostess [at the London Grill] wore a formal gown to seat you."

A small wardrobe of jackets and ties were kept on hand for guests and travelers caught without proper attire, and as the rest of society became more casual, Thompson added pants to the inventory, in case guests showed up in jeans or the airlines had lost their luggage. Earlier this year, the Penrose Room changed its policy to allow denim for the first time, at least when paired with a nice jacket. "It's unfortunate that we've had to de-formalize over the years," Thompson says, but he also acknowledges that being well-dressed is not a sign of class, distinction or manners.

"Clothes are not an indication of wealth, taste in food or passion and appreciation for dining," he notes. "It's a change of generations. The clientele are often the children and grandchildren of my original customers."

Those customers include celebrities and their families, such as the parents of a well-known actress who celebrated their seventieth wedding anniversary privately in the Broadmoor's Penrose suite rather than in the Penrose Room. But they missed the personalized service Thompson offered, and sent a note down to the restaurant saying how sorry they were that they couldn't share the celebration with him.

"My customers have become like family members," Thompson says. "Some have followed me from restaurant to restaurant and come in every Saturday night."

At 57, Thompson isn't yet ready to retire for good, but he's ready for something new. "I'm going to take six months off to recalibrate," he explains. "It's time for a change and for a new challenge."

While Thompson decides what that something new will be, the Broadmoor is in for something new, too, as times change and customers expect a different kind of hospitality — one that Thompson says is more about anticipating needs and offering unexpected services. He'll be on the receiving end of that now, and he's looking forward to being a guest at the restaurant he's helped run for nearly forty years.