Visit These Five Boozy Tasting Rooms With a Twist

Sample several styles of whiskey at Laws. Danielle Lirette
Denver is overflowing with tasting rooms and taprooms offering sips of, well, just about everything. Whether your passion is kombucha, beer, wine, cider or spirits, there’s a glass act to quench your thirst. Here are five of our favorite spots to tempt your liquid-loving tastebuds.

American Cultures Kombucha Taproom.
Chelsea Keeney
American Cultures
Kombucha Taproom
3233 Tejon Street
720-402-8394
americancultures.com
An entire taproom dedicated to kombucha? While much of the country is still squeamish about the fizzy, fermented and slightly sour tea, kombucha, often touted for its probiotics, antioxidants and disease-fighting, bacteria-killing powers, has earned its place in Denver, most notably at the American Cultures kombucha taproom. The LoHi space, flooded with sunlight and staged with fresh flowers, a chalkboard menu and wooden tables, is the brainchild of Noah and Danielle Brooks, who roamed the streets in a food truck pouring Happy Leaf Kombucha before setting their sights on a full-fledged tasting room dedicated to kombucha taps. While the Brookses don’t make their own kombucha, American Cultures spotlights high-performing local brands that do it right: Rowdy Mermaid, Happy Leaf, Cliffhouse, Upstart and TruBucha, to name a few. The best way to sample the flavors, which seesaw from ginger peach to coconut turmeric, is to order a flight of four. Find your muse and then buy a growler of it to take home.

Woods Boss Brewing Company.
Jonathan Shikes
Woods Boss Brewing Company
2210 California Street
720-642-7177
woodsbossbrewing.com
In a city that bleeds beer and boasts nearly eighty breweries, the competition for tasting-room supremacy is frothing over. There are numerous contenders that rise to the top — Intrepid Sojourner Beer Project, the Grateful Gnome, Epic Brewing Company, Spangalang Brewery and Denver Beer Co. among them — but the taproom at Woods Boss Brewing Company, which opened last year in Five Points, screams beervana on every level. The stellar beers, which zigzag from fruity kettle sours and straw-colored saisons to smooth porters and crisp Belgian blonde ales, are worth the impending hangover, and the beauty of the tasting room urges you to stay for another round. This is the kind of place where you want to plop down and stay until you’re forcibly ambushed to the asphalt. The roomy quarters, flanked by a centerpiece bar constructed from redwood logs, is offset by a showpiece community table that doubles as a platform for playing board games, exposed red brick, lounge sofas that make you want to curl up with a good book, and garage doors that open to a patio with communal seating. When it comes to taprooms, this one is boss.

Bigsby’s Folly Craft Winery.
Mark Antonation
Bigsby’s Folly Craft Winery
3563 Wazee Street
720-485-3158
bigsbysfolly.com
Colorado’s wine regions are a trek from the urban sprawl of Denver, but while the vines don’t grow close to the city, that doesn’t preclude grape gurus from exploring wines in tasting rooms close to home. In RiNo, Bigsby’s Folly Craft Winery sits in a red-brick building that in a prior life was home to a factory. Last year, owners Marla and Chad Yetka transformed the sprawling site — named after their golden retriever, who has since passed — into a winery, restaurant and tasting room that pours whites, reds and rosés from Oregon, California and Colorado. The lovely space — a mix of industrial-modern aesthetics, Napa Valley rusticity and refined vintage opulence — is illuminated by rather magnificent chandeliers that hang from beamed rafters and cast an ambient glow on the weathered brick walls. Sip a wine flight (best paired with a meat-and-cheese board) at the convivial bar, linger on the patio while watching the sunset drift behind the peaks, and buy a growler of tap wine or a bottle or two of the Bigsby’s Folly-labeled rosé of grenache to uncork at home. 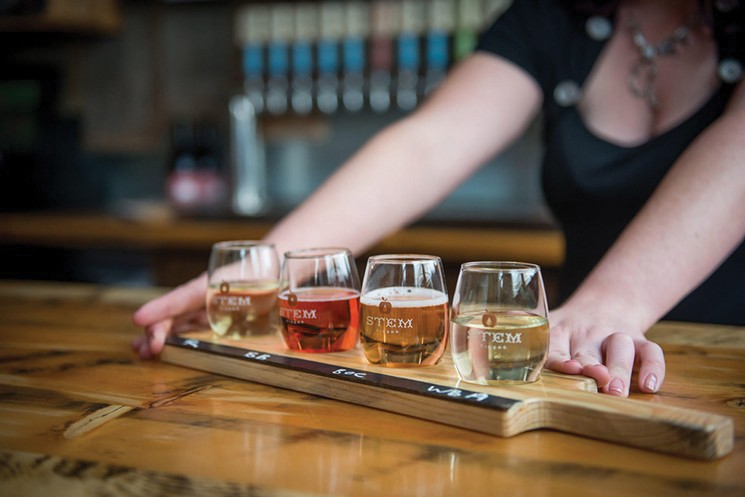 Stem Ciders RiNo taproom.
Courtesy of Stem Ciders
Stem Ciders RiNo Taproom
2811 Walnut Street
720-443-3007
stemciders.com
Craft-beer fans waltzing through Denver in pursuit of elusive ales, IPAs and sours often find themselves sidetracked by the city’s cideries, including Stem Ciders, which started out in 2013 as a small production facility in Lafayette. The RiNo tasting room debuted in 2014 and has since become a go-to destination for those who eschew sweet for dry, crisp and refreshing ciders that are simultaneously approachable and ambitious. Try the hibiscus session apple cider infused with hibiscus tea; the salted cucumber apple cider, a seasonal collaboration of Stem and the Real Dill that’s dry-hopped and crafted with pressed apples from the Pacific Northwest; or the Colorado Heritage Blend, a hard apple cider blended with local Winesap and Dabinett apples. If you want to sip funky cider blends, pop by the tasting room on the first Monday of each month for Firkin Monday. That’s when the cider wizards release experimental small-batch ciders with edgy flavor profiles that might involve fresh herbs, chocolate or ancho chiles.

Laws Whiskey House.
Danielle Lirette
Laws Whiskey House
1420 South Acoma Street
720-570-1420
lawswhiskeyhouse.com
Named after founder Alan Laws, this distillery, tasting room and temple to whiskey crafted from local grains and aged a minimum of two years has generated widespread accolades for its flagship Four Grain Straight Bourbon and Secale Straight Rye. Along with its limited-edition seasonal releases, including Triticum Straight Wheat, these spirits have positioned Laws at the forefront of Colorado’s unofficial whiskey trail, and while the whiskeys are sold at bottle shops all across the state, distillery tours offer in-depth exploration of the whiskey-making process and instant camaraderie with like-minded aficionados who feel like they’ve just stumbled into a gold mine of barrels and stills. Bottles are available for sale in the snug tasting room, which also offers flights. Still, the best way to choose your vice is to show up on Thursday between 5 and 9 p.m. for Whiskey Flight Night, a tasting-room-only soirée that gives imbibers the opportunity to sample half-ounce pours of three different whiskeys for $10. Bonus: If you’re purchasing a bottle as a gift, the staff will happily engrave it. The logoed flasks are cool, too.
KEEP WESTWORD FREE... Since we started Westword, it has been defined as the free, independent voice of Denver, and we'd like to keep it that way. With local media under siege, it's more important than ever for us to rally support behind funding our local journalism. You can help by participating in our "I Support" program, allowing us to keep offering readers access to our incisive coverage of local news, food and culture with no paywalls.
Make a one-time donation today for as little as $1.
Lori Midson
Contact: Lori Midson