FlyteCo Brewing Will take over Punch Bowl Social's former space in the old Stapleton control tower. Amber Boutwell
Things are taking off at FlyteCo Brewing, which announced on December 7 that it will take over the high-profile, 17,000-square-foot restaurant space inside the renovated 164-foot tall control tower building at the former Stapleton International Airport in the Central Park neighborhood. The landmark tower at 3120 Uinta Street was formerly home to Punch Bowl Social, which closed in June 2020 after three years.

The aviation-themed brewery, founded in early 2019 at 4499 West 38th Avenue, will use the spot as a second taproom, with a small-batch brewing system and a restaurant with a cocktail and wine menu. It is expected to open in the summer of 2022. The owners also say they plan to keep many of the "game-focused elements installed by its predecessor, Punch Bowl Social, including bowling alleys, karaoke rooms, mini-golf and more."

"We've driven by that building in the past and thought, 'Wow, that would be amazing some day,' and now it's coming true," says FlyteCo co-owner and head brewer Jason Slingsby. "It's perfect for us."

“The decision to pursue and open our second location was very much expedited when this property became available, but it’s a once-in-a-lifetime opportunity that we couldn’t be more thrilled about,” adds FlyteCo co-owner Morgan O’Sullivan in a statement. “Right now, we’re focused on becoming good stewards of the neighborhood, where nearby families will feel welcomed at our all-day destination.” 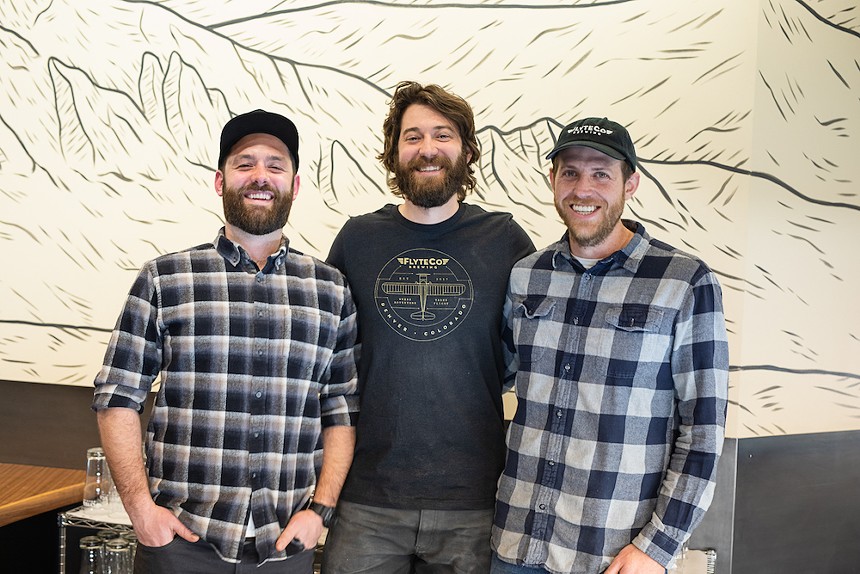 FlyteCo Brewing's owners.
FlyteCo Brewing
Two of FlyteCo's owners are pilots themselves, and the existing brewery's decor includes a salvaged plane wing and a full-sized replication of a Boeing 737 fuselage inside of which people can sit. The brewery donates 10 percent of its profits to aviation-related causes. Its original building on 38th Avenue is also historic; it's an 1800s-era electric plant that was used for west Denver's streetcar system.

FlyteCo operates a sandwich and coffee shop inside its existing brewery and plans to convert its license to a brewpub license. Its fifteen-barrel brewing system will supply beer for both locations, though it will need to buy new fermenters to keep pace. The new spot will have its own small system.

"It's a significant jump for us," Slingsby acknowledges. "But we're working right now to secure a strong team and to find the right people to help us build this. We'll bring on a general manager and an executive chef, and we'll work with the neighborhood to learn what they want in terms of food.

"We want to build on the sort of all-day, family-oriented vibe that we already have," he continues, adding that people tend to use the brewery as a workspace with their laptops and coffee in the morning. After that, the customers tend toward the happy-hour crowd and then the late-night brewery or trivia fans.

The fuselage replica at FlyteCo is a good place for a flight.
FlyteCo Brewing
The control tower was in use at Stapleton International from 1929 until 1995, when Stapleton closed and was replaced by Denver International Airport. The historic structure remained as part of the Central Park neighborhood (formerly called Stapleton) over the past few decades.

In 2017, well-known local restaurateur Robert Thompson opened Punch Bowl Social in a building that was attached to the control tower (though not the tower itself). Punch Bowl operated several locations until the pandemic hit in early 2020. The company filed for bankruptcy protection in late 2020. Thompson resigned from Punch Bowl Social in August 2020 and recently opened his first project since leaving the "eatertainment" brand, Mediterranean restaurant Three Saints Revival.

In November, the Denver Post reported that the the tower building had been purchased for $8 million by an entity called Ctrl Tower LLC. That LLC is registered to a Vishan Rajkumar Patidar, the story said.

Slingsby says Patidar's real estate group had worked with FlyteCo in the past and that the company had the brewery in mind when it bought the building.

"There are a lot of wonderful things we are walking into, like a functional kitchen and well-set-up bars, and with the bones of the place being the control tower, its lends itself perfectly to our brand and theme. So we'll work with the history that's there," Slingsby adds.
KEEP WESTWORD FREE... Since we started Westword, it has been defined as the free, independent voice of Denver, and we'd like to keep it that way. With local media under siege, it's more important than ever for us to rally support behind funding our local journalism. You can help by participating in our "I Support" program, allowing us to keep offering readers access to our incisive coverage of local news, food and culture with no paywalls.
Make a one-time donation today for as little as $1.