Hospital workers practice social distancing hile receiving meals from Frontline Foods. Courtesy of Frontline Foods
In normal times, restaurants give: They donate time, money and food to fundraisers, special events and behind-the-scenes operations to support local charities and to say thank you to the community that has sustained their business. But these aren't normal times: Restaurants have been among the hardest-hit industries both economically and operationally during the coronavirus shutdowns. Now new groups are popping up to give chefs and restaurant employees a helping hand while also supporting medical workers fighting the pandemic.

Almost immediately following the statewide restaurant shutdown that went into effect on March 17, a new model emerged that gave customers the chance to pay for a meal that would be sent to an ICU or other health-care facility treating COVID-19 patients around the clock. The money would go to the restaurant, helping to keep employees working, and the meal would go to clinicians and other medical staffers who needed a break. The model proved to be a win-win, as they say in the corporate boardroom, and quickly spread in popularity.

The Bindery was the first Denver restaurant to sign on with Frontline Foods.
Courtesy of Frontline Foods
In mid-March, Frontline Foods formed in San Francisco with a goal of providing a consolidated donation point for folks wanting to chip in; the organization began recruiting restaurants to prepare the food and located facilities where the meals could be sent. It didn't take long for the action to gain momentum; within a month, new chapters had sprung up in more than thirty cities around the country, including Denver.

Brittany Myers lives in the Mile High City but travels extensively for her job — at least she did until COVID fears put a damper on travel. With extra time on her hands, she was looking for a way to help medical professionals putting their lives on the line, and when she heard about the expansion plans for Frontline Foods, she put her name in the hat and was selected to lead the local chapter. "I'm so grateful that this opportunity came up," Myers says. "They are risking their lives and their families' lives, so I wanted to make sure that we all show our appreciation."

But Frontline Foods is about more than just appreciation in the form of a hot restaurant meal; sometimes it's about basic sustenance. Many hospitals have closed their cafeterias for safety reasons, so the only food available on site comes out of vending machines, Myers explains. In addition, workers are doing long shifts without time for meal breaks and often get off at odd hours, when most restaurants and grocery stores are closed — so they can't even stop for food on the way home. While some hospital workers initially felt embarrassed about taking free food — since they may have money but no time or place to spend it — they got over that once the food arrived and they realized that the orders were helping keep restaurant workers employed. 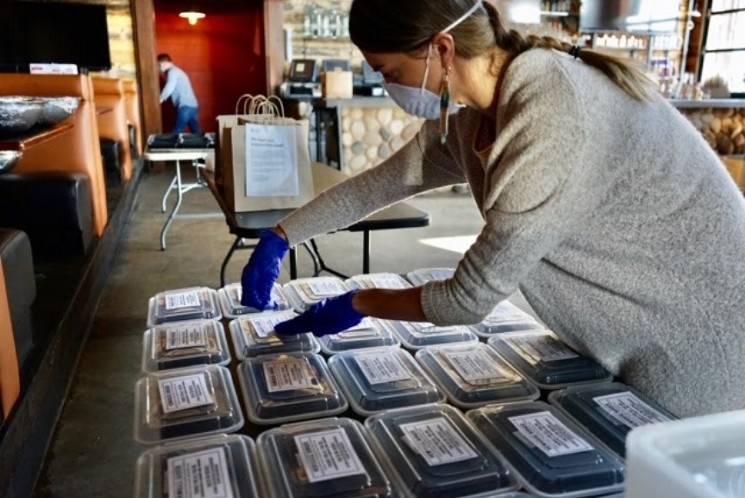 Workers at the ViewHouse pack meals destined for health-care workers.
Courtesy of Frontline Foods
And then there's the understanding that their own efforts are recognized. "Morale is a big deal," Myers states. "This appreciation from the community is such a boost."

The first Frontline Foods Denver order was 150 meals made by The Bindery and sent to Swedish Medical Center. Now the organization is delivering a total of 800 meals a week to several health-care centers, among them the VA Eastern Colorado Healthcare System, Denver Health, UC Health University of Colorado Hospital, National Jewish Health, and St. Anthony Hospital. And the number of kitchens participating has grown, too, to now include Chook Chicken, Ohana Island Kitchen, Brider, Northside Market & Eatery, ViewHouse, the Culinary Creative Group (Bar Dough, Señor Bear and others) and the Gastamo Group (Park Burger, Park & Co., Birdcall and Homegrown Tap & Dough).

Cooks and volunteers pack bags of food headed to hospitals.
Courtesy of Frontline Foods
The current operation has raised more than $20,000 so far, but Myers would like Frontline Foods Denver to grow as COVID cases reach their peak and hospitals fill up. "Donations are the only thing limiting us from scaling," she explains. "There's no shortage of restaurants or hospitals. They'd have us deliver every day if we could do it."

Frontline Foods recently partnered with World Central Kitchen, the nonprofit founded by chef/restaurateur José Andrés to provide hunger and poverty relief, especially after natural disasters. "World Central Kitchen serves people around the world by partnering with grassroots organizations like us," Myers notes. "And they have 501(c)(3) status, so donations are now tax-deductible."

Frontline Foods lists suggested donations of $50 to $5,000, which will feed three to five clinicians once or an entire ICU department for a week, respectively. Get more information at frontlinefoods.org/denver.
KEEP WESTWORD FREE... Since we started Westword, it has been defined as the free, independent voice of Denver, and we'd like to keep it that way. With local media under siege, it's more important than ever for us to rally support behind funding our local journalism. You can help by participating in our "I Support" program, allowing us to keep offering readers access to our incisive coverage of local news, food and culture with no paywalls.
Make a one-time donation today for as little as $1.