The Real Story Behind the Oskar Blues/Guns N' Roses Lawsuit 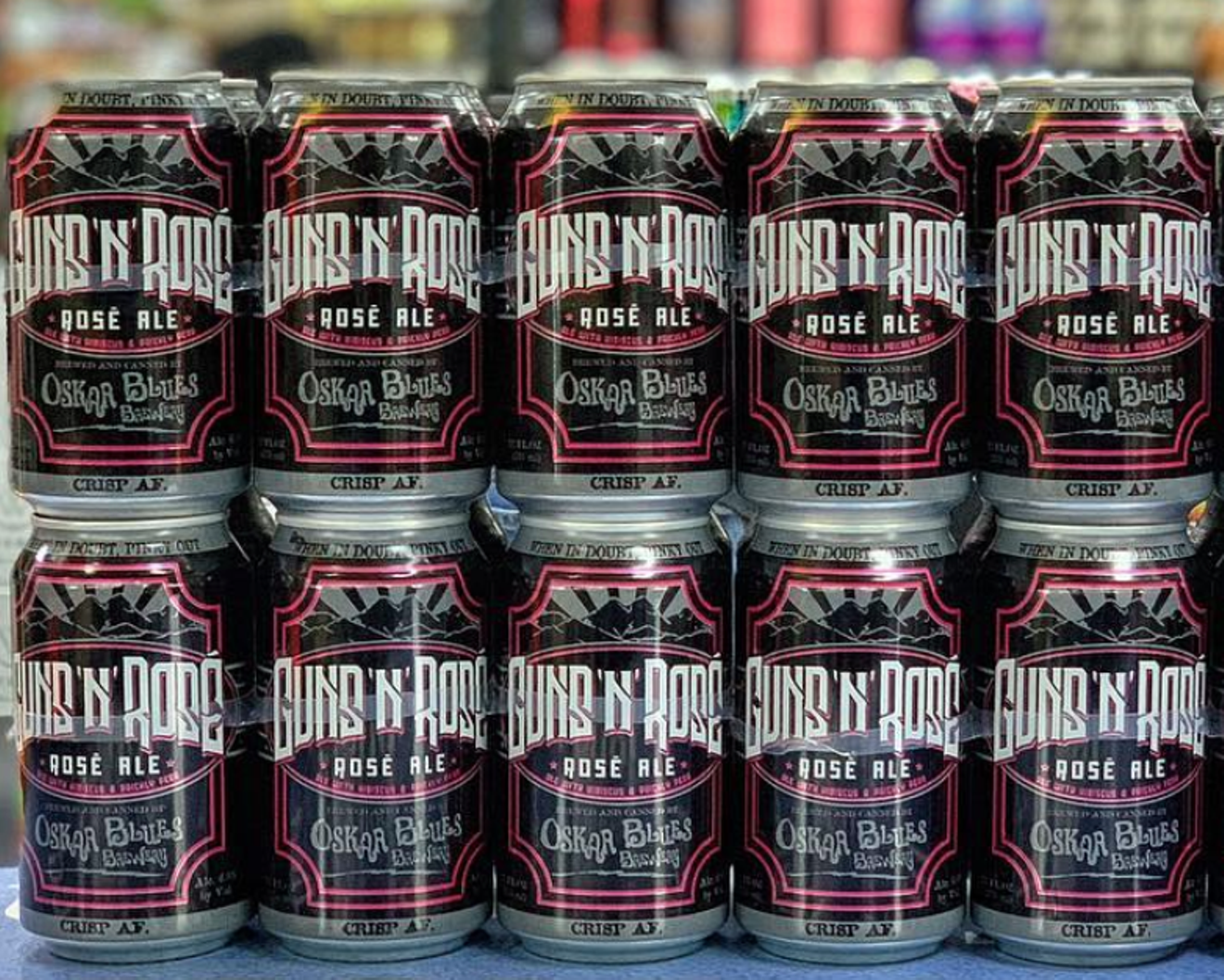 Oskar Blues is one of the smartest players in craft beer today. The creator of Dale’s Pale Ale, which can be found in just about every corner of the country, was also the first craft brewery to can its beer, the inventor of the Crowler machine, and the force behind Canarchy, a collective of seven investor-backed beer companies that together have become the eighth-largest craft brewery in the U.S. The Longmont-based brewery is always on message, always on point and always two steps ahead.

So why would Oskar Blues make a blunder like the one that got it sued last week by Guns N' Roses, the iconic ’80s metal band fronted by Axl Rose, which objected to the brewery’s use of the name Guns 'N' Rosé for one of its most recent canned beers?

There’s no easy answer to that question — and Oskar Blues declined to comment for this story — but court documents filed in the Central District Court of California shed some light on how the dispute between the band and brewery developed, and why at least one of the parties is likely to end up writing a big check.

In August 2018, Oskar Blues filed a trademark application for Guns ‘N’ Rosé, brewed with hibiscus and prickly pear. The rosé style, which plays off the dry, tart or fruity flavors and the pinkish color of rosé wines, gained popularity last year and recently has really taken off, with most major craft breweries releasing a version.

Last September, the federal Alcohol and Tobacco Tax and Trade Bureau (TTB) approved the brewery’s striking black-and-pink label for Guns ‘N’ Rosé. When I saw it, I wondered if the famously music-forward brewery had struck up a partnership with the band. If not, the name was clearly a lawsuit magnet, so I wondered if Oskar Blues was trying to elicit a cease-and-desist simply for the media attention, as some other breweries have done. It didn’t seem like the brewery’s modus operandi, but then again, Oskar Blues had also filed a bewildering trademark application for the Queen of Beers — another lawsuit magnet — that it later abandoned. 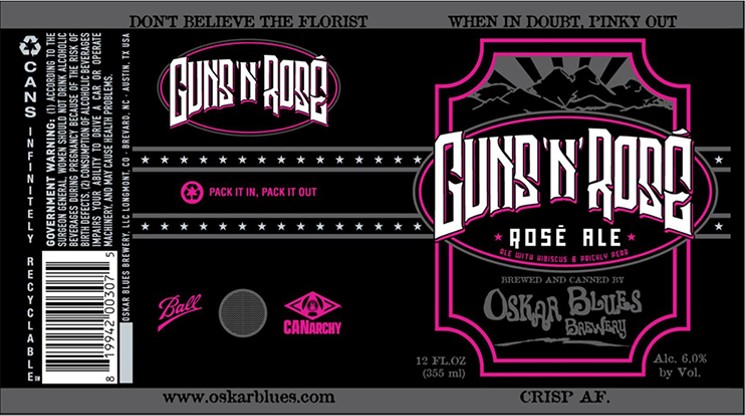 Oskar Blues's Guns 'N' Rosé debuted in cans in February across the country.
TTB
In December, the band’s business manager called the brewery’s CEO, according to the lawsuit filed May 9. When their informal conversation went nowhere, the band’s lawyer sent a cease-and-desist letter to Oskar Blues and its founder, Dale Katechis, dated December 21, 2018.

“GNR has earned widespread recognition by virtue of the band’s remarkable success and thirty year existence,” the letter read. “GNR owns and has registered the name and trademark Guns N' Roses in various countries, including in the United States, for use with clothing, musical sound recordings, and musical performances.”

The band also protested the brewery’s trademark with the TTB.

“Oskar Blues named its beer Guns ‘N’ Rosé as a reference to the fact that its beer is a rosé-style ale with a crisp profile,” Burkinsky wrote. “There are other alcohol beverage producers using the same name, including at least two Guns N’ Rosé wines. … We believe that Oskar Blues’ beer can similarly coexist without creating any likelihood of confusion or dilution of GNR’s marks.

“We trust that our response above resolves this matter,” she concluded. Guns N' Roses performed at Mile High Stadium in August 2007.
Aaron Thackeray for Westword
It didn't, and in February, Oskar Blues released the beer across its nationwide footprint — promoting it on social media and selling it in cans and on draft. But on March 13, it received another letter from the band. And this is where things get more interesting, explains Mike Drumm, a Denver attorney who specializes in trademark law for dozens of local — and national — breweries. “Guns N Roses is using the ‘famous’ trademark argument — since it does not make beer — in asserting its rights,” he says.

A mark is considered to be "famous" under the Trademark Act of 1946 (known as the Lanham Act) if it is “widely recognized” in the United States by the general public — a household name, in other words. Google is famous. So is Walmart, Apple, Coca-Cola, Nike and McDonald’s. Even Victoria’s Secret is famous. As such, they enjoy more legal protection than other trademarks. But proving that a trademark has that kind of recognition can be tricky. Some marks are simply “popular,” without being famous. To prove fame, the applicant must show the “volume and reach of the sales of the products offered bearing the mark.”

Is Guns N’ Roses that famous? Do Axl Rose and Slash, “Welcome to the Jungle” and “Sweet Child of Mine” deserve the same respect as the Big Mac? After apologizing for the delay in its response, the firm of Sheppard Mullin Richter & Hampton, representing Guns N' Roses, asserted that the band is, indeed, that “famous” and therefore entitled to wider trademark protections.

It once again demanded that the brewery stop selling the beer and abandon its trademark application — but left the door open for an “amicable” resolution.

It also, amusingly, scolded the brewery in true beer-geek fashion: “We do not accept the explanation that Oskar Blues named its product Guns ‘N’ Rosé based solely on the alleged color and taste profile of its beer. There are many words that Oskar Blues could have used to identify the purported 'rosé-style ale' of its beer; Oskar Blues specifically chose to use a variation of GNR’s famous trademark instead.”

Oskar Blues replied with some scolding of its own, then threw down the gauntlet. “We are in receipt of your March 13 letter. We were surprised to receive it as it came almost two months after our January 22 response. During that two-month interval, my client reasonably believed that our correspondence had allayed your client’s concerns, and continued with its plans to release its Guns N’ Rose beer,” Burkinsky wrote. Oskar Blues promoted Guns 'N" Roses on Twitter.
Oskar Blues Twitter
She went on to dispute the band’s claims of trademark infringement — and then took a direct shot. “We see no evidence that your client has reached a level of fame to warrant the extraordinary remedies of the Trademark Dilution Revision Act of 2006.” Ouch. (Apparently, dating a Sports Illustrated supermodel ain't what it used to be.)

“We furthermore note that your client’s delay in responding to our letter, especially in light of its knowledge that Oskar Blues was planning to release the Guns 'N' Rosé beer in cans in February 2019, has caused significant prejudice to Oskar Blues. Had my client known prior to that release that your client had continued objections, it could have considered other arrangements. At this point, rebranding and repackaging its beer requires significant time, effort, and expense,” she continued.

And finally, Burkinsky said that while Oskar Blues was willing to abandon its trademark application and permanently cease all sales of Guns 'N' Rosé beer and related merchandise, it wouldn’t do so before March 31, 2020.

The band's attorneys filed suit on May 9, demanding full damages and pointing out that Oskar Blues hadn’t exactly been conciliatory.

In the meantime, Canarchy had applied for three more TTB labels for the same beer, using two new names, Can-O-Blush, a play off its new Can-O-Bliss IPA, and Rose All Day — which comes with the tagline: Heavy Metal Banned (see below). So, no, not exactly conciliatory at all.

How will this play out in court? Most trademark cases are settled behind the scenes. But if the case goes to trial, it will be interesting to watch Guns N' Roses try to prove its alleged "famous" status.
KEEP WESTWORD FREE... Since we started Westword, it has been defined as the free, independent voice of Denver, and we'd like to keep it that way. With local media under siege, it's more important than ever for us to rally support behind funding our local journalism. You can help by participating in our "I Support" program, allowing us to keep offering readers access to our incisive coverage of local news, food and culture with no paywalls.
Make a one-time donation today for as little as $1.