Pasta for Dinner Is Coming to Il Porcellino on Tennyson Street

Il Porcellino owner Bill Miner breaking down a hog. Courtesy Il Porcellino
"I love making handmade pasta at home with my wife and kids," says Bill Miner, owner of Il Porcellino Salumi, an artisanal charcuterie company that has a deli and retail store at 4324 West 41st Avenue, just off Tennyson Street. Now Miner and his team are gearing up to share that passion for pasta at Il Porcellino.

"The idea has been kicked around for quite some time," Miner notes, adding that while the concept was put on pause when the pandemic hit, "things are moving pretty fast now." New equipment is being installed next month as part of the prep for launching dinner service at the deli for the first time in its seven years in business.

Miner is planning some Il Porcellino Pasta pop-ups for late February, and hopes to launch officially by early March. Once that happens, the deli will continue to serve breakfast and lunch sandwiches during the day, then transition to dinner after 4 p.m. Wednesday through Sunday.

Guanciale will be used in carbonara when Il Porcellino launches its new pasta concept.
Il Porcellino Pasta/Instagram
"I think the Tennyson neighborhood will be really supportive of it," Miner says. "I've had a really good core staff for the last couple years; they're excited to try something new. And I'm also going to be able to hire a couple new employees. It's humbling to be able to offer jobs to people, and it means we're growing."

Il Porcellino has been growing in other ways, rapidly expanding its wholesale business. But the new pasta concept will give Miner a chance to flex more culinary muscles. Charcuterie-making, like baking, is very precise and takes time before the product can be enjoyed — "It's like watching paint dry," Miner jokes — and he says he's "excited to utilize whole pigs in a different manner."

The menu will include a number of starters, including housemade focaccia and vegetable-based dishes. One definite offering will be a meatball with polenta. "We're butchering pigs every week, and we process beef, as well, so it will probably be a pork and beef meatball," Miner explains.

Il Porcellino's guanciale — cured pork jowl made from Berkshire hogs — will be used in a carbonara dish along with crispy pork belly, pecorino broth, English peas and butter. Miner is also excited about the tortellini, which will be filled with mortadella. 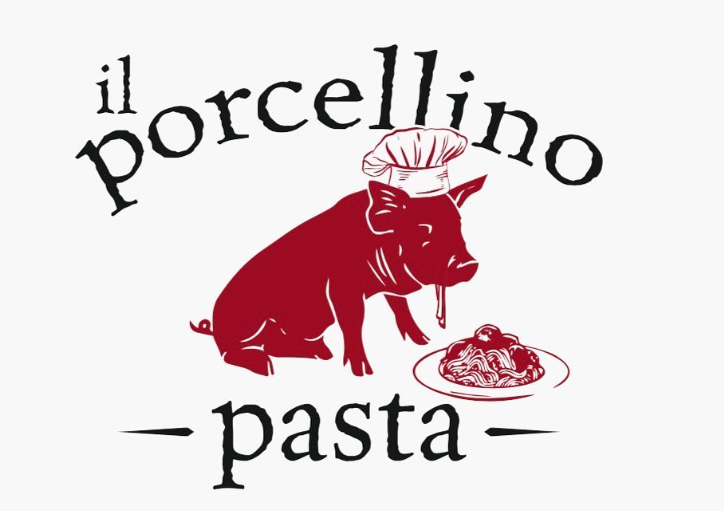 The new Il Porcellino Pasta logo.
Il Porcellino Pasta/Instagram
Though many of the dishes will use meat products, both cured and fresh, there will also be some vegetarian-friendly selections, such as a vegetable lasagna and a seasonally rotating ravioli.

Also on offer will be hoagies, extra-large versions of some of the sandwiches that the deli currently serves. There will be a duo of entrees that two can share, as well: a roasted, all-natural chicken and a classic porchetta, both served with a vegetable and pecorino polenta.  A lineup of desserts will round out the new offerings; expect classics such as cannoli and cheesecake.

This is just the latest entry on an ever-changing Tennyson Street, where recent additions like Bakery Four and Id Est Hospitality's latest project, Hey Kiddo and Ok Yeah, continue to up the culinary game in the Berkeley neighborhood.
KEEP WESTWORD FREE... Since we started Westword, it has been defined as the free, independent voice of Denver, and we'd like to keep it that way. With local media under siege, it's more important than ever for us to rally support behind funding our local journalism. You can help by participating in our "I Support" program, allowing us to keep offering readers access to our incisive coverage of local news, food and culture with no paywalls.
Make a one-time donation today for as little as $1.