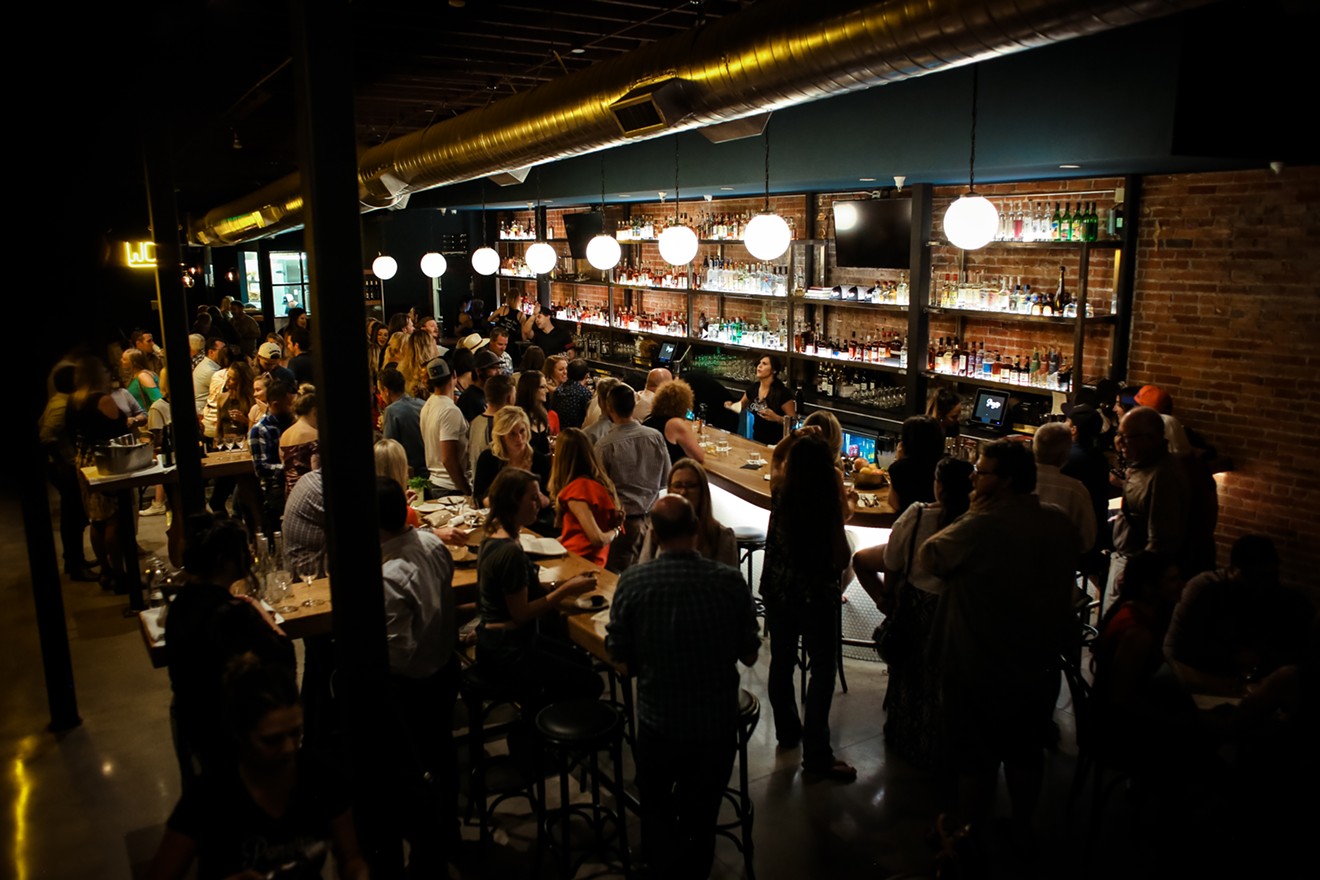 From opening night in 2018 to today, Pony Up has been an industry go-to. REN Creativ
For months, night owls have been bemoaning the lack of late-night food options in Denver. Most of the town's once-24/7 eateries are still closed by 10 p.m, and many of the other spots that used to stay open past midnight are now dark long before the witching hour. Night owls are not the only ones suffering, though: Restaurant and bar workers are finding themselves short of post-shift options, too.

Enter Pony Up. The LoDo eatery from owner/operator Angela Neri and opening chef/partner Sheamus Feeley at 1808 Blake Street celebrated three years in business on July 22, and its mission has been the same since day one: to provide a place for those in the restaurant industry to gather, drink and eat French dips and other hot, filling bites after work. "That's been the goal from the beginning," explains Neri, "and that never changed for me."

Not even through the pandemic-related closures and restrictions of 2020. During those dark days, when Pony Up wasn't able to offer late-night food (or any indoor dining at all), Neri still found ways to reach the restaurant community. "I partnered with liquor companies, and they sponsored meals for the industry," she says. "So every week we had Patrón or the Family Jones or Spring 44, and they would buy thirty meals; then we'd send out a sign-up [via social media], and people would be able to come and pick up a meal. I think that kept us engaged with our guests."

While Neri appreciates every person who comes into Pony Up, she made it a priority to take care of her restaurant and bar colleagues, even as so many other challenges loomed. "I wanted to make sure they knew we were not forgetting them," she explains. "We're still there; we're still doing whatever we can to take care of everybody, and I think that's what kept everyone connected and why they're coming back now."

Pony Up is currently open every day from 4 p.m. to 1 a.m. (2 a.m. on weekends) and serves its full menu throughout; it also offers happy-hour drink specials daily from 4 to 7 p.m. But returning to its late-night roots wasn't that easy once pandemic restrictions were lifted. "We were forced to be closed at 10 p.m. for so long," Neri recalls, "and then it happened pretty quick — like all of a sudden it went from 10 p.m. to 1 a.m., and that's just so many more hours to staff. I just think so many people couldn't go back to 1 a.m. right away." 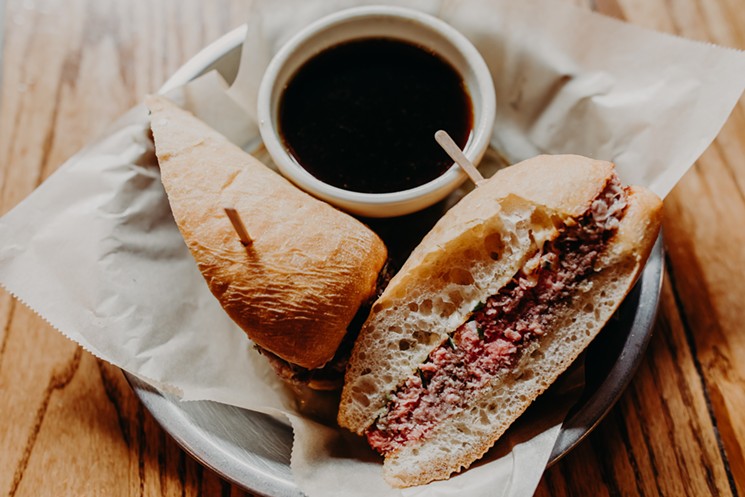 The entire menu, including five French dips, is available until close.
Grace Gatto
But even though it was a challenge, Neri knew she had to get Pony Up back to its traditional hours as soon as possible. "Our biggest sales were midnight to 1 a.m.," she notes. "But two things hit us pretty hard on the comeback: It was the middle of baseball season, and games get out around 9 or 10 p.m., plus concessions weren't 100 percent open...and then with travel opening up again, the hotels — which don't have late-night food — were sending everyone to us. We had the late-night traveler and the late-night baseball guest, so for me, it was like, 'I need to get on top of this immediately. And I need staff.'"

Lack of staff has been a consistent problem in the Denver restaurant scene. Restaurateur Troy Guard was forced to temporarily close FNG and redistribute employees to keep his other concepts running smoothly. Pindustry, the massive entertainment complex in the new Arapahoe Entertainment District, opened with an abridged food menu because it had only three team members in the back of the house. The Celtic cites staff shortages as the motivation for bringing in a pizza vending machine to feed its late-night customers. It's nearly impossible to have a conversation with anyone working in a restaurant right now without the labor shortage coming up.

While some people complain that former workers have become accustomed to unemployment, Neri doesn't see it that way. "[Restaurant employees] were all waiting to come back to work, but so many people left the industry," she notes. "So many people went and did other things because they had to; they have families to feed, and unemployment wasn't enough."

While there may be fewer experienced restaurant workers looking for jobs in the field right now, at least there are some. "It was about two weeks of it being really difficult, but then word got out that we were looking, and it became much easier," Neri says of the Pony Up hiring process. "But it was a lot of recruiting on my part, too, reaching out to people I know in the industry. We luckily have a pretty good reputation in the city.

"I had three new people that I hired immediately, got them trained up for baseball season, and now I just brought on three more people," she adds. "I'm feeling really good about the amount of staff we have."

My Magical Pony is one of the restaurant's signature cocktails.
Grace Gatto
Now that she has that staff, Neri is focused on retaining her employees by applying lessons learned during the pandemic. "I think it's important to just take care of yourself and be aware of what you need," she says. "I want my team to have quality of life. The last thing I want to do is overload everybody."

Especially when her team is just getting used to late-night hours and the physical demands of hospitality work again. "Your body's not used to it," she says. "We were on a break. For a hot minute, we were going to bed at 9 or 10 p.m. every night. ... Your body has to get used to your sleep schedule and your work schedule, and your mental health has to follow."

All of that factored into Neri's decision to keep Pony Up closed at lunch for the time being. "Those are not priority hours," she says. "But late-night, definitely."

With a central location that's easily accessible from neighborhoods with thriving restaurant scenes like RiNo, Highland and Uptown, Pony Up is a convenient stop for post-shift hangs. Convenient, and crucial: Most of Denver's former industry go-tos have closed permanently (Euclid Hall and St. Ellie) or not yet added late-night hours (notably, My Brother's Bar, which currently closes at 10 p.m. Monday through Thursday and 11 p.m. on Friday and Saturday).

"When we were full, it was great being able to send people to Euclid Hall or to My Brother's for a great burger," Neri recalls. Without those options, she recognizes the importance of making sure Pony Up is open, with consistent and dependable hours. "The worst thing is getting off work thinking you can come get a sandwich or wings and a beer before you go to bed, only to find we're not open."

People are looking for more than food and drinks, too. "When you're in the restaurant industry, it's just go-go-go, so you need an hour to be stimulated but relaxed at the same time," Neri explains. "You're not having to work, but you have other people around you who have been doing the same type of work, and you have the ability to vent and have that time to spend with the restaurant-industry community."

After more than sixteen months of uncertainty and stress, being able to find both a French dip and community at midnight is the kind of comfort that people who spend so much time serving others need and deserve.

Pony Up is located at 1808 Blake Street and is open 4 p.m. to 1 a.m. Sunday through Thursday and 4 p.m. to 2 a.m. Friday and Saturday. For more information, call 720-710-8144 or visit ponyupdenver.com.
KEEP WESTWORD FREE... Since we started Westword, it has been defined as the free, independent voice of Denver, and we'd like to keep it that way. With local media under siege, it's more important than ever for us to rally support behind funding our local journalism. You can help by participating in our "I Support" program, allowing us to keep offering readers access to our incisive coverage of local news, food and culture with no paywalls.
Make a one-time donation today for as little as $1.