Pete's Kitchen is one of six restaurants opened by Pete Contos that are still running. Danielle Lirette
Lighting up the night sky over East Colfax Avenue with bright neon, filling the bellies of night owls, blurring the distinction between Greek cuisine and the broader canon of diner grub, restaurateur Pete Contos ruled over Greek Town for more than sixty years with a string of bars and eateries that have become as synonymous with Denver as Colfax itself. Contos passed away on Sunday, May 12, at the age of 85.

Contos arrived in Denver from Greece in 1955, and by the early 1960s he had saved enough money, working his way up from dishwasher, to open his own place. Starting with Pete's Satire Lounge in 1962, he added Pete's Gyros Place, Pete's Greek Town Cafe and a Greek nightclub and an ice cream and coffee shop that are now closed. He also spread beyond Colfax with Pete's Central One and Pete's University Cafe further south in Denver, and in 1988 bought Pete's Kitchen, perhaps now his most recognizable fixture, next door to the Satire, taking over a diner that had originally opened in 1942. 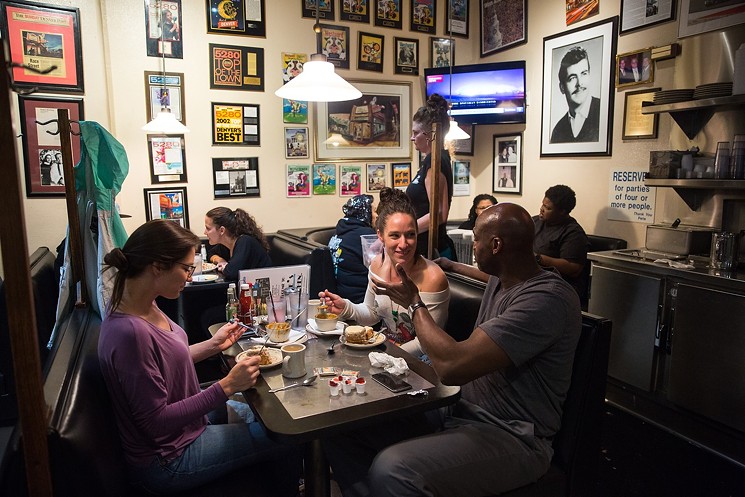 Pete Contos still watches over the dining room at Pete's Kitchen.
Danielle Lirette
Even twenty years ago, Contos was thinking of the future of Colfax. "Colfax has been cleaned up...I think it's the business owners, mostly," he said a 1997 interview with Westword's Alan Prendergast. At the time, the stretch of Colfax between Columbine and St. Paul streets had just been named Greek Town by the city, thanks to the efforts of Contos and other Greek restaurant owners who were active in the community. Today, light posts, trash cans and bus stops are still painted Grecian blue to mark Greek Town, even if the neighborhood is far less Greek than it once was. In 2006, Contos was inducted into the Colorado Restaurant Association's Foodservice Hall of Fame.

The restaurateur stayed engaged with the community, as Mayor Michael Hancock, who posted this note on his Twitter account, is aware:

Pete Contos was an institution! He’s not just known for his great food, but for his great conversations, business acumen and support for the Denver community. He will be missed!!

Sad to hear about the passing of Pete Contos, one of Denver’s great restaurateurs and an immigrant who truly embodied the American dream. I always loved visiting Pete's restaurants, whether it be for a gyro or just a cup of coffee. He will certainly be missed.

The Satire Lounge and Pete's Kitchen remain favorites with Denver's young and hip crowd, as well as with longtime Colfax denizens, all of whom plow through stacks of pancakes, piles of fries and pots of cheap coffee from dawn until well past last call.

Contos gave the city these timeless gathering places that we hope will continue to thrive for years to come.
KEEP WESTWORD FREE... Since we started Westword, it has been defined as the free, independent voice of Denver, and we'd like to keep it that way. With local media under siege, it's more important than ever for us to rally support behind funding our local journalism. You can help by participating in our "I Support" program, allowing us to keep offering readers access to our incisive coverage of local news, food and culture with no paywalls.
Make a one-time donation today for as little as $1.