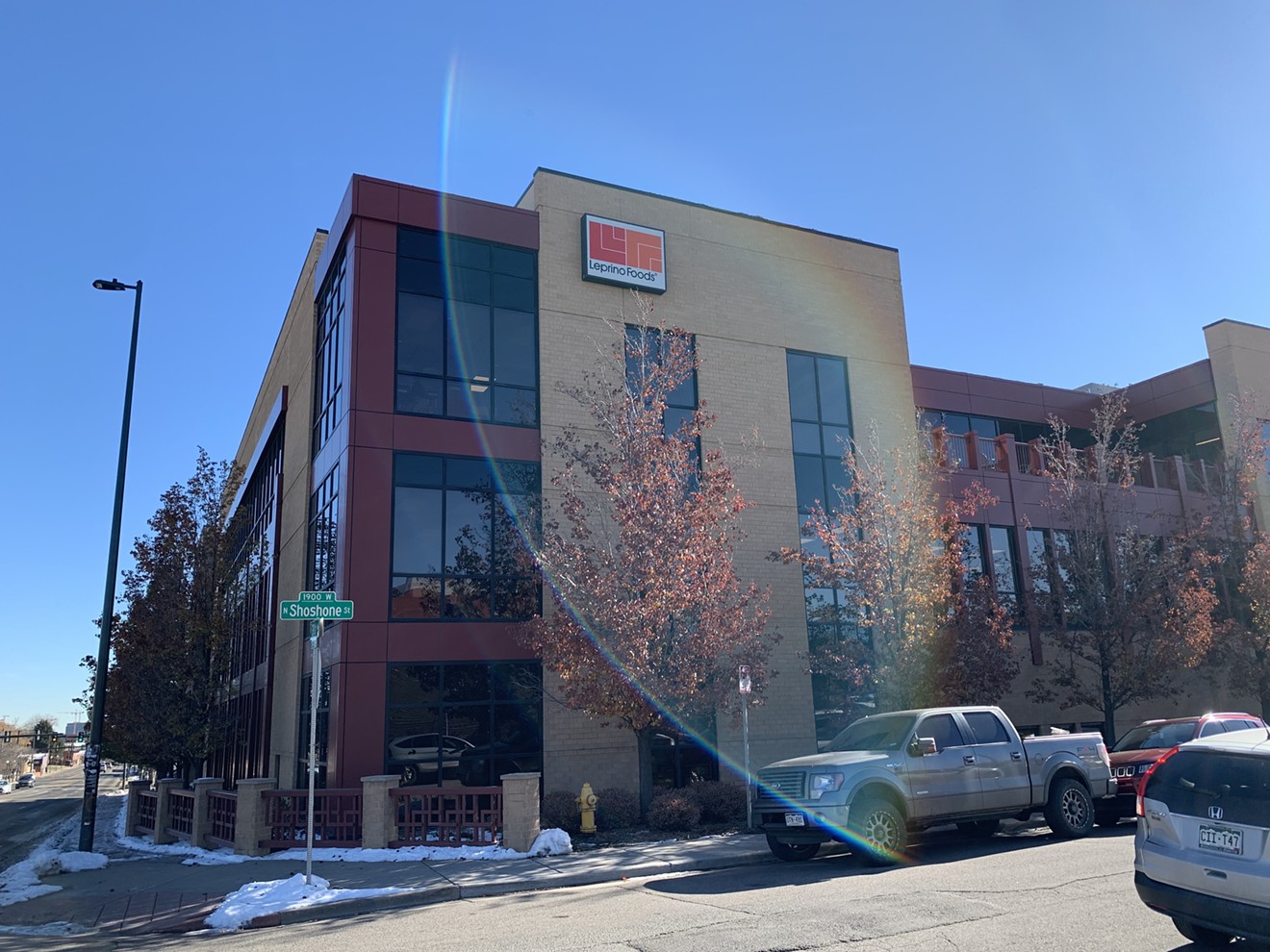 The Leprino Foods headquarters in Denver. Helen Xu
The Leprino Foods trial, which started on November 28, is halfway through, and there’s already been tears on the witness stand, a dramatic motion for mistrial, and big-dollar figures being thrown around.

Leprino Foods is a private, Denver-based company that holds monopoly power over the mozzarella cheese industry. At the center of the case is its reclusive billionaire owner, James "Jim" Leprino, who, along with his two daughters, is being sued by nieces Nancy and Mary Leprino (daughters of his brother, Michael Jr.) over a 2017 special distribution of tax-free money made to shareholders. Last week, we served up a preview of the messy details of the case. Now, here are nine takeaways from this high-stakes civil trial so far:

“This is a case about spite”
That’s how attorney David P. Hersh, of Burg Simpson Eldredge Hersh & Jardine PC, described it in his opening statement representing minority stakeholders Nancy and Mary Leprino. He traces the root of that spite to 1965, when Jim and Michael Jr.’s father insisted the brothers exchange 25 percent of each other’s business. According to Hersh, Michael Sr. insisted on this to provide the younger brother, Jim, with a financial safety net in case the cheese business failed. In a video deposition, Jim Leprino admitted that he felt this swap was unfair, and felt his brother had cheated him.

“You have to decide: Did we live up to our fiduciary duty?”
This is what attorney Michael J. Hoffman, of Bryan Cave Leighton Paisner LLP, representing Leprino Foods, Jim Leprino and his family, asked the jury. In his opening statement, Hoffman characterized everything Jim Leprino has done — from the 2017 conversion of the company from an S to C corporation to insisting the minority shareholder’s stock is “worthless” — as in the best interest of the company and family. He brought up tables and graphs showing that the plaintiffs have received almost $162 million in less than a decade of owning the stock, including $90 million on a single day for the 2017 conversion.

A secret recording
One of the more compelling pieces of evidence is a secret recording of Jim Leprino talking about why his niece’s shares are worth zero dollars. After Michael Jr. passed away in August 2018, his estate-planning administrators needed to value the 25 percent shares held in various trusts for his daughter to report to the IRS. In 2019, Patrick Gibbs, a fiduciary of those trusts, met with Jim Leprino at the Leprino Foods headquarters in his private third-floor office and secretly recorded the conversation on his smartwatch. In the recording, Hoffman says, Jim Leprino is advocating for his nieces, saying, “If you use common sense…they shouldn’t pay one cent of inheritance tax for the shares they own. You're doing my nieces wrong by not fighting for them.” Jim goes on to explain that there is no market to sell his stock, the company isn’t going to redeem it, and no third party would be interested in the minority interest. Gibbs is heard in reply saying, “They [Michael Jr.’s daughters] would love to use zero.”

Nancy Leprino's emotional testimony
On November 29, Nancy Leprino took the witness stand for almost six hours and described Jim Leprino as bitter and angry at his older brother. Her most poignant testimony was about a moment in 2014 when Jim Leprino kicked his niece out of the office saying, “The door is shut to you and your sisters doing anything in this building.” Fighting back tears, she went on to read aloud from a letter she wrote in response: “I know Grandpa and Grandma are looking down from heaven and praying that you and dad work out your differences. You are brothers. What you have created is breathtaking and truly inspiring, something my father always acknowledges.”

Jim Leprino's video deposition
The jury was able to hear Jim Leprino’s side on November 30 from his video deposition that played for almost three hours. In it, he acknowledged the 2014 ban of Nancy and her sisters but said it lasted only a few weeks, and emphasized his commitment to family. He also testified that he hadn’t warned his older brother before using his family’s majority position in the company to force him from the board of directors over Michael Jr.’s strong objections. “I was making room for more productive boardmembers,” Leprino said. "[Michael Jr.] spent a lot of his time on his own ranch and olive oil business and very little time in his office in Denver.” The plaintiffs seized on the minutes of that same board meeting, which showed that at 9:10 a.m., Michael Jr. was removed from the board, and at 9:20 a.m., the board received a presentation from their lawyers on how to devalue or eliminate value of Michael Jr.’s shares. Afterward, Jim and his daughters voted to change the bylaws so that Leprino Foods would never pay out dividends to shareholders.

A motion for mistrial
Nancy was asked by the defense about her demand to dissolve the Leprino Foods company, noting that a sister who is not party to this lawsuit said in a deposition that Nancy appeared “gleeful” at the thought of destroying the company. One juror reacted by rolling her eyes and saying, “What the fuck?” In response, lawyer Michael Burg made a motion for mistrial, claiming that Judge Scoville had told the lawyers to not bring up dissolution, and that the line of questioning prejudiced the jury. After twenty minutes of transcript review, Judge Scoville dismissed the motion and declined to dismiss the juror in question.

The defense's strategy
The defense lawyers have tried to call into question whether the plaintiffs would even have taken an opportunity to loan back the money they received from the special distribution if one was available. They point to the trusts that Michael Sr. set up for his daughters, which explicitly state to not sell, not own stock personally, and not make unsecured loans. Before the trial began, the plaintiffs were successfully able to get evidence thrown out that showed that Nancy and Mary Leprino’s investment vehicles targeted a 7 percent-plus return rate, whereas the loan in question only offered 2.68 percent. During the trial, Hoffman showed jurors a 2017 handwritten note from Nancy that he claims shows that the sisters were aware of the loans but didn’t make an effort to be involved.

Expert witnesses
On December 1 and 2, expert witnesses were brought in to explain to the jury the technicalities of fiduciary duty, corporate governance and corporate code. The jury, passing questions they had written on paper to the law clerk, framed questions around the differing obligations for majority versus minority stakeholders and the need for Leprino Foods to take a $405 million loan from its majority stakeholders when it has a billion dollars cash on its balance sheet. A witness who was formerly a senior executive at Leprino Foods explained that the company spent an average of $50 million per month on milk alone. He elaborated that the corporate documents stated, “In all scenarios, the company’s strong preference is to avoid borrowing money from third party sources.” The defendants framed that decision as evidence of the need for Leprino to be cash-heavy.

Nancy and Mary Leprino are seeking $600 million to $900 million in damages
The plaintiffs' lawyers argue that this amount is the fair market value of their shares, according to Timothy Meinhart, author of The Handbook of Business Valuation, who testified about his work for the plaintiffs on December 2.

There are still multiple days of testimony left, with closing statements set for Friday, December 9. On December 2, Michael Burg, a lawyer for the plaintiffs, felt confident. “If this case was over $100,000, it would still be [about] what’s right and what’s wrong, [and] the way you deal with your minority shareholders. The fact that it’s worth significantly more than that doesn’t change that fact — that it’s still wrong what [Leprino Foods] did," he said.

The defense lawyers declined to comment.
KEEP WESTWORD FREE... Since we started Westword, it has been defined as the free, independent voice of Denver, and we'd like to keep it that way. With local media under siege, it's more important than ever for us to rally support behind funding our local journalism. You can help by participating in our "I Support" program, allowing us to keep offering readers access to our incisive coverage of local news, food and culture with no paywalls.
Make a one-time donation today for as little as $1. 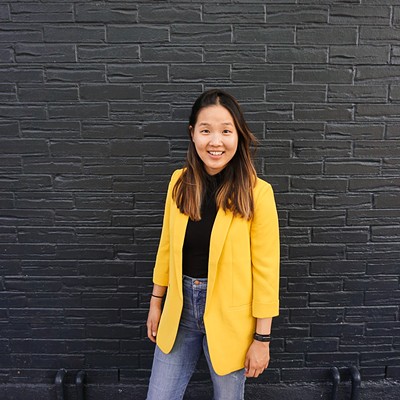