The answer must have been a strike, because Simons, a well-known and longtime Colorado beer maker, is joining the unusual Wheat Ridge business as a part-owner and head brewer.

Simons, brewery general manager Joe Malouff, and advisor and financial backer Grant Babb plan to open Live Slow this fall in the redeveloped Paramount Bowl building, at 2625 Kipling Street, which is now part of Gold's Marketplace, a shopping center that is being overhauled with a new look and new tenants. It'll have six lanes of bowling, some bowling alley-style food and easy-drinking beers.

Babb is the co-founder of Joyride Brewing in Edgewater, and Malouff works in the taproom there, which is how they got to know Simons. "I've been going there for quite a while," says Simons, who lives close to Joyride. "I reached out to Grant and asked if they were looking for a brewer, and the response was 'Maybe.' So we met over the course of a few months, talking and hanging out and having beers."

Eventually the three decided they could "stand each other," Simons says with a laugh. It was good timing, as Simons had left his job in January as head of brewing operations at Dry Dock Brewing after seven years. Before that, Simons made award-winning beer at Backcountry Brewery in Frisco.

Live Slow takes its name and ethos from Malouff, whose spirit animal is the sloth — a creature whose motto is "Live slow, die whenever." In this case, however, it will be "Live slow, drink whenever," he says. 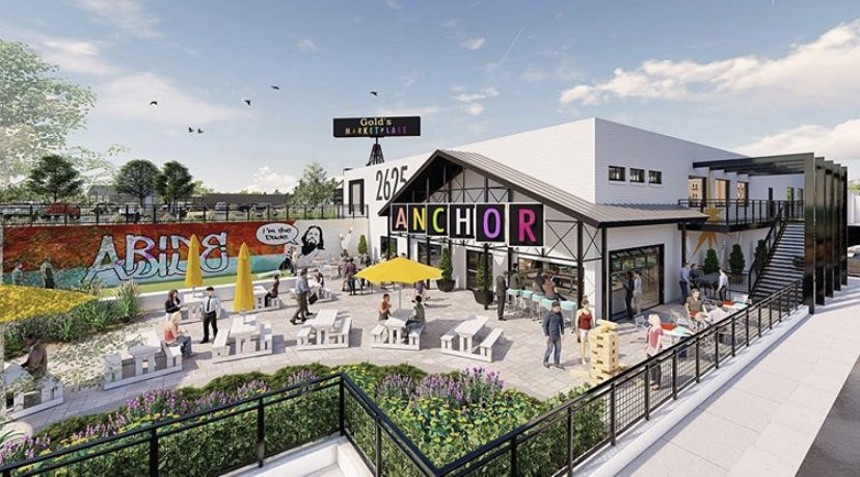 A rendering of what Live Slow will look like after renovation is complete.
Gold's Marketplace
Despite the motto, however, Malouff, who worked as a beertender at LandLocked Ales for a few years before moving to Joyride, has invested a lot of energy and forethought into the brewery. The twenty-barrel brewhouse will be custom designed to fit the unusual space, while the fermenters will be lined up parallel with the bowling lanes. The bar and the tables, meanwhile, will be made from the reclaimed wood of the other six lanes that existed in Paramount Bowl, which had twelve total.

There will also be a patio with a possible stage and TVs. The walls between the taproom/bowling alley and the brewery will be partially made of plexiglass to give the whole place an open feel.

"With the bowling alley being a part of it, and since we have a kitchen, we want to be family-friendly. But we also want the late-night crowd," Malouff says. Live Slow's location at the corner of Kipling and 26th Avenue will be helpful on both fronts since Kipling connects the brewery to a lot of nearby apartment buildings.

He also stresses that although Live Slow will serve elevated bowling alley food, "This is not a sit-down place. We are a brewery with food. The entertainment and beer is what we will push."

And while Malouff and Simons will handle day-to-day activities, Babb says he will work behind the scenes, since his primary responsibilities are still with Joyride, which he founded in 2014 with Dave Bergen.

The three hope that demolition will begin in April and that they can open in October.
KEEP WESTWORD FREE... Since we started Westword, it has been defined as the free, independent voice of Denver, and we'd like to keep it that way. With local media under siege, it's more important than ever for us to rally support behind funding our local journalism. You can help by participating in our "I Support" program, allowing us to keep offering readers access to our incisive coverage of local news, food and culture with no paywalls.
Make a one-time donation today for as little as $1.