A brewer pours beer from a foeder. New Belgium Brewing
In the beginning, at the dawn of the craft-beer era in Colorado, there was free beer. And it was good. Anyone who was interested in checking out breweries like New Belgium, Odell and Great Divide could stop by, learn about the brewing process and sample the beer for free. If they liked it, they could buy a few six-packs or a bomber bottle or a growler of suds to take home.

But times change. Brewery tours have become big business, and while they're still mostly free, the beer usually isn’t. Colorado’s oldest breweries all transitioned from the free-sample system to today’s taproom model in the past four or five years as more breweries opened. The drinking public has changed, too. Its denizens are more sophisticated, they’ve been on other tours, and now they want to learn more about the brewing process.

So New Belgium Brewing, which is widely recognized as offering one of the best — if not the best — brewery tour in the business, is changing its model once again.

While you can still take a free tour of the facility and get some free samples, Colorado’s largest craft brewery — located in Fort Collins — now offers a collection of specialty tours called Craft Your Own Adventure, which come with a price tag. The tours offer what the brewery calls a “deep dive” into certain aspects of the operation. The draw here is that some of the tours are led by a brewer rather than a tour guide, and attendees can sample beers at every stage of the brewing process.

The Grain to Glass tour, for example, is a two-hour journey for $45 per person that begins in the malt house and allows attendees to taste wort (unfermented beer), fermented beer in the tanks — and then the finished product in the tasting room.Then there’s the Walk in the Woods tour, during which a brewer leads guests through the massive wooden barrels, known as foeders, where New Belgium crafts its sour ales. There they can “discover more about the history of our sours, learn what a day in the foeder forest looks like, as well as taste from our barrels," New Belgium explains. "To round out your adventure, you'll be guided through our blending process before crafting your own personal blend.” This one runs $65 a person. 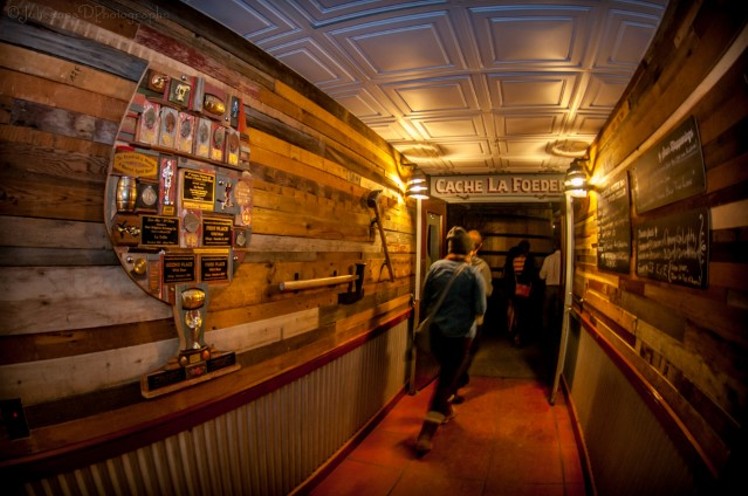 A tour group heads into the Foeder Forest at New Belgium.
New Belgium Brewing
“It’s pure beer-geek heaven,” says New Belgium spokesman Jesse Claeys, explaining that the tours were born out of the feedback the brewery received from its visitors. Some wanted private tours for a birthday party or a business retreat. Others wanted something more in-depth, or specialized and focused on their favorite aspect of what we do here at New Belgium. ... I think that once a person discovers craft beer, the natural tendency is to want to become more educated about all aspects associated with the liquid they love.”

In addition to free beer and time spent with the brewer (on two of the tours), attendees walk away with a souvenir globe glass and good memories. “For many beer lovers, the experience of tasting Fat Tire wort in the brewhouse, or grabbing a cold bottle of Citradelic off the bottling line, or mixing a custom sour-beer creation straight from our foeders is priceless,” Claeys says.

So far, most of the people who have taken the new tours are from the Front Range, but Claeys says the brewery expects a more even mix of tourists and locals in the spring and summer.

New Belgium began offering tours in 1991, when the brewery opened. Of course, back then, the only thing to see was the basement of the home where founders Kim Jordan and Jeff Lebesch made the beer. More formal tours began in 1995, when New Belgium moved into a normal production facility and expanded as the brewery grew. The company ended the practice of providing free samples to tasting-room visitors in 2014.

Claeys says he hopes in-depth tours like these catch on at other breweries, but he also points out that “it takes a special place to be able to offer such an experience. I mean, how many breweries have a Foeder Forest that people can stroll through? Or have passionate employee-owners who are willing to switch job gears and invite the public in for a close view of what they do on a day-to-day basis?”

New Belgium Brewing Company is located at 500 Linden Street, Fort Collins, and is open from 11 a.m. to 8 p.m. daily. See the New Belgium website for a complete schedule of tours and to reserve tickets. Information for private tours and the new Craft Your Own Adventure tours is available here.