Patter Gersuk created a "clean" energy bar using all these ingredients. It's called the Patterbar, and you can find it at the South Pearl Street Farmers' Market. Linnea Covington
On a recent Sunday at the South Pearl Street Farmers' Market, Patter Gersuk stood in the sun handing out samples of her Patterbar, an energy bar boasting what she describes as simple, clean and good ingredients. The little squares of brown food appeared uninspiring, but the flavor proved anything but.

"I love when I get those people who don't like health food and they say it tastes good," Gersuk says.
"There's no added sugar, and it's gratifying to give people something that tastes good that they really like."

Gersuk officially started Patterbar this past March, a passion project stemming from her own dedication to serving whole foods to her family. The idea, she says, is to get energy from natural ingredients, not weird additives that many "health" bars contain.

Patterbar is a new energy bar made in Denver.
Patterbar
"So many products out there have concentrated versions of elements of food that people have decided are good for you," she notes, using examples such as dates and blueberries. "They concentrate it and then add it back into your food, but it's a lab compound, and you don't get that fiber you would get from the whole food." 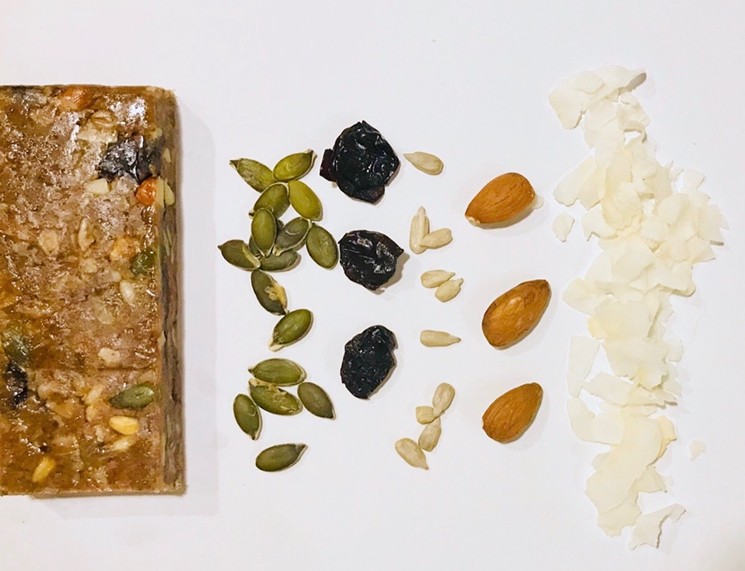 The ingredients in the fruit-and-nut Patterbar.
Patterbar
"People think more is better, but in truth you have to have the whole food to get all the benefits of it," she says. "At least that's how I have always believed it to work, and it's the most old-fashioned thing."

This dedication to whole foods started when Gersuk was making meals and snacks for her three kids. This was decades ago, and she had trouble finding store-bought goods that didn't have added sugar or chemical ingredients, so she started making them herself. Over the years Gersuk continued to whip up wholesome foods and even taught classes at Williams-Sonoma and was an educator for the staff at Whole Foods. She and her husband have moved all around the country because of his globe-trotting job, but she has called Denver home since 2015 to be closer to her daughters.

"I think food can taste good and it's not hard; it's very simple," says Gersuk. "It's really gratifying to me to have people around that want something that's real food." "It was founded on this belief that people deserved something better in sweet snacking, particularly in the cookie aisle," says Taylor Harrell, the Sejoyia marketing director. "The idea is to deliver something to the cookie aisle that didn’t give you a sugar crash or was filled with junk; it's not an Oreo made with organic ingredients, but something mindfully made." Sejoyia Coco-Roons are made in Louisville.
Sejoyia
In this case, mindfully made adds up to nothing more than coconut, cashews, coconut sugar, sea salt and flour created from cassava, a root vegetable found in Latin American, Asia and Africa that's gluten-, grain- and nut-free. The soft, macaroon-like cookie bites come in flavors such as salted caramel, lemon pie, maple vanilla and chocolate chip. The newly launched crispy Coco-Thins come in vanilla, chocolate, lemon and salted caramel. All of the cookies are vegan, kosher, non-GMO certified, gluten-free and paleo-friendly. Sejoyia salted caramel Coco-Roons.
Sejoyia
Sejoyia started in California in 2006, but moved operations to Louisville and Boulder in 2016. The idea, says Harrell, was that Boulder represented the values the company favored, and now all production is done in or around the area using local companies such as ePac Flexible Packaging and Freelo Design.

"There's so much here, and it's such a vibrant community for natural foods," says Harrell, adding that although Cheney still lives in California, she visits Boulder often to oversee production and design. "We're really trying to understand what people want out of their sweet snacking and coconut cookies, and how we can innovate and create new products that are aligned with the brand and what we stand for."

You can find Sejoyia at many Safeway, Whole Foods and King Soopers grocery stores around Denver and Boulder, or order them from the Sejoyia website. You can purchase Patterbars at the South Pearl Street Farmers' Market on Sundays from 9 a.m. to 1 p.m. until November 18; or order them from the company's online shop.
KEEP WESTWORD FREE... Since we started Westword, it has been defined as the free, independent voice of Denver, and we'd like to keep it that way. With local media under siege, it's more important than ever for us to rally support behind funding our local journalism. You can help by participating in our "I Support" program, allowing us to keep offering readers access to our incisive coverage of local news, food and culture with no paywalls.
Make a one-time donation today for as little as $1.