Renegade Brewing opened in 2011. Jonathan Shikes
Renegade Brewing, which was founded in 2011 amid a wave of new taprooms, has sold a large stake of its business to an investment company called Silver Fox Partners, run by former Xerox CEO Ann Mulcahy. The change will allow the brewery to expand its barrel-aged beers offerings, add to its staff and increase its sales and marketing presence in Colorado and the four other states where its beer is sold.

“I want to be able to be competitive in a competitive space,” O’Connell explains. “I started this company with very little money, with just friends and family investing. “I have bootstrapped and reinvested to get to this point, and it was working — we are growing. I could have kept going this way, but it would have been a slower pace, and I feel like I owed it to my employees and to my original round of investors to make us as competitive and successful as we can be.

“A brewery can successfully operate as a small company. I did it for a long time,” he continues. “You brew beer and run the taproom and go to beer festivals and pay the bills. But for me, that wasn’t a sustainable way to keep my business going. It asks a lot of the operator to be wearing all those hats. I’ve had my eyes set on growth for a long time.”

Renegade will produce 6,000 barrels of beer in 2017 between its original taproom and brewery at 925 West Ninth Avenue in the Art District on Santa Fe and its large production facility at 913 West First Avenue. O'Connell hopes to brew about 8,500 barrels in 2018. One of his goals is to increase the brewery’s barrel-aged offerings (including packaged beers) and to add a line of sour and wild ales. 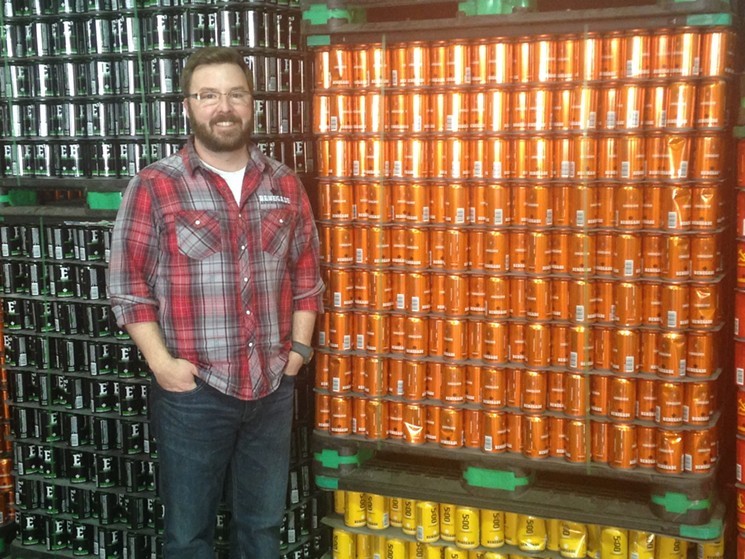 Brian O'Connell will continue to run Renegade Brewing.
Jonathan Shikes
O’Connell says he currently has ten full-time staffers and another twelve part-timers. He will be hiring four new full-time employees immediately, three of whom will work in sales and marketing, helping the brewery to increase its presence in Colorado, Arizona, Kansas, Wisconsin and Ohio, where Renegade sells a full lineup of canned beers.

Renegade is the first company in which Silver Fox has invested since Mulcahy launched it earlier this year. Mulcahy rose through the ranks at Xerox over a 25-year period, becoming CEO in 2001 and chairman of the board in 2002 before retiring in 2009. She has also served on the boards of Citigroup and Target.

Consumers have been paying more and more attention to who owns craft breweries over the past five years, as many beer makers — along with the Boulder-based Brewers association, which represents craft breweries nationwide — have sought to distinguish themselves from “big beer” companies like Anheuser Busch InBev, MillerCoors, Heineken and Constellation Brands.

In order to stay competitive with their fellow craft breweries, however, many formerly independent companies have sold all or parts of their ownership in return for cash infusions. Some, like Longmont-based Oksar Blues, went with private equity firms. Others, like Funkwerks in Fort Collins, have sold ownership stakes to other breweries — in that case, Brooklyn Brewery.

Those purchases have been controversial, because the BA no longer considers breweries owned by big beer to be independent craft breweries. Private investments, however, don’t disqualify a brewery.

“Independent means you are not owned by a larger macro brewery,” says O'Connell, who has always made a point of fighting for brewery independence. “Yes, this is an investment, but Renegade has had investors from day one. We are not structured any differently than we have ever been structured. We remain independent.”

O’Connell says Silver Fox isn’t looking for short-term financial return, nor does it have a timeline: “They are looking for businesses that they believe in and that they plan to hold on to for a long time.” As far as he knows, Silver Fox doesn’t plan to buy into any other breweries.

From now on, company decisions will be made by O’Connell and Mulcahy. “She is a really, really impressive person,” he says. “I am super-excited to have access to her and her experience, and to be able to ask questions on leadership.”