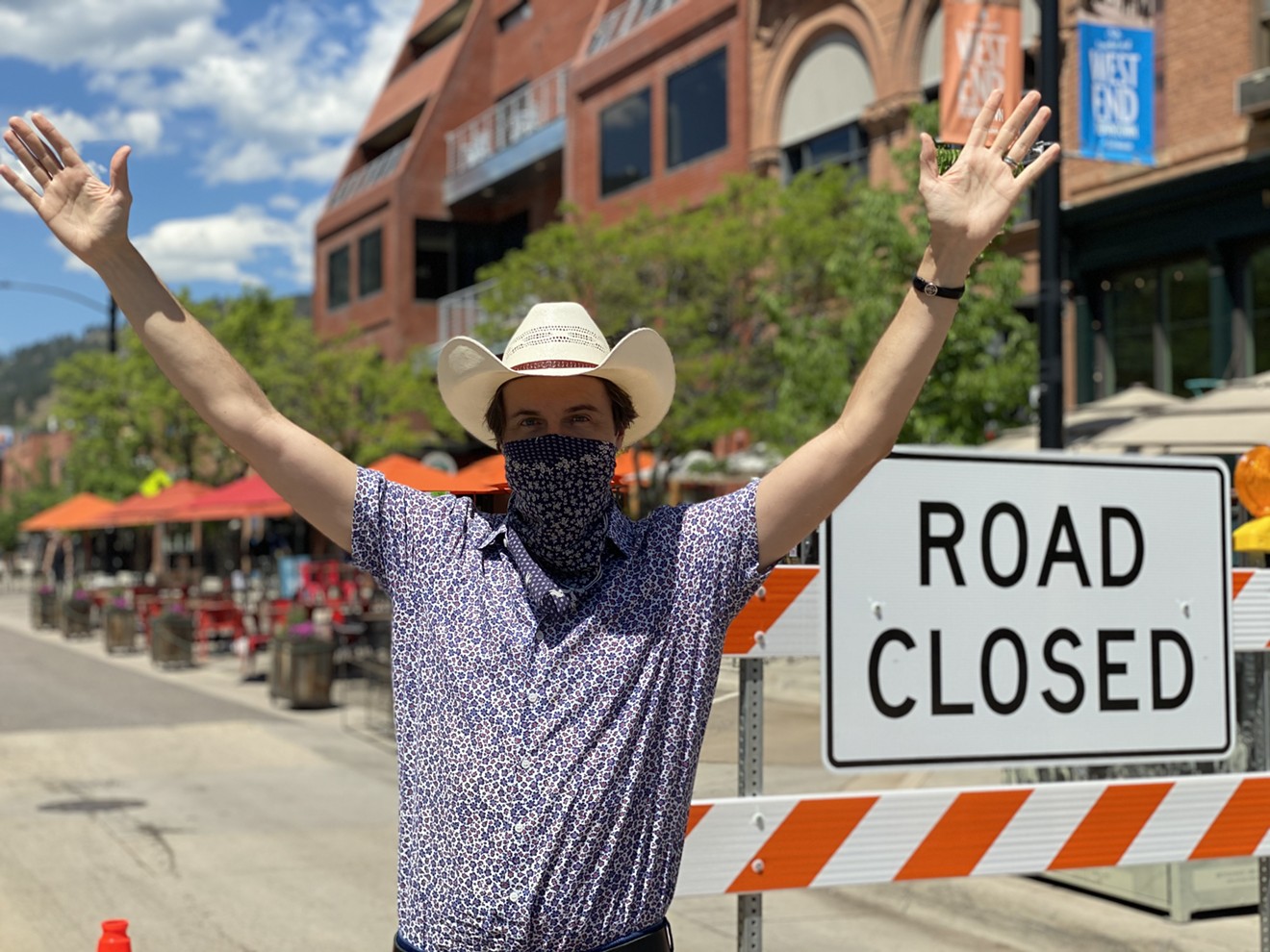 Restaurateur Kimbal Musk celebrates the temporary closing of Pearl Street and the reopening of the Kitchen and the Kitchen Next Door. Courtesy of the Kitchen Restaurant Group
Restaurateur Kimbal Musk took some time between the scrubbed launch of his brother Elon's first manned SpaceX flight on May 27 and the redo three days later to return from Florida to Boulder to help with another kind of relaunch: the reopening of several of his Colorado restaurants that have been closed or operating for takeout- only since the March 17 coronavirus closures.

On the intervening Friday, Musk was out on the patio of the Kitchen American Bistro — the farm-to-table eatery he opened in Boulder in 2004 with business partner Hugo Matheson — greeting customers on a newly expanded outdoor seating area. It was the first day that any of his restaurants (which include two other Kitchen Bistros, the Kitchen Upstairs and multiple Next Door American Eateries) were open again to dine-in guests; the closure of the west end of Pearl Street to vehicle traffic had made the outdoor expansion possible. Musk had lobbied Boulder officials for the street closing as a way to help spread out customers for safe dining in public, and he'd also been working with Governor Jared Polis to shape regulations around restaurant reopenings as customers begin to emerge from weeks of stay-at-home and safer-at-home orders.

"I was working with [the governor] and working with restaurants in other states and countries that have reopened successfully," Musk explains. "I was asking the question 'How do we reopen safely — not just for customers, but for staff?'"

Musk made sure to let customers know about the new ordering and payment app.
Courtesy of the Kitchen Restaurant Group
Most restaurant owners recognized that they'd be reopening with only partial capacity, but the question was just what percentage would be safe while still allowing eateries to make money. "Jared is a very data-driven person, and he asked me to gather a consensus of restaurateurs' opinions," Musk notes. "We called it a 'well-reasoned' opening plan."

Musk's conversations with other restaurateurs and his research into other cities that had already begun to reopen suggested that the magic number was 50 percent. "There hasn't been a single example of the disease coming from a restaurant open at 50 percent," he explains. "We can't survive at 50 percent, but we can get through, knowing that it's only temporary."

The recommendation stuck, and on May 25 Polis announced that restaurants could begin reopening at half capacity on May 27, as long as they followed a slew of other other guidelines and restrictions that his office had outlined the day before.

Musk knew that operating half-empty restaurants would require operational changes, so he had his own team implement simplified menus that could be executed with smaller kitchen crews and would waste less food. He also came up with an app for customers that would allow them to order and pay using their iPhones or Android devices, limiting interaction with waitstaff while dining at their own pace. "Now the power is in the guests' hands," Musk says.

Pearl Street west of the pedestrian mall has been closed to motor vehicles to allow restaurants to expand their outdoor seating.
Courtesy of the Kitchen Restaurant Group
Musk is no stranger to technology. In the mid-1990s he founded Zip2, which was eventually purchased for $305 million by Compaq. While his brother Elon became famous for Tesla and SpaceX (among other companies), Kimbal Musk pursued his passion for food and sustainability through restaurants and food-based nonprofit organizations, including Big Green, which builds educational gardens at schools all over the country.

Musk used his own tech skills to design the new restaurant app, then recruited a group of engineers to finish it. "It's taken about three months, and we're using it right away," he says. The app ties in with a restaurant's POS system so that customers can order more rounds of drinks or dessert after dinner, and the ticket goes straight to the kitchen or bartender. Since hospitality is still the primary goal of a restaurant, he notes that servers will continue to add a human element to the dining experience.

While some of his restaurants' employees who were laid off in the middle of March will be returning, Musk says that it will be some time before he can fully restaff. In the meantime, his management team has been checking with all current and former employees to make sure they're stable. Shortly after the layoffs, there was concern that an $11,000 emergency fund fueled by employee contributions was not being used to help out-of-work staff, but Musk explains that the fund, administered by a registered nonprofit organization, was set up to assist active employees, and IRS regulations prevented him from using the money in other ways.

"I felt bad about it, but I also wanted to follow the rules, because we're dealing with the IRS," he points out. After checking with ways of reallocating the fund, he was eventually able to have the money reclassified under the rules and distributed as disaster relief, he says.

Even masked, Kimbal Musk is recognizable because of his straw cowboy hat.
Courtesy of the Kitchen Restaurant Group
For those returning to the Kitchen and Next Door restaurant groups — both as employees and diners — Musk wants safety to be the top priority. But that's always been a top priority in the restaurant industry, he notes; following rigorous cleaning and food-handling practices has been part of the business for a long time.

"It's safer to eat at a restaurant than it is to drive to one," he declares. "We hope that people come out carefully and are thoughtful. It's going to be good and fun, and we'll all get through this together."

The latest word from the restaurant group is that Next Door Eatery in Fort Collins will open today (Tuesday, June 2), followed by the Stapleton outpost on Thursday, and the Longmont and Westminster locations the week of June 8. Next Door Eatery at Union Station will remain closed until this week's curfews (put in place by the City of Denver after the George Floyd protests) are lifted. The Kitchen in Denver will remain closed until mid-late June as we determine the right reopening timeline for that location.
KEEP WESTWORD FREE... Since we started Westword, it has been defined as the free, independent voice of Denver, and we'd like to keep it that way. With local media under siege, it's more important than ever for us to rally support behind funding our local journalism. You can help by participating in our "I Support" program, allowing us to keep offering readers access to our incisive coverage of local news, food and culture with no paywalls.
Make a one-time donation today for as little as $1.