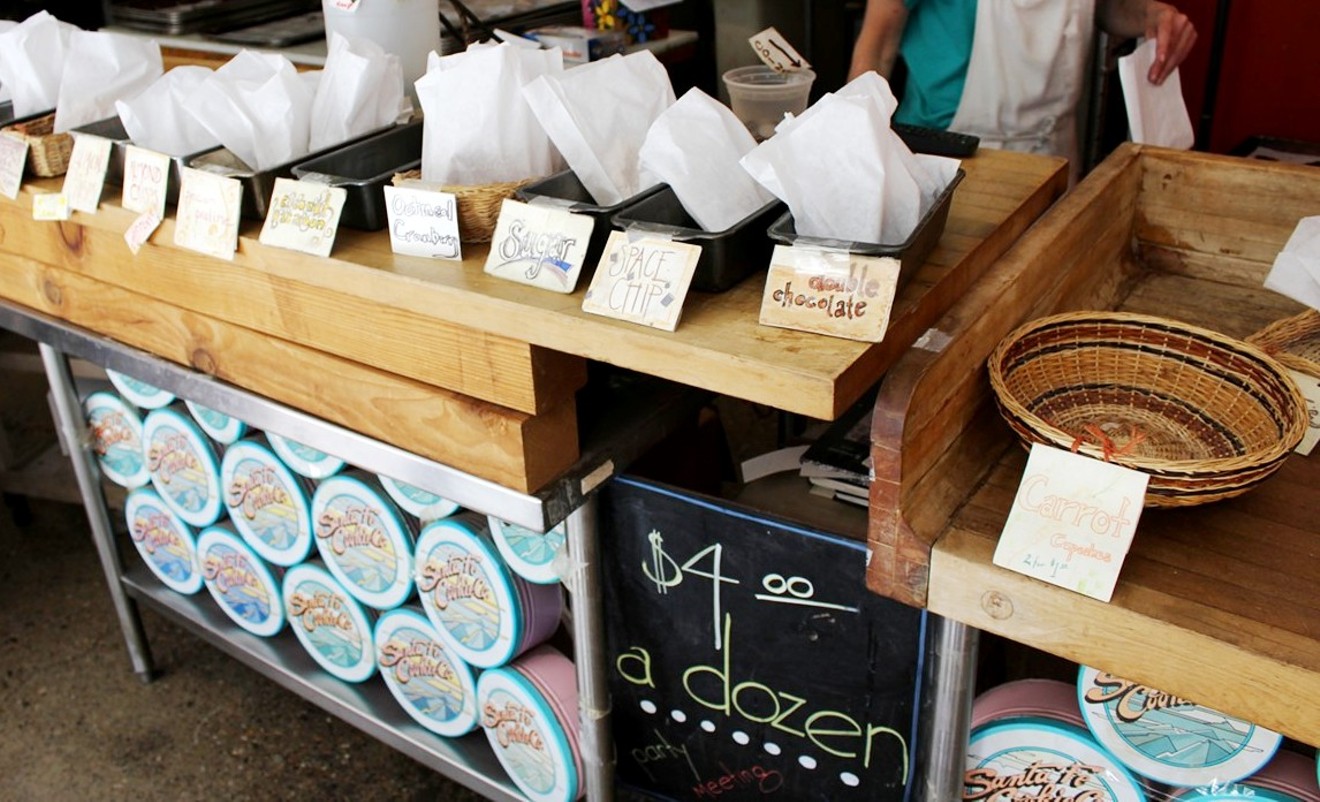 Grab a bag and drop your money in the jar — that's how the Santa Fe Cookie Co. does business. Westword
Denver lost a treasure when Debbie Kuehn, known to many as "the Cookie Lady," passed away in June after a battle with cancer. Kuehn ran the popular Santa Fe Cookie Co. at 303 16th Street downtown, offering fresh-baked cookies with an honor-system payment method that felt like a slice of small-town America despite the urban setting.

Kuehn kept her bakery running for as long as possible; after she died, her niece Alexis McLean opened the shop on Republic Plaza on July 17 for what she thought would be one last tribute to her aunt. The sales of cookies that day went toward local nonprofit organizations, and faithful fans of the Cookie Lady were given a final taste of their favorite treats — at least, they thought it was the final taste.

McLean realized she couldn't just let the Santa Fe Cookie Co. slip away, though, so she's ready to reopen the little bakery on Monday, October 2, to return honor-system cookies and other baked goods to the 16th Street Mall.

Keuhn founded the Santa Fe Cookie Co. on the Auraria campus in the late 1980s before setting up shop in the alley behind Duffy's Shamrock at 1635 Court Street (the building still stands, but the restaurant closed years ago). In 2008, she moved the bakery to the current location.

McLean has watched the bakery evolve since she was a little girl — she was putting fork prints on the peanut butter cookies when she was nine years old, she says — and starting helping her aunt regularly during summers when she was back from college.

McLean's main profession is as an artist; she created the original murals and signs at the Santa Fe Cookie Co. But she also learned how to bake from her aunt and had a close relationship with her, even living with her for a time and pet-sitting and running the bakery when Kuehn went on vacation. When Kuehn was sharing her recipes, McLean recalls, she would say, "You can't be an artist right now; you have to be a scientist."

So taking over the bakery was not an easy choice. "I made the decision at the beginning of this month — after all the grief and everything we have been through," McLean explains. And although she wants to honor her aunt and keep her memories and recipes alive, she realized that she'll need to make some changes when she runs the company. "My aunt was totally awesome," she says, "but I had to decide to do this for my own reasons."

Two things that won't change are the recipes and the self-service system. The Santa Fe Cookie Co. will reopen with a dozen of Kuehn's regular cookies and other baked goods, and McLean will add a few of her own recipes, along with drip coffee (also on the honor system) on October 19, when the shop will hold its official grand opening. At that time, she'll also start some monthly specials based on her aunt's recipes for coffee, scones and other treats.

Already, McLean has noticed people peering through the windows and banging on the door as she preps the shop for reopening, so she knows the original customer base is ready for cookies. But she also loves seeing new customers experience the honor-system setup. "It's really neat seeing people come in for the first time," she says. "There's surprise; there's excitement. People's faces really light up.

"Debbie used to say that when people are trusted, they end up being trustworthy," she adds. "It's part of what she wanted to put out there into the world."

Trust and good cookies: a potent combination. You'll be able to experience both from 10 a.m. to 3 p.m. Monday through Friday beginning October 2.