Anna Lockhart visited the photo booth at Crow Bar. Jake Browne
I’m listening to two guys discuss carburetors five seats down while Three Dog Night’s “Joy to the World” plays over speakers old enough to vote. A guy I hadn’t seen in years just finished his pre-shift beer before heading to his newest bartending gig. He’s asked me to preserve his anonymity — as if that wasn’t the code here at Crow Bar (4395 Yates Street).

I’m here for my first interview in a series in which bartenders take me to their favorite place to grab a drink, and my second Pabst Blue Ribbon isn’t calming my nerves. My buddy and bar manager for Mead St. Provisions, Anna Lockhart, is here wearing a knee-length black faux-fur jacket that reminds me of my rave days. We have a big Midwestern hug, and she orders a double Tito's and soda, tall, with two lemons (one for each Tito's, I assume) and a shot of Jameson.

I ask if we can sit at the bar. “I’m the kind of asshole that will go to a bar, and if there are no bar seats, I'll go to a different bar,” she says. It’s settled.

Lockhart, for the record, is the only person who would call her an asshole. She has not so quietly amassed a dedicated cult following by being the biggest personality in the room at Mead St., the live-music institution turned upscale bodega in Highlands Square. None of this comports with my mid-aughts bar training, which ingrained in me that customers came in to complain about problems or weasel comp drinks out of you. They were the enemy. Jake Browne
“That’s what I like about bartending. It’s about making friends,” she says, contrary to all the bitterness I let loose. “I can read when someone doesn’t want to be my friend, and I fully respect that. But everybody else will be my best friend before they leave. I will force it onto them,” she says with a devious laugh. I toast to that with the mystery shot I rolled a six on. It’s Malibu, which is to say it’s disappointing.

All of this feels rooted in small-town geniality. Lockhart grew up in Worland, Wyoming, where there’s a stoplight for every thousand people and the local watering hole has a picture of a Budweiser and a Pall Mall for its thumbnail on Google. She moved to Laramie to “learn how to drink,” dropped out of cosmetology school thirty seconds later, and started pouring beers and shots in Rawlins.

“It was strictly oil-field workers and townies,” she says of the clientele at the bar she can’t even remember the name of but remembers that it was open from 6 a.m. until 2 a.m. “[For oil-field workers], it was two weeks on, one week off, and they’d start drinking the moment they got off. Dealing with someone who’s blackout drunk at 9 a.m. sucks. They’d sleep it off for six hours and come back.”

It was a pressure cooker full of guys with more money than they knew what to do with, recreational drug habits, and a biting rural loneliness that you drink to bury. “There was always a security guard with me,” she says. “Once they get drunk, you never know what will happen. They might fight with each other. They might fight with me. Here, someone’s like, ‘I’m so sorry, but can I please get one more shot?’”

"Here" is a home she carved out for herself in Highland when, after the unexpected passing of her boyfriend, Mead St. owner Paul Burke offered her a bartending gig to help her get back on her feet following a month off of work. Lockhart refers to him as her “work husband,” but there’s also something hagiographical about how she describes him. After all, her experience had been turning bottles upside down and pulling tap handles. Jake Browne
“I started buying books about mixology, and he started sending me to off-premises events to learn about cocktails,” she says. “Paul will go to taste things and be like, ‘This is really cool. What can we use this for?’ And it’s some Italian syrup ginger, and I have to figure it out.”

On occasion, he also drops into Crow Bar, an oasis established in 1966 on the border of Berkeley and Mountain View. Looking east, you see the creeping shadows of apartment buildings, condos and inevitability lurching toward the dive formerly known as the Rosa Mia Inn. The cozy front room gives off eccentric-grandma vibes, with pothos vines and kitschy crow “art” in mismatched frames adorning the walls, while the back is all dorm-core, with a Super Nintendo and an old Austin Powers pinball machine that loves to ask, “Do I make you randy?”

Jamie is behind the bar this afternoon, and she has us entirely buzzed an hour in, with Lockhart sticking to her Tito's and me gambling (and losing) on another mystery shot that was the pale green of Apple Pucker and regrets. A recently boothed three-top looks like they just clocked out. My puppy greets them by jumping right on one of the guys' balls, and almost everyone has a good laugh.

“Every time I come here, I meet a new tattooed person that becomes my best friend, and we never talk again,” Lockhart says with her uproarious laugh. “If you love this place, the people here love you.” She found Crow Bar through a time-honored tradition of supporting those who support you. “[Crow Bar owners] Claire and Damien would come in, recognize how busy we are, and buy shots for the entire staff when they got off.”

Claire is at the end of the bar on her laptop. I assume she’s doing small-business things like “running the numbers” or placing orders, but she stops to give Lockhart a homemade toaster strudel before quickly dodging any attempt to be photographed, quoted or generally involved. I love it. Lockhart takes a huge bite and, without a pause, holds it out so I can have one, too. This afternoon we’re best friends.

Crow Bar is located at 4395 Yates Street and is open from 2 p.m. to 2 a.m. Monday through Thursday and noon to 2 a.m. Friday through Sunday. For more information, visit facebook.com/crowbardenver.

What makes a good dive bar?
People who recognize you but put up with no bullshit.

Best thing to have on a bar TV?
Jeopardy or Harry Potter

Why do you bartend?
Because I love it.
KEEP WESTWORD FREE... Since we started Westword, it has been defined as the free, independent voice of Denver, and we'd like to keep it that way. With local media under siege, it's more important than ever for us to rally support behind funding our local journalism. You can help by participating in our "I Support" program, allowing us to keep offering readers access to our incisive coverage of local news, food and culture with no paywalls.
Make a one-time donation today for as little as $1. 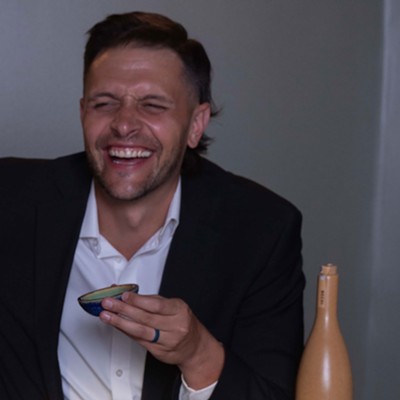