Sophie and Hosea Rosenberg enjoy summer treats from Gelato Boy. Lauren Feder Rosenberg
Life for a married couple in the restaurant business is tough enough right now, with the stress of having to run a business safely for customers and employees while dealing with reduced revenue from COVID-related restrictions. But Hosea Rosenberg and Lauren Feder Rosenberg were dealt a second blow this past spring after learning that their daughter, Sophie, has a rare genetic disorder that has been found in only thirty other people in the world.

Hosea Rosenberg is the founder of Blackbelly, Blackbelly Butcher and Santo in Boulder, and Lauren handles public relations for the restaurants. Sophie, now three years old, began showing symptoms of what was originally diagnosed as arthritis when she was having difficulty learning how to walk. But she was up and walking before she turned two, thanks to physical therapy, foot-ankle braces and anti-inflammatory medication.

Still, other symptoms kept the couple from searching for answers, which they found after a year-long wait for an extensive genetic test and another two months waiting for results. The diagnosis, which came on March 9, was Multicentric Carpotarsal Osteolysis (MCTO) Syndrome, which causes degeneration of the wrist and foot bones as well as kidney problems that have led to renal failure in others with the illness.

Since then, Lauren has set up Sophie's Neighborhood, a nonprofit organization created to fund research for the couple's daughter and others living with MCTO. Since the disease is so rare, all the money is going toward clinical studies and the development of treatments and possibly even a cure. "It's been like starting up a new business in the middle of the pandemic," Lauren explains, noting that she and Hosea have also been scheduling trips to St. Louis to meet with a team of doctors and to Sydney, Australia, where the Garvan Institute of Medical Research is one of the few places in the world working on treatments for MCTO. 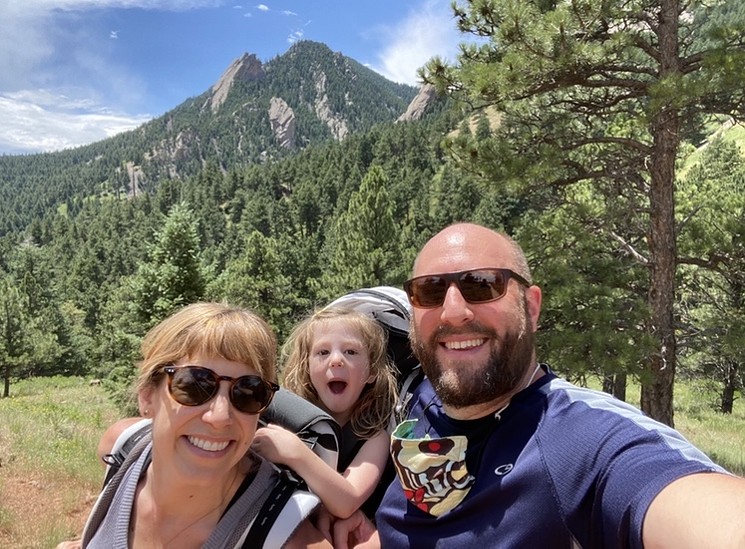 Lauren Feder Rosenberg and Hosea Rosenberg with their daughter, Sophie.
Lauren Feder Rosenberg
In the meantime, there are still restaurants to run, so Hosea has adjusted his schedule to spend more mornings at Blackbelly and Santo so that the family can have dinners together. "It's been very surreal," the chef notes. "We wake up every morning and the reality hits you. But you have to shake off the sadness and get to work."

Despite the restaurant industry's current woes, Hosea says business has picked up enough "to where we're surviving," and there's the bonus of being in an industry known for its community support.

That's one of the reasons that the first Sophie's Neighborhood fundraiser, a silent auction held on May 30 (Sophie's birthday), was such a success. "So many people wanted to donate items that I couldn't get them all in the first auction," Lauren points out. So a second auction is planned for August 15, and there are other fundraisers coming before then.

Then on July 26, Cookies4Sophie, an advance-order bake sale organized by ten-year-old philanthropist Dana Parella, will kick off. To participate, donate on the Cookies4Sophie GoFundMe page, then pick up your cookies at Santo (1265 Alpine Street, Boulder) between 10 a.m. and 1 p.m. on July 26. Future pick-up dates will be announced for those who donate after July 23.

The August silent auction will feature food and restaurant prizes, but also art, vacation packages, and virtual experiences with chefs and musicians. Details for all the fundraisers can be found on the Sophie's Neighborhood website.

Lauren says the overall goal is to raise $2 million for the foundation this year — and to be present for their daughter, who she says is very mobile, pain-free and happy right now.
KEEP WESTWORD FREE... Since we started Westword, it has been defined as the free, independent voice of Denver, and we'd like to keep it that way. With local media under siege, it's more important than ever for us to rally support behind funding our local journalism. You can help by participating in our "I Support" program, allowing us to keep offering readers access to our incisive coverage of local news, food and culture with no paywalls.
Make a one-time donation today for as little as $1.