Batch 21 of Snowflake, Stranahan's yearly special release. Stranahan's Single Malt Whiskey
Just as each snowflake is unique, so is each batch of Stranahan's Snowflake, a limited-edition spirit blended with whiskey from several different casks that will be released Saturday, December 1, at 8 a.m.

The line has already started forming at the distillery at 200 South Kalamath Street to score the two-bottle maximum per person. The first fan, says Snowflake mastermind and Stranahan's master distiller Rob Dietrich, showed up last Saturday (November 24). The craze for this rare whiskey started in 2007 when the distillery's then-owner, Jess Graber, thought up the project. In 2010, after Graber sold the business, Dietrich took over Snowflake's production, and each year it has gotten more intense as his whiskey experiments grow. We caught up with Dietrich as he got ready for the big release and talked to him about what makes Snowflake so popular and how it's evolved over the past decade.

Rob Dietrich: It started with Jess Graber, who was our original founder. Jess is my mentor and someone I love and respect. He taught me how to distill, and in the beginning we always set out to make one whiskey and make it well. That was the original. When we started experimenting, we wanted to know how to get innovative with cask finishing. He mastered cask finishing in a wine barrel. He would release one wine barrel at a time, and later I came up with the idea of combining cask-finished whiskeys with each other.

The first three Snowflakes were released at the same time. It was before it was a phenomenon. Then, when Jess sold the company in 2010, that's where I took over and started making Snowflake myself. That's when I started taking barrels I already had and created an unusual flavor profile between a Hungarian oak and Madeira cask-finished whiskey.

People started lining up, and it sold out the release day. Now I am literally looking out the window [on Wednesday, November 28], and there are people lining up. It's nuts. 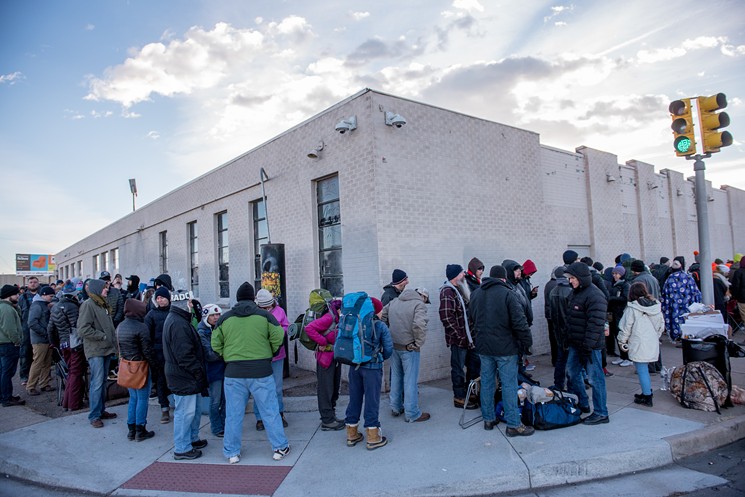 "Stranafans" waiting in line last year.
Jake Cox
When does the crowd start coming in?
The first guy got on line last Saturday, seven full days before the release. This guy always wants bottle number one [each bottle is numbered], and he has competition. He comes from Grand Junction. The other guys vying for that position, they come from Wisconsin. They have a kitchen and a smoker, and they're locked for the week.

I stay up all night the night of the release and walk the line, sip some whiskey with folks, chat, hang out and get them excited. This is whiskey tailgating for a week in advance just to get a couple bottles, and that's why every morning I go out and say hello. It's all very flattering.

Why do you think the fans are so dedicated?
I think, one, it's the rarity [of the product]. We were Colorado’s first whiskey, and Snowflake has a cult following. I have a reputation where with every batch I try to out-Snowflake the last Snowflake. It's something unique that's different than any other release.

Also, we always do something special for the first ten people in line, like a gift with a number. In the past we had one-gallon whiskey barrels made with a one-to-ten number and I signed them. It's to reward their tenacity and adventurous spirit, and reward them for being part of the whiskey adventure.

How do you go about creating Snowflake?
I pull a sample from thirty to forty cask-finished whiskeys and then narrow them down to a nine-barrel batch. I am busy nosing and tasting all these samples and deciding what will be a spectacular blend of all those finishes.

A bottle of Stranahan's limited-edition Snowflake Whiskey from 2017.
Jake Cox
It sounds like a lot of fun!
A lot people ask me if I need some help, but this is where I get to be a little selfish and do some whiskey art. I do something completely different every year. It takes a couple months, and my kitchen table turns into a mad scientist's lab. I focus on the nose and taste. I put on some vinyl and concentrate on what the whiskey is telling me to do.

What special about this year's Snowflake?
This year I used nine different cask finishes. I used a syrah cask, muscat and port, and all these came locally from the Balistreri winery. I got them really fresh and put whiskey in the same day the wine was taken out. I also used a chocolate-stout barrel from Breckenridge Brewery, which was actually first aged in our used whiskey barrel, then given back to us a couple years ago after the beer was gone. Then there's a California merlot by Spero Winery, also a local winery, and their old vine zinfandel, too. Finally, there's two Madeira wine casks and a rum cask.

How would you describe the flavor?
It's kind of crazy — there was this chocolate note that was resounding through it. Once I get on a flavor profile, I start to chase it. I'm not a musician, but I have heard musicians describing notes as color, and I started seeing whiskey notes as color. There was this silky, milk-chocolate thing that I was going to run with. I could start seeing this flavor river, and I was running down it. Again, I'm getting nerdy, but it's the way I see whiskey. I see it as a color, and the flavors kind of tie in.

Some early notes include some oaky flavors and baked yam — that was another one. Have you ever had a baked yam with butter? That's one of the flavor profiles I was getting out of it. Also black walnut, and I am not a huge walnut fan. But in the right setting, it has a good spark of flavor. That's the fun thing about identifying whiskey: You pull off the palate of your memory. Everyone's palate is their own, and it's about the foods you ate and what your grandma would cook for you. I lived all over the world, and I have a lot of food experiences, and I pull from those.

"Stranafans" waiting in line for the 2017 batch 20 of Snowflake.
Jake Cox
How did you narrow down all those casks into just nine?
It was crazy. There's something when I was kid called a "suicide cup," where you hit all the buttons on a soda machine and get all sorts of sodas in the cup. It's a sugar bomb. What I am trying to do is not that, I'm trying to create something that's completely unique; each individual barrel executes that.

What do you do with all the reject Snowflakes?
All those samples I get to hang on to and drink throughout the year. Some of the whiskey we keep in the barrels, and they might be cask finishing another year. I have some cask finishes that I have been working on for one, two, three years, and some just six months. This way I can see what another year is going to do to change that barrel.

Folk heading into Stranahan's distillery to get a bottle of Snowflake in 2017.
Stranahan's Single Malt Whiskey
Why don't you charge more to keep the crowds at bay?
It costs $100, and we could get pompous and sell for $300 a bottle. But I believe in making it accessible to anyone who has the Colorado spirit of camping outside. So that's why I keep it at $100.

We used to release Snowflake two times a year, in spring and winter. Then we thought to narrow it down to one time a year, the time when Snowflake represents real snowflakes. So about three years ago we narrowed it down to the first Saturday in December of every year, just in time for Christmas.

How many bottles of Snowflake are now available?
In the first years there were only 250 bottles of Snowflake. Now, this year, I made 2,100, and we will release 1,600 to the general public. We are keeping some bottles in the cocktail lounge so people can come in and try the Snowflake, and maybe they will get it their mind to come out next year to try to get some bottles.

Any batches that stand out to you?
Every year people ask me if it's my favorite, and it's hard to compare. The Snowflake name is the expression, and a fourteener peak is the other name. Last year was Quandary Peak, and I love the name Quandary. That was such a great flavor profile. That was really my favorite, and I had to figure out how to outdo last year. I wanted to go a different direction entirely.

This year is Mount Elbert, the highest peak in Colorado. Being a Colorado native, and growing up in Southern Colorado, there are a lot of fourteeners down there, so it's a passionate connection. Of course, this year is my favorite, but I haven't tasted it against the others. Right now I am just reveling in this year's Snowflake.
KEEP WESTWORD FREE... Since we started Westword, it has been defined as the free, independent voice of Denver, and we'd like to keep it that way. With local media under siege, it's more important than ever for us to rally support behind funding our local journalism. You can help by participating in our "I Support" program, allowing us to keep offering readers access to our incisive coverage of local news, food and culture with no paywalls.
Make a one-time donation today for as little as $1.