Osaka's vegetarian green curry ramen will soon be available at three Sushi-Rama locations. Osaka Ramen
Some days are sushi days; others are perfect for ramen. Chef/restaurateur Jeff Osaka has been giving RiNo residents and visitors a choice for the past five years, with Sushi-Rama's original location at 2615 Larimer Street and Osaka Ramen's underground kitchen just a block away at 2611 Walnut Street. Since the two restaurants opened serving two distinct styles of Japanese cuisine, Osaka has added three more Sushi-Rama outposts around metro Denver.

Now the chef is combining the two concepts at his Fitzsimons, Lone Tree and DTC sushi bars, adding a menu of ramen and Japanese small plates to the existing conveyor-belt sushi menu. The idea, he says, is to give customers at those locations the same choices that downtown diners already have, especially with current COVID-based restrictions limiting orders to takeout and delivery almost exclusively. "We'll have about 90 percent of the Osaka Ramen menu at those locations," Osaka explains, "and we've been working on improving our to-go ramen setup." 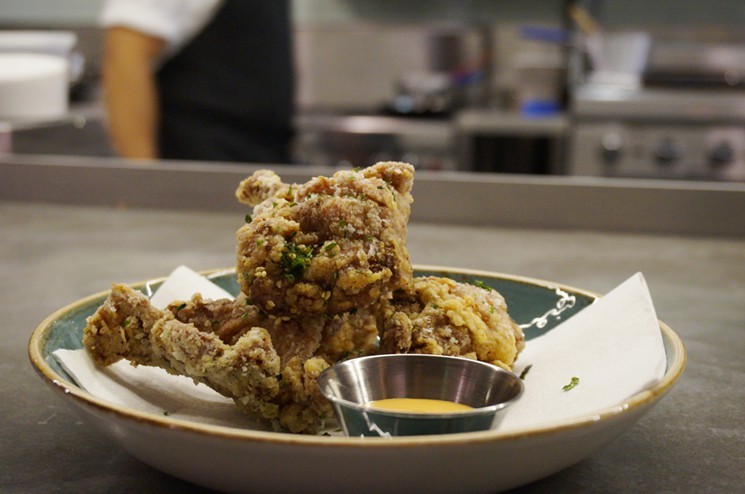 Even if you're ordering sushi, make sure and get an order of Osaka Ramen's karaage, too.
Mark Antonation
In addition to ramen bowls made with a chicken-based or vegetarian broth, Osaka Ramen favorites like the spicy green beans, bacon fried rice and karaage (Japanese fried chicken) will be offered. Some dishes won't make the jump, including ones too similar to items already offered by Sushi-Rama, or some that can't be replicated in the existing kitchens.

Osaka says he's already begun cross-training staff and testing dishes at the suburban sushi bars, and he'll be ready to roll out the new menus — as well as a few enhancements to the decor at each store — in the next month or so. The change will also help his employees during the current Level Red restrictions, which prohibit in-house dining. "We'll be open from 11 a.m. to 8 p.m. for now, and I'm trying not to lay anyone off," the chef adds.

During the first round of restaurant dining-room shutdowns, which lasted from March 17 to May 26, Osaka closed all of his restaurants completely and waited until summer to begin reopening them. This time around, he says, the restaurants have had more time to adapt to takeout business; with the colder weather, he thinks more customers will be ordering to go. In addition to ramen packaged in a way that keeps all the ingredients at their freshest, Osaka Ramen also offers ramen kits that require a little more prep, so they're great for people with more time at home.

At one point, there were two Osaka Ramen locations; the second was in Cherry Creek North, but business never really developed there. Osaka says he's always wanted to expand the concept, and taking advantage of his existing sushi bar locations will allow him to share his ramen with a broader swath of Denver.

Look for the new menus in the coming month at the Sushi-Rama outposts at 4960 Newport Street in the Denver Tech Center, 10012 Common  Street in Lone Tree, and 13650 East Colfax Avenue in Aurora.
KEEP WESTWORD FREE... Since we started Westword, it has been defined as the free, independent voice of Denver, and we'd like to keep it that way. With local media under siege, it's more important than ever for us to rally support behind funding our local journalism. You can help by participating in our "I Support" program, allowing us to keep offering readers access to our incisive coverage of local news, food and culture with no paywalls.
Make a one-time donation today for as little as $1.