Pour yourself a cold one at Broadway Market. Danielle Lirette
The clerk behind the counter pivots the touch pad toward you, showing you a summary of the food you've just ordered and the amount you need to pay. You stick your card in the slot (or maybe just wave it over the screen), choose a tip amount and sign with your finger. Almost instantaneously, your phone buzzes and the screen lights up with a text bearing your receipt.

You've been buying lunch this way for long enough that you don't remember what it's like to hand over a crisp $20 bill fresh from the ATM or the feel of change jingling in your pocket. Counter service like this isn't new, but automated service is growing increasingly more tech-oriented, especially at Denver's food halls, where you might be ordering from multiple vendors before grabbing drinks at a separate bar. The most forward-thinking of these are driving trends in the restaurant industry, not because customers demand it, but because labor shortages and rising wages require new ways of serving guests with fewer employees.

At Broadway Market (950 Broadway), you can stop at the host station and grab an electronic fob at the beginning of your dining experience. You might want to start with a sushi roll before filling up on pizza and finishing with a sweet empanada for dessert. Just present the fob at each station and be on your way; your phone will let you know when your order is ready. You can even pour your own beer by using the fob to activate a beer line that fills your glass from the bottom; a rubber gasket keeps the liquid gold inside. Not sure if you'll like that new guava-chile sour IPA? You may not be able to track down an expert to answer your questions, but you can pour a sample and have a taste before deciding, since you're being charged by the ounce. Just don't forget to stop back at the host station to settle up before you leave.

The future of fast food is here.
Danielle Lirette
Food halls aren't the only establishments embracing technology. At Empower Field at Mile High, you can buy drinks and snacks at a bodega called Drink MKT that's almost entirely automated. Just pile your purchases onto a futuristic pad and a computer tallies your bill (although it won't mop the sweat off your brow when you see the total). A couple of attendants are there to check IDs and decant anything in glass bottles, but otherwise you're on your own. Same goes for Tenders Love and Chicken (TLC), a new vendor at the stadium this year, where you tap in your order, pay and fill your glass without ever making eye contact with another human. (Pro tip: Bring some wet wipes in case the customer in line in front of you seems particularly phlegmy.)

Fried-chicken sandwich joint Birdcall (with outposts in Five Points, the University of Denver neighborhood and the Whole Foods Market downtown) was ahead of the game when it opened its original location with a similar interface in 2017, but now the trend is spreading to sit-down restaurants. At DC Pie Co., touch pads are hidden in slots at each table, and you can order your dinner and pay without having to hand over your card to a server. Some restaurants even have apps that allow you to pre-order using your phone to cut down on your wait once you arrive. At Denver Milk Market (1800 Wazee Street), another new food hall downtown, you can select from any or all of more than a dozen food counters using the market's website, then pick up the entire order at the concierge station near the front entrance. Your next business lunch just got considerably more diverse than a bag full of cold subs.

The downside? Many operations like this don't take cash, limiting their clientele to people willing and able to make transactions in a high-tech world, where printed currency is seen as an outdated inconvenience rather than a necessity. 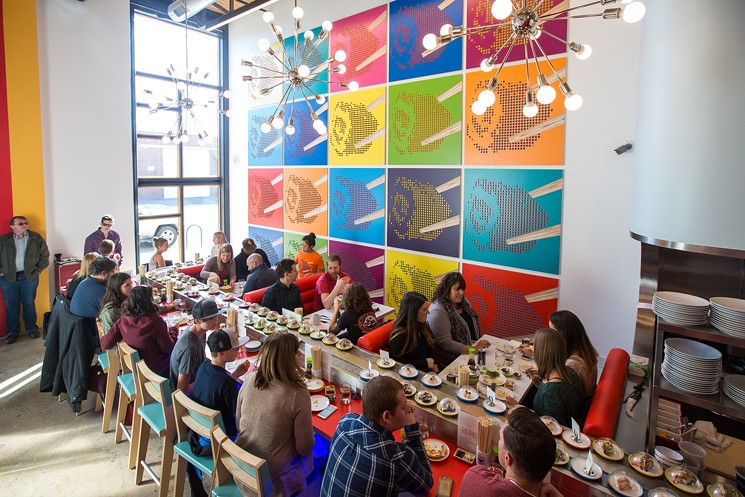 Restaurants like Sushi-Rama can serve more people with less labor.
Danielle Lirette
Even food prep and delivery are becoming more automated to help manage labor costs. After opening its first conveyor-belt sushi bar in RiNo at the end of 2015, Sushi-Rama now has four metro Denver locations, with a fifth slated to open next year at Broomfield's Arista Place development, and the obvious robotic food delivery system that snakes its way through the dining room is only part of the automation. Plates have electronic chips on the bottom to keep track of freshness as they make their way around booths and bar counters on the conveyor belt. If a plate of sushi hits its time limit, a gate swings in front of its path to shunt it back to the kitchen. And in that kitchen, machines line nori wrappers with rice to make sushi rolls and turn out perfectly formed balls of rice for nigiri. You won't see sushi chefs wielding flashing knives over massive slabs of fish; most of the seafood slicing takes place at a chilly central kitchen before the meat is delivered to each restaurant in a refrigerated van.

Is the notion of hospitality lost when screens and machines replace people in restaurants? Not necessarily. Smart restaurateurs hire the right people and staff with customer interaction in mind. At Avanti Food & Beverage, deciding what to order can be a little daunting, with seven food vendors to choose from, but the bar sends servers around the dining room to take orders, trains its staff on offering pairings to go with your food, and even has mobile card readers so that you can settle up at your table instead of having to muscle your way to the bar to pay. And at Birdcall, roving hosts can make food recommendations and even handle cash transactions if you're uncomfortable at the menu kiosk. Still, an iPad mounted on a countertop will probably never call you "Hon" as it fills your coffee mug.

Automation looks like the future of the restaurant world, but good service never goes out of style.
KEEP WESTWORD FREE... Since we started Westword, it has been defined as the free, independent voice of Denver, and we'd like to keep it that way. With local media under siege, it's more important than ever for us to rally support behind funding our local journalism. You can help by participating in our "I Support" program, allowing us to keep offering readers access to our incisive coverage of local news, food and culture with no paywalls.
Make a one-time donation today for as little as $1.