Mental Health Struggles Don't Take Days Off, Even in Hospitality 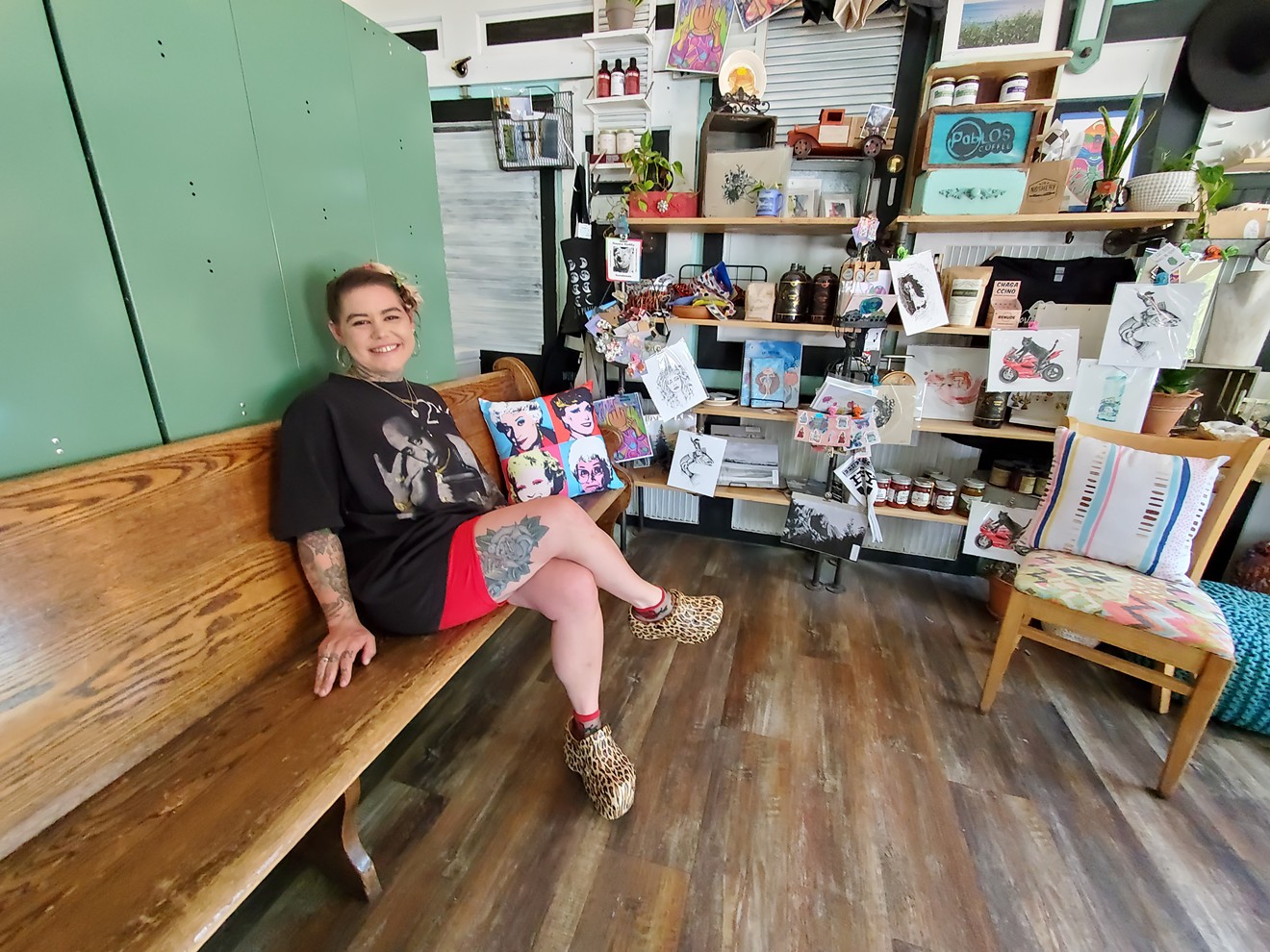 Justa Ward Alvarez is taking her mental health journey day by day. Molly Martin
Justa Ward Alvarez sits at a table inside The Noshery, the bakery and cafe at 4994 Lowell Boulevard that she co-owns with her husband, Mike Alvarez, and founder Andrea Knight. All of the other tables are empty, the chairs stored upside down on top of them. Justa is sporting an oversized Tupac T-shirt, her many tattoos, including several covering her neck, on display. Her style and the hint of a New York accent — acquired during time spent living in New York City after leaving her home state of North Carolina at nineteen — make for a tough exterior.

But as she speaks about the temporary closure of the Nosh, as she calls it, Justa's voice begins to crack and tears form in her eyes. This is not just a business; it's an extension of herself and a way of connecting to a community she loves. And the reason for the closure is also deeply personal.

"It's a sad day at the Noshery," she tells a man who'd hoped to come through the locked front door. "We're closed today, but hopefully we'll be open tomorrow."

That man is one of nearly a dozen who walk up during an hour and a half, peeking inside, mouthing, "Are you open?" The business's phone rings several times, too. "I close the door sometimes and take the phone off the hook," Justa says. She can't handle all the inquiries that keep flooding in, asking why the Noshery has been shut down and when it will reopen.

The cafe has become a community hub since it debuted in 2014, when Andrea and Mike, who met while working at Whole Foods, opened the breakfast and lunch spot. Justa relocated to Denver the next year and got a job at the Noshery in 2017. She'd started working in restaurants when she was just fourteen years old, and later studied pastry arts at the Institute of Culinary Education in New York City. There she had a part-time gig at Crif Dogs, a famed East Village hot dog joint with a hidden bar, Please Don't Tell, located behind a phone booth.

For a time, Justa ran food and beverage logistics for music festivals like Bonnaroo and Outside Lands. And when she landed at the cafe, all of her passions — for operations, baking, cooking and community — came together. It's also where she and Mike met and fell in love, eventually getting married and buying majority ownership of the Noshery in November 2019.

The space is now covered with art painted by one of Justa's friends; the walls are lined with old records and thank-you notes from regulars; and one side of the shop is filled with locally made goods for sale.

"Honesty, I love the fucking Northside," Justa says of the area where she works and lives just a seven- minute walk from her business. "This corner of the world I have dubbed one of my favorites — and I have traveled." 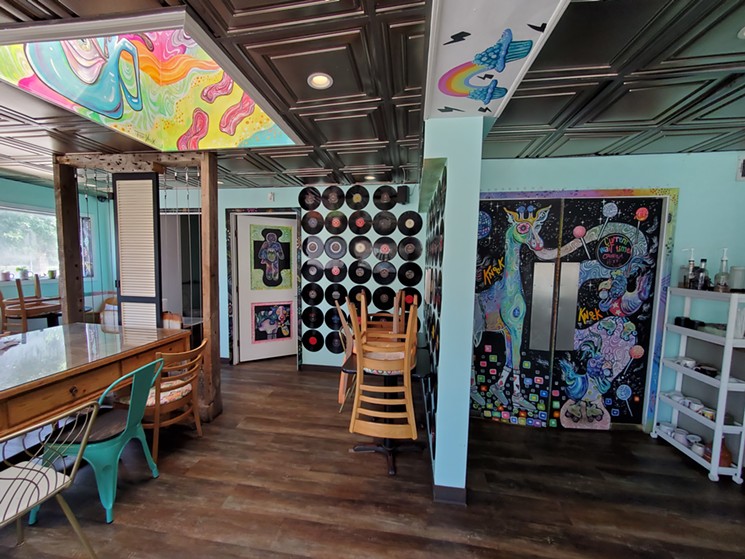 Expansion plans are in the works for at the Noshery.
Molly Martin
That passion comes through in everything Justa does at the Noshery, and it's why she and her husband each regularly worked seventy-hour-plus weeks over the past seventeen months, churning out rotating pastries like scones, muffins and doughnuts. When it's open, the cafe also serves a daily quiche, breakfast burritos and sandwiches made with turkey breast that's brined, roasted and hand-sliced in-house. For Thanksgiving 2020, Justa made 300 pies with hand-rolled crusts ("We don't have a sheeter," she notes), and she's baked countless birthday cakes for children in the neighborhood, many of whom she knows by name — along with knowing their favorite breakfast foods.

But while it's always been Justa's nature to power through life at full speed, a visit to the doctor in May 2020 put on the brakes. "During COVID, I was very busy," she recalls, "but I went to the women's health clinic at Denver Health, and there was a survey [on mental health]. I read the questions, and then I swear I looked up and was like, 'Is this a joke?'" The questions made her realize that while she'd been working so hard to keep her business afloat, her mental health, which she'd struggled with and unsuccessfully sought help for in the past, was suffering.

After filling out the survey, she was connected with a therapist and a psychiatrist, and began the process of addressing what was initially diagnosed as generalized anxiety disorder and depression. "Working on yourself, accepting and doing the actual work, is really fucking hard," she admits.

Also difficult: keeping a business running during a pandemic while also planning for a rebrand and expansion. Justa has big ideas for the Noshery's building, which is over 100 years old and was built by a Hungarian immigrant. "I'm not in this to get rich," she says, "or I would have picked something else." Her future vision isn't so much about increasing the profitability as it is about increasing the space's impact in the community.
The details of the plans are under wraps for now, however, because another development has taken precedence. Last month, Justa received word that she'd been mis-diagnosed by her mental health team. The new diagnosis: bipolar disorder. The revelation hit her hard. Realizing that she'd put in over a year in therapy only to feel like she needed to start the process all over again was overwhelming. Justa realized that she couldn't keep up with the day-to-day operations of the Noshery while also focusing on her mental health, and she and Mike decided to close temporarily. 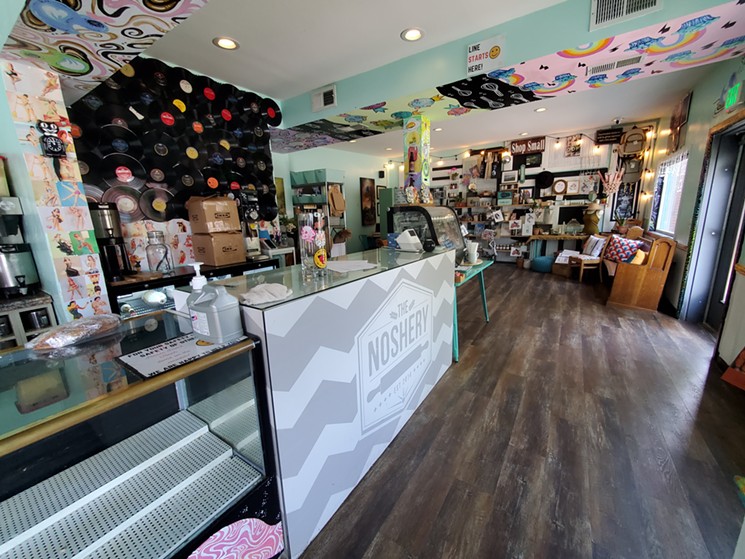 The Noshery is more than a cafe, it's a community hub.
Molly Martin
"Being bipolar has always been one of my worst fears," she admits. "[The diagnosis] has changed my life, whether I like it or not. I'm working to actively get my mood stabilizers up and everything to work the way it's supposed to."

The closure has been tough on both Justa and her husband. She and Mike "of course love our loyal following and the continued patronage of our neighborhood," she says. "The calls, texts, emails and reviews are heartwarming, to say the least. Our restaurant being closed is my personal worst nightmare. Kinda crazy we could survive all last year and end up here."

As difficult as it is to keep the Noshery closed for now, Justa knows it's for the best. Along with focusing on her mental health —  a common struggle that she hopes more people will discuss openly after they hear her story — Justa is taking time to analyze the business and do some restructuring in order to make operations more profitable and support that expansion project.  She and Mike are also hoping to hire extra help — like so many in the restaurant business — so that they can get back to regular business hours without overextending.

The cafe reopened on August 6 for a single five-hour shift, selling doughnuts to neighbors who've missed the place immensely. "We have been lost without you," wrote one commenter on Instagram. But a planned reopening on August 10 was pushed back when Justa made the call that she just wasn't ready to get back to business quite yet.

While the hours may vary when the Noshery finally does reopen, she promises that the cafe will be back. The plan is to take things one day at a time, with the goal of operating Tuesday through Sunday from 6:30 to 11:30 a.m. until the business is fully staffed and ready to expand its hours.

And Justa will continue to do the hard work: in the kitchen, in her community, and fighting for her mental health.
KEEP WESTWORD FREE... Since we started Westword, it has been defined as the free, independent voice of Denver, and we'd like to keep it that way. With local media under siege, it's more important than ever for us to rally support behind funding our local journalism. You can help by participating in our "I Support" program, allowing us to keep offering readers access to our incisive coverage of local news, food and culture with no paywalls.
Make a one-time donation today for as little as $1.