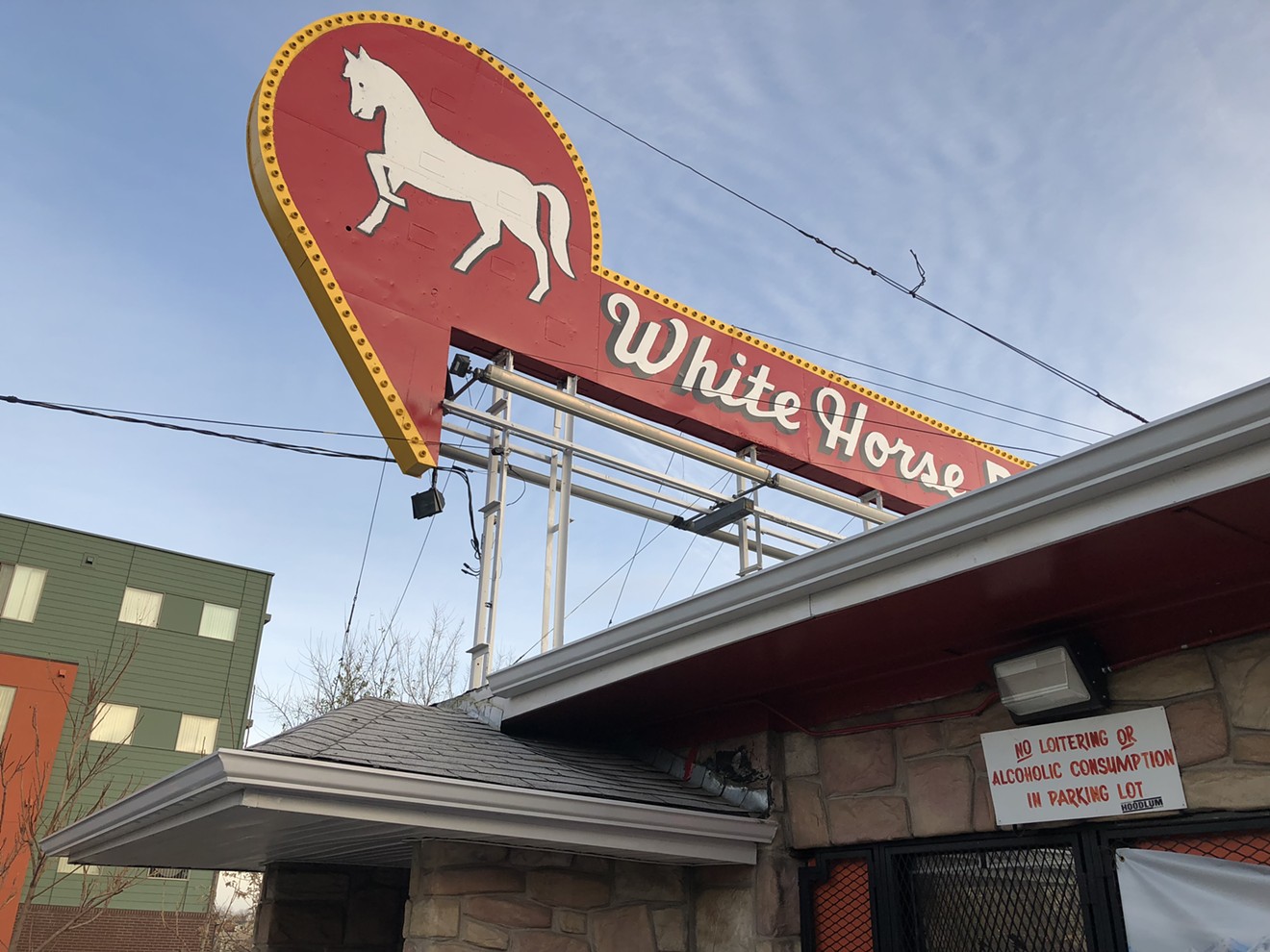 The White Horse Bar has been around since 1926. Sarah McGill
It took me three tries to finally get a drink at the White Horse Bar (or Lounge, depending on whether you believe the sign on top of the building or what the internet tells you). Last winter, I tried to visit the White Horse (5130 West Alameda Avenue) with a friend who lives in the area. There was nothing in the parking lot but a lone Chevy Caprice Classic with some feral cats running around beneath its wheels. My memory also places a tumbleweed rolling through the empty lot, but I don't think that was actually real. My friend and I figured it would be futile to get the true story on the divey old place if there was literally no one in there. My second attempt was on a recent Sunday with my roommate, looking for a little Sunday Funday action. Upon rolling up, we discovered a handwritten sign that read "Open at 4." It was only about 2 p.m., so we decided to hit up another nearby spot in the Westwood neighborhood and come back later. The third time was the charm.

After passing the extensive list of "BAR RULES" posted by the door, we entered to find one bartender, one older customer and two cats inside the bar. It was like stepping back in time to a weird era with a mostly-’70s aura. The amazing jukebox was spinning classics by Tina Turner and Bob Seger, with some Reba McEntire and George Jones thrown in. In the background, Fox News was playing on one of the TVs with the sound down low. The cats played on the vacant dance floor, and the rest of the open space was filled with pool tables, foosball tables and booths complete with what I like to call "seafood restaurant chairs." (I believe the proper term is "captain's chairs.") There are a lot of rules at the White Horse.
Sarah McGill
We sat down at the bar, and Rich, the bartender who wanted to be known only as Rich (no last name), made us some strong mixed drinks served in clear glass mugs. He was wearing a White Horse T-shirt and a button that says "We ID," and looked like he had been doing this for quite a while.

My roommate and I chatted and took in the magnificent hodgepodge of decorations behind the bar. A cacophony of Christmas lights, various paintings and statues of white horses, artwork depicting Betty Boop, and bits of neon green and orange poster board advertising "Corona 3 for $10" or "Cinnamon Schnapps $2" covered every surface. There was also a snapshot of John Elway drinking in this fine establishment — taken, according to Rich, "before the Internet." Also from before the Internet: a poster of one of my favorite ’80s movie characters, E.T., encouraging patrons to "Phone home" if they've had too much to drink. The cash registers looked like they pre-dated much of the rest of the equipment and decor, but I suppose there's no need to change that sort of thing when the bar is cash-only.

E.T. tries to use his fame for good by encouraging people not to drink and drive.
Sarah McGill
The White Horse is definitely one of a dying breed; it opened in 1926 as a bar (inexplicably in the middle of Prohibition), and drinks have been flowing at this spot near the corner of Sheridan and Alameda ever since. The same owner has operated the place since 1974, and it seems like that was also the last time there was much in the way of renovation or upgrades. But that's part of what makes bars like the White Horse endearing — the fact that they haven't given up the ghost to the kids these days and their trends. According to Rich, the kids these days actually do love it at the White Horse. He sees a lot of younger people coming in, and someone even filmed a movie there recently. What movie, when it was released, or if it was released are details that Rich did not recall.

He told us there isn't much to talk about in the way of events, just that liquor specials rotate periodically and happy hour specials are buy two drinks, get one free, every day from 4 to 7 p.m. Sometimes the staff celebrates with patrons for holidays or the Super Bowl. They also rent the establishment out for private events. In true dive-bar form, there's no food to be had except for Slim Jims and bags of chips, so I'm guessing those private events need to be catered.

After a while, a second older gentleman joined us at the bar. Rich turned on one of the TVs for him and gave him the remote. He told us he lived in this neighborhood all his life, and he and our other new friend reminisced about the fact that Morrison Road, now home to new apartments, used to be nothing but junkyards. They also started telling me about various awesome-sounding establishments, past and present, with names like Tropics, King's Court, Suzie Q's and the Cuckoo's Nest, many of which, according to them, have been around "since God created dirt" — just like this place, they affirm, referring to the White Horse.

"You can almost feel the history," Rich said wistfully. And it definitely feels old, in a way that is simultaneously sad and beautiful. A feral cat hits the dance floor at the White Horse Bar.
Sarah McGill
But the old-timers here know things are changing, and they see new faces in the bar all the time. They told us we remind them of some other young people that were in recently, "talking like us." I don't know how we talk, but they didn't seem to mind, and meant it as some sort of compliment. At least we weren't violating any of the bar rules outlined on the sign, such as "No gambling, loitering, or foul language" and "No biker colors," so we were okay to stay.

Rich even gave us some White Horse-branded pens as souvenirs and offered to get us another round of drinks on the house. But our Sunday Funday was limited-time-only, and we had to get ourselves together for the week, so we bid our new old friends adieu, and the bar cats, too, one of which was very fond of my roommate. We joked about him following us home, but it didn't seem like he was in any hurry to leave his home at the White Horse. Neither were we, cat.