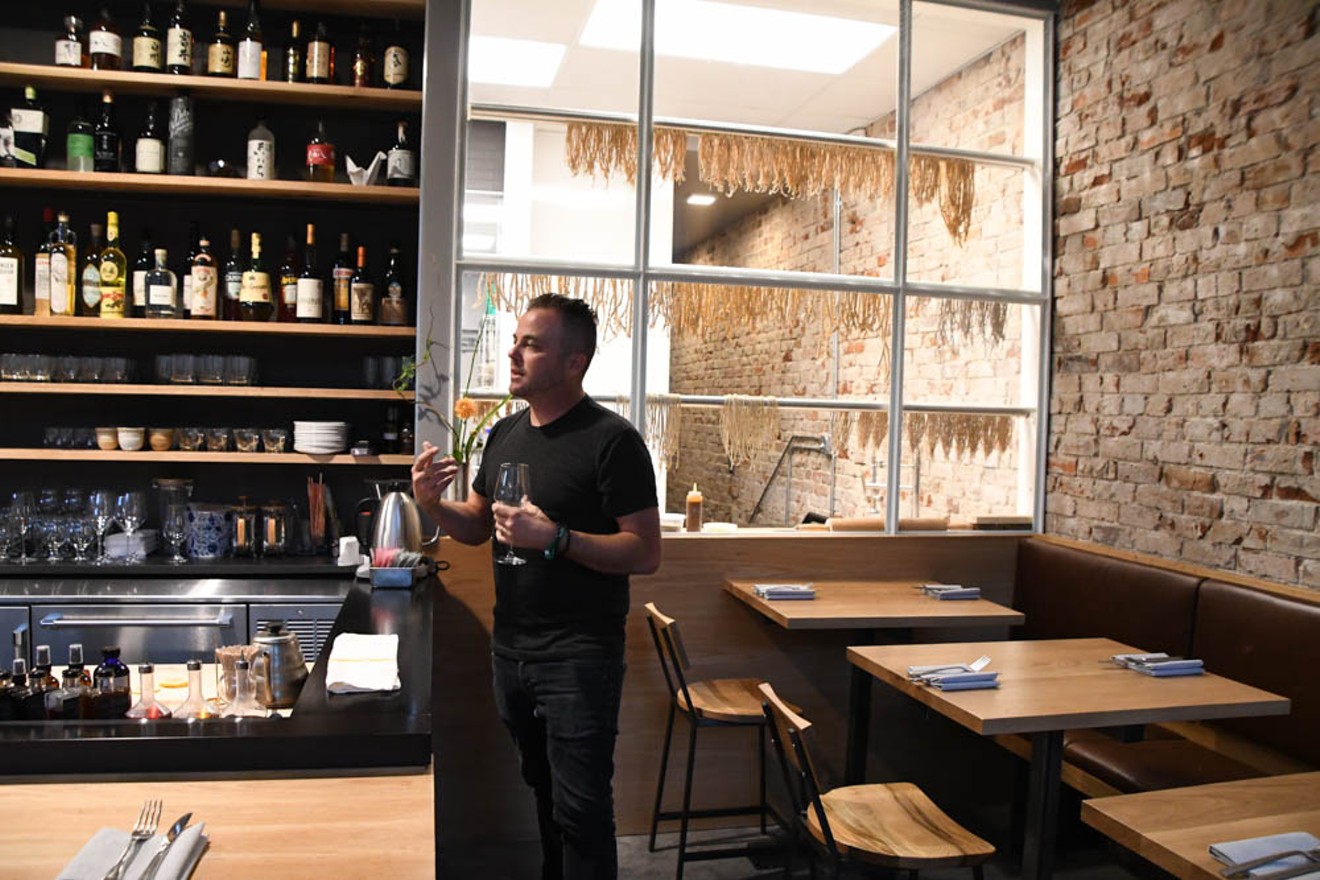 Chef Kelly Whitaker has launched chapter two of the Wolf's Tailor. Rob Christensen
Chef Kelly Whitaker launched his visionary restaurant, The Wolf's Tailor, two years ago at 4058 Tejon Street with the goal of upending nearly every aspect of the standard restaurant model, from the way that front- and back-of-house employees are trained and paid to how customers experience a meal and perceive cultural influence on modern cuisine. The result was baffling to some but caught the attention of food lovers and critics — enough so that the eatery was named one of the ten best new restaurants in the U.S. by Bon Appétit in 2019 and earned Whitaker James Beard Award nominations in 2019 and 2020.

But despite the success and praise, the chef is in the same boat as every other restaurant, having to reinvent his business model to keep from becoming a casualty of the coronavirus economic disaster. But Whitaker says change was built into the concept of his Sunnyside eatery, so ditching what's not working — or even what is — comes as part of the plan.

"This is an ongoing story, so this is chapter two," he says of the reopening of the Wolf's Tailor, which has been closed since the March 17 statewide mandate to cease in-house service at all bars and restaurants. "I knew I wanted to do different iterations of the restaurant."

Heirloom Colorado grains are now available to go from the Wolf's Tailor.
Mark Antonation
Whitaker adds that he has known since before the pandemic hit that chef de cuisine Kodi Simkins would be stepping back from her role, so he was already planning changes. The restaurant shutdowns accelerated his plans, and he said he's had to retool, rehire and retrain at his other other restaurants, Basta in Boulder and Bruto at the Dairy Block downtown. Much of that was because he knew he'd be spending all of his time at the Wolf's Tailor, along with chef Sean Magallanes and pastry chef Jeb Breakell.

Since the reopening will initially be for takeout only, Whitaker wanted to make sure that the ordering and food service were up to the restaurant's previous standards. So he's using Tock to help customers order, schedule and pay, and he says the platform is designed well to transition back to full service at the restaurant, once it's allowed to reopen. "It will be divided into what's available in-house, for your house and from the shop," he explains. And diners will be able reserve a table, order and pay before they ever enter the dining room, to minimize interactions. "Even our Entrust menu, which typically has eighteen touches, could be down to three or four. Wine service has been overly pretentious for a long time, too, and we've been trying to break that down, too."

A few of the Entrust offerings from The Wolf's Tailor.
Courtesy of The Wolf's Tailor
So although a dialogue between guest and server is a crucial part of the dining experience for many customers, Whitaker realizes that it may not be the best approach for the coming months, so he talks about giving Tock users the opportunity to select just how much interaction they want.

"But don't get too comfortable with what we are now, because that will change," the chef adds. "We'll be doing  spring/summer and fall/winter chapters, because it's a six-month period and it allows us a chance to learn and adjust. But you have to have the public's trust to do it this way."

As an example, he says, a new chapter at some point down the road could embrace the American diner tradition (with the Wolf Tailor's signature heirloom grains and other Colorado ingredients, of course). And the popular ribs that Bon Appétit raved about could disappear to make way for other ingredients more available or seasonal (because meats, seafood and vegetables all have their separate seasons).

For now, the new Wolf's Tailor menu is available for pre-order on Tock for pick-up between 4 and 8 p.m. Wednesday through Saturday. Orders must be in by noon the day you want your food, but ordering ahead is better, because like a table reservation, the pre-orders sell out entirely. You can build your order à la carte or choose the Entrust option (this week's is $45 per person) to get seven to ten small bites selected by the chef, as the closest thing you'll get to omakase without sitting at a chef's counter. There are also additional beverage pairings available, as well as a kids' bento box for $9. Tack on jars of marinara, loaves of bread or even heirloom flour grown by Jones Farms Organics in the San Luis Valley and milled by Whitaker's team for your home cooking needs.
KEEP WESTWORD FREE... Since we started Westword, it has been defined as the free, independent voice of Denver, and we'd like to keep it that way. With local media under siege, it's more important than ever for us to rally support behind funding our local journalism. You can help by participating in our "I Support" program, allowing us to keep offering readers access to our incisive coverage of local news, food and culture with no paywalls.
Make a one-time donation today for as little as $1.