It's the End of an Era: Work & Class Co-Owner Tony Maciag Is Retiring Originally from the Detroit area, Maciag is a self-described introvert known for his gruff (or, as Rodriguez  describes it, "grumpy") demeanor. He started working in restaurants more than three decades ago as a way to challenge himself before realizing that he was "pretty good at it," he says. He moved to Denver in 1992, working the front of the house at spots like Trinity Grille and Mel's along the way.

Rodriguez is an energetic, brash firecracker who moved to Denver from Mexico in the 1990s and, under mentor chef Jennifer Jasinski, worked her way up from dishwasher at Panzano to prep cook to sous chef and beyond. Now the owner of three restaurants — Work & Class, Super Mega Bien and Cantina Loca — she's also the executive chef behind the reboot of Casa Bonita.

Both have a penchant for profanity, one of the many ties that bind this unlikely pair of friends and business partners. But on January 30, Maciag is retiring and officially moving on from Work & Class, the popular restaurant that the duo opened at 2500 Larimer Street nine years ago.

Rodriguez and Maciag met at Panzano in 1998, when he was hired as a bartender shortly after she started working there. "We would talk when I was in the kitchen or after work, and at one point, we just said, 'One day it would be fun to have a great restaurant that just didn't have any of this bullshit,'" Maciag recalls. "No disrespect to a fine-dining restaurant, but it was sort of like, all this fluff, what is it doing? Is this a better experience? Or is the food better just because of all of this stuff?"

Over the years, their paths continued to cross as Rodriguez advanced through the ranks at Crafted Concepts restaurant group, the business Jasinski started with Beth Gruitch; Maciag was the opening general manger of the now-closed Euclid Hall when Crafted Concepts opened it in 2010.

"After I left Euclid — I was probably 42 or 43 at the time — I was like, I either have to get out of the business, or I gotta own it," Maciag says. He had a rough idea of the concept he wanted to create, and that included bringing on a chef as a partner, someone who would be as invested in the restaurant as he was. "That's why Dana is the partner," he notes. "She's the one I picked."

Tony Maciag greets his favorite regular, Pickles.
Molly Martin
Together, the two started breaking down the details of their new endeavor. "It was a reductive process," Maciag explains. "A lot of it was crossing off things I didn't want to do."

Like terrines, for example. "We were just tasting things, and Dana made a terrine and it was delicious," Maciag remembers. "But then it was like, that's not what this is going to be."

What Maciag did want to do was serve really delicious food and drinks in a very flexible format that was quick to execute and handled the growing prevalence of diners with different dietary needs. "It's meat and sides in dog bowls, essentially," he says. "I remember when we first started, Dana's like, 'I don't want my food to come out like that.' And we had a battle about it."

But even when they battle, there's one bottom line on which the two agree: "It has to feel good and right to us," Maciag notes. That approach extends from the food and how it's plated to operations and how employees are treated, making decisions like opting to close one day a week (something that was not the standard at the time) and taking a break every year for Christmas.

Their main motivation in creating Work & Class was, "How can we make a difference?" Rodriguez explains. "Even if it's just one restaurant. That was the connection between us. We wanted to make a difference."

The restaurant's approach to serving meats by weight, à la carte sides and pre-batched cocktails was paired with another important component: the house rules, which hang near the host stand. They contain wisdom such as "Wait times are estimates, not prophecies," "No table hibernation. (Others gotta eat too)," and "No reservations unless you're Jimmy Hoffa."

"Good service is a two-way street, and it always has been," Maciag explains. "People who get bad service everywhere they go, it probably has a lot to do with them, as well. ... 'Help me help you' was the idea behind [the rules]. It gets away from the old way, where everything was smoke and mirrors in a restaurant."

And so on January 29, 2014, the restaurant that had its own rules and didn't take reservations opened with no idea how many people might be coming in to dine. "It was scary," Rodriguez admits.

"But it went very quickly from, 'Is anyone going to show up?' to 'Are we going to be able to handle this?'" Maciag adds.

Work & Class's approach was an immediate hit in an era of chef-driven fine dining. "I feel like we were part of breaking that down," Rodriguez says. "It's not McDonald's, it's not Chipotle, but it's not a high-end restaurant. It's right in the middle."

Bolstered by a service model that operates like a NASCAR pit crew — quickly, with precision and as a team — the restaurant housed in a small shipping container in a RiNo that was still fairly gritty, with plenty of warehouses, gave the Denver dining scene a shot of energy straight to the veins. And it hasn't stopped.

But after making sure Work & Class survived COVID, Maciag was ready for a change. "I want to be physically and mentally healthier," he says of his decision to retire.

"We always want that for our employees," Rodriguez adds. "We're always looking out for everybody, and we're the last people we look out for. Now, it's like, ah, fuck, we're old. ... It's time to at least make some little changes."

Maciag plans to spend a year or more traveling, and isn't quite sure what's in store beyond that, or where he'll ultimately end up living. "I also don't know if I'm going to lose my mind not having a thousand people to talk to every night," he says.

"I think he's coming back in June, like, 'Hey, can I have a part-time job?,'" Rodriguez jokes.

But even as he prepares to say goodbye, Work & Class continues to pack in crowds night after night, despite the dozens of other eateries that have sprung up in RiNo. "It still amazes me. Eighty percent of the people who come here on any given night haven't been here before," notes Maciag.

While he loves new customers, he's not exactly thrilled with the RiNo of today, and the way it draws people who are mostly concerned with being in the hottest neighborhood. "There's not many things that pain me more than when someone comes in and is like, 'What's the name of this place?,'" Maciag says. "Like, you don't even know why you're here? You're just here because you can be, or because there happens to be a seat? Ugh, I hate that. At the same time, I'm gonna blow you away, and you're going to remember this."

It's not just RiNo where Maciag has seen a shift. "Look at downtowns of any city anywhere in the country. There's no people in the offices, they're not as desirable places, there's not as much traffic, but yet rent keeps going up," he says. "That's hugely problematic for anybody who's starting a restaurant. The farther away from downtown, the better." 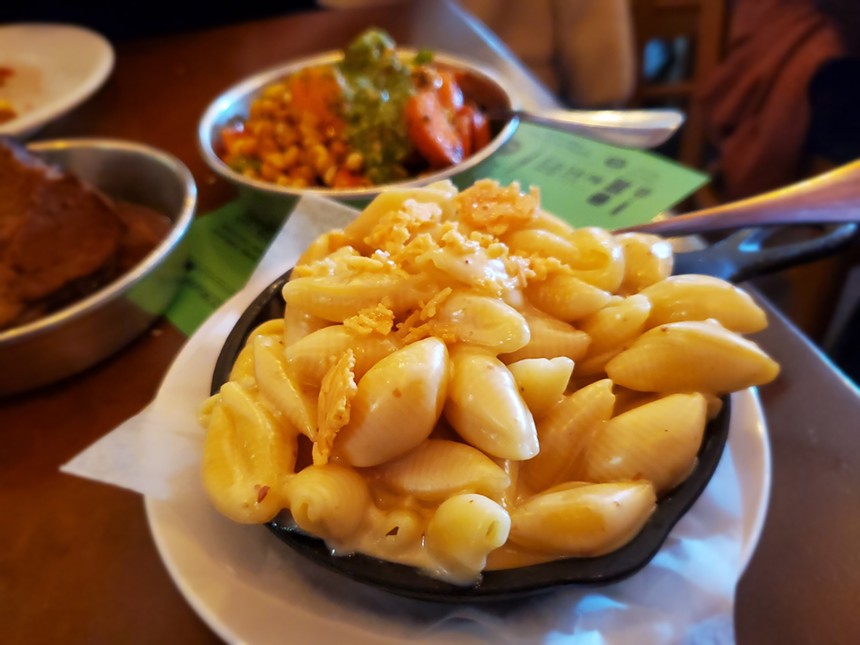 Mac and cheese has been a staple at Work & Class since day one.
Molly Martin

"If we had an opportunity to open another restaurant around here, we probably wouldn't do it, because we know the direction that this is going," Rodriguez adds. "You work so hard to get nothing at the end of the day; you just become a paycheck factory." Despite that, Work & Class isn't going anywhere. Its solid reputation, relatively low rent and small number of staff compared to the volume of business it brings in makes it sustainable, even in today's challenging environment.

And so Rodriguez and Tabatha Knop — who had never worked at a restaurant before joining the opening team at Work & Class and becoming a partner in 2016 — are determined to keep it going, with Maciag's original vision guiding the way. While there won't be any big changes to the food or drink menus, there will definitely be changes. "The customer service, the sarcastic way that Tony did it, and the way that Tony is always engaging with all the tables, that's going to be gone with Tony, so we need to teach [our staff] how to keep that so this can still be the same place," Rodriguez explains.

"I have tons of anxiety about it all, obviously," Maciag admits. "But at some point, you've gotta be like, I've given you everything that I have, and now it's yours. So go for it and just crush it, and just remember what's important."

One thing that's clearly important to both is each other. "Thank you for putting up with me. Thank you for letting me be me," the normally stoic Maciag shares with Rodriguez, a hint of tears in his eyes.

"Are you gonna cry?" she teases, before adding, "We're so good together, baby. ... I will never find a partner like Tony ever in my life. I think it's because we both come from the bottom and we worked really hard to get where we are. But I will never find a person that I know I can trust. Even if he had the opportunity to fuck me up, he wouldn't do it."

While he's not sure if he'll return to the Mile High, Maciag is grateful for the city he's called home. "I absolutely am a better person for what I've experienced and the people I've interacted with over 25 years in Denver," he says. "It's amazing, and I wish somehow I could shake hands with every person who, even if it was one time, I had some meaningful interaction with in my restaurant. Those are the things I remember."

After a long pause and a deep breath, he offers this parting advice, which can be applied both inside and outside of the four walls of Work & Class: "Be thoughtful. Make good decisions. And throw a party every night."
KEEP WESTWORD FREE... Since we started Westword, it has been defined as the free, independent voice of Denver, and we'd like to keep it that way. With local media under siege, it's more important than ever for us to rally support behind funding our local journalism. You can help by participating in our "I Support" program, allowing us to keep offering readers access to our incisive coverage of local news, food and culture with no paywalls.
Make a one-time donation today for as little as $1.