Upslope Brewing's Backcountry Taproom Is as Colorado as It Gets

Upslope Brewing
It seemed like a brilliant idea: Find a beautiful, secluded spot in the mountains, get a permit from the U.S. Forest Service, set up a makeshift taproom under the pine trees, then provide the coordinates to a few dozen hearty beer drinkers who could hike up to the location with their families or their doggos and be the first people to enjoy a brand-new beer under Colorado's signature blue skies.

And it was a brilliant idea. But in reality, “the Forest Service doesn’t work that way,” says Upslope Brewing vice president of sales and marketing director Henry Wood with a laugh, adding that it wasn't easy to persuade people that the brewery wasn’t just planning to throw a giant kegger in the woods.

So Upslope had to find a different path, eventually partnering with the privately owned High Lonesome Hut, situated in the Arapahoe National Forest between the towns of Fraser and Tabernash, to host its first Backcountry Tap Room event in September 2015. Anyone who made the 2.3-mile trek would be rewarded with a 19.2-ounce can of Oktoberfest Lager, along with two other canned beers. The brewery was only expecting a handful of friends and customers in hiking boots — but more than 350 people showed up. Upslope Brewing debuted the Backcountry Taproom in 2015.
Upslope Brewing
The next year, there were 2,000 people — and hundreds of dogs — on the trail to another privately owned hut near Leadville, Vance’s Cabin, and Upslope realized that it needed to sell tickets in order to limit the number of people and to provide some infrastructure. It also teamed up with the Leave No Trace Center for Outdoor Ethics to help highlight the concept of good stewardship in Colorado's natural areas.

On October 2, Upslope will host its sixth annual Backcountry Tap Room (the 2020 version was canceled) at the top of Mary Jane Mountain — and things have come a long way since 2015.

Winter Park Resort is the official sponsor now, and attendees — there is so much interest that the number will be capped at 2,000 — will pay $20 each to take the gondola to the top of the resort. From there, they'll hike two miles along the 11,200-foot Top of the Rockies trail to Lunch Rock, where they will find four bars, a bluegrass band and cans of Mary Jane Ale, a beer that Upslope brews just for Mary Jane and Winter Park.

It hasn't been easy, but the unusual one-day brewery event has definitely been worth it. 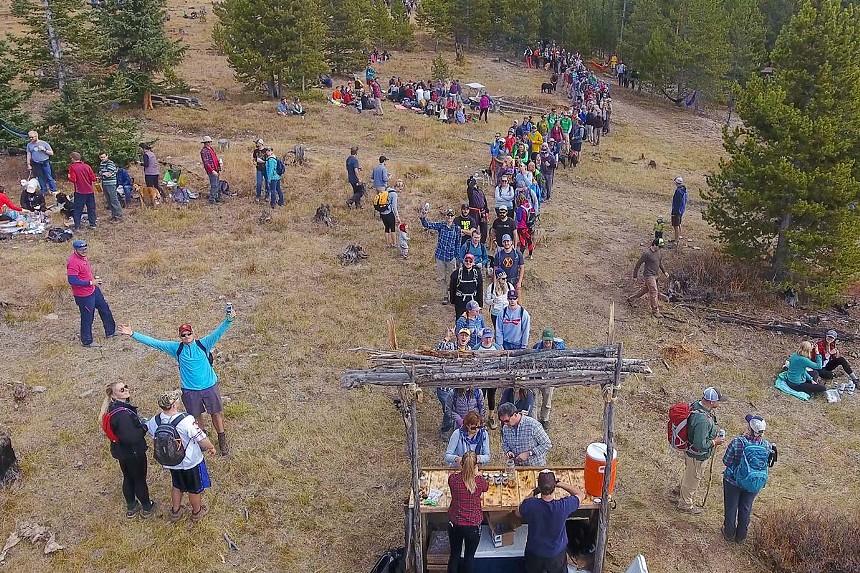 Upslope got more than it bargained for in year one of the Backcountry Tap Room.
Upslope Brewing
“For the most part, it has been more successful than we could have ever imagined," Wood says. "It sells out every year. ... This is Colorado. People want to spend time in the backcountry, they want to spend a nice fall day in a beautiful place, and they want to get to try a new beer for the first time from Upslope. I don't know that we could pull this off in other places.”

The year after the Vance’s Cabin event, Upslope moved the Backcountry Tap Room to the Granby Ranch ski area and then to a piece of Grand County private property called Grand Park. “It was good to move it around, but we have found that ski resorts were much easier to work with," Wood says. That's because they have parking and Wi-Fi and the kind of insurance that allows for large gatherings, not to mention relationships with the Forest Service. Winter Park also has the access road needed in order for Upslope to haul its bars and beers to the designated area — although by the time the public arrives, Wood says, all vehicles have been moved, to preserve the backcountry feel.

Every ticket sold directly benefits the Leave No Trace Hot Spot Program, "which identifies areas suffering from severe human-related impacts that can thrive again with Leave No Trace solutions," according to Upslope. Get more information and tickets at Eventbrite.
KEEP WESTWORD FREE... Since we started Westword, it has been defined as the free, independent voice of Denver, and we'd like to keep it that way. With local media under siege, it's more important than ever for us to rally support behind funding our local journalism. You can help by participating in our "I Support" program, allowing us to keep offering readers access to our incisive coverage of local news, food and culture with no paywalls.
Make a one-time donation today for as little as $1.