What Happened to New England? The Region Is Nearly Absent From GABF

Where are you, New England? Brewers Association
The Great American Beer Festival has always been a little geographically lopsided. Since the annual event — which begins Thursday — was founded 36 years ago in Boulder, it’s no surprise that Colorado is the most heavily represented state. California also brings the brews, with more than 150 breweries at GABF.

The next-heaviest hitters are Oregon and Texas with more than forty apiece, then the Midwest: Illinois, Indiana, Michigan, Ohio and Pennsylvania all have between twenty and forty.

Over the past few years, however, even as the number of participating breweries has shot upward, from 580 that appeared at the Colorado Convention Center five years ago to nearly 900 in 2017, the geographical representation hasn’t kept pace — at least for the breweries that sign up for a booth at the Convention Center (several hundred more enter their beers into the competitions).

The South has always had trouble making a splash. Then again, states like Alabama and Mississippi have historically lagged behind when it comes to craft breweries.

This year, however, the South isn’t the problem. The biggest no-shows come from a region that has become known as a brewing powerhouse in the past decade: New England.

The six states that make up the northeastern corner of the United States are collectively sending just eighteen breweries. (By comparison, Indiana is sending 23 all by itself.) Eight are from Massachusetts, while four are from Connecticut. There are three each from Maine and New Hampshire, and zero from Vermont and Rhode Island. I’ll say that again: None from Vermont. No Hill Farmstead or Four Quarters or Lawson's Finest Liquids. No Alchemist or Long Trail or Von Trapp Brewing. (Editor's note: This article has been updated to reflect that Delaware is not, in fact, a part of New England.)

So what gives — and is it time for the organizers of GABF to change their strategy?

Come back, Vermont! We miss you!
Vermont Brewers Association
Melissa Corbin, executive director of the Vermont Brewers Guild, acknowledges that the situation is a little embarrassing, but she says the small size of many of her state’s breweries compared to their outsized popularity may be partially to blame.

“Our industry is so hot right now that we can’t keep up with production,” she says. “I think that for the bulk of the breweries in this state, taking time away from the brewery to go to a conference might not be possible because they're having trouble enough keeping up with demand.”

She also points out that since many Vermont breweries don’t distribute outside of the state, the expense of donating beer and sending employees and resources isn’t worth the cost. Vermont will be represented in the contest, however, and at its Guild booth, where Corbin will be pouring beers from about eight breweries.

"With the proliferation of festivals in general, the value of attending more than a handful is rapidly diminishing, and quite frankly can be exhausting and expensive. We chose festivals based on geography and connection to the cause or organization supported by the festival. GABF just does not work for us because Denver is not our turf, nor will it ever be,” says one.

"GABF is a lot of fun to attend, but it comes toward the end of the busy season for most breweries in Maine, and typically small breweries in our area are short-staffed as it is, with many employees just returned back to school,” another says. 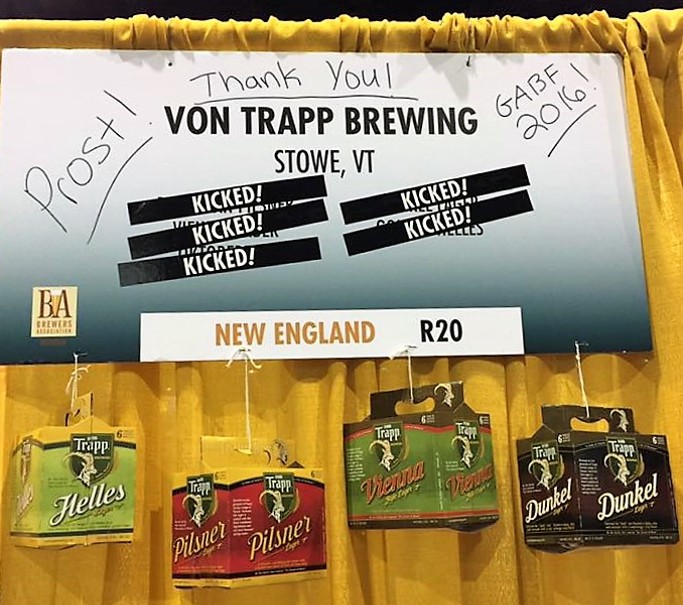 Hopefully, Von Trapp Brewing's GABF booth will return in 2018.
Von Trapp Brewing
"That type of beerfest — massive crowds, a drunken mentality (pretzel necklaces, foam fingers) and a push for hundreds and hundreds of breweries, more so than any festival-goer could possibly hope to make sense of and/or make connections with, has passed its prime, in our opinion,” says a third. “In recent years we have really enjoyed moving towards only participating in smaller, more intimate fests with new and interesting parameters (music components, full pours), as well as traveling for events where it's just our brewery featured.”

So it is time for the Brewers Association to consider holding regional GABF qualifiers or smaller fests? It's an idea that has been talked about for many years but that so far has gained no traction.

"The Great American Beer Festival has considered various scenarios with regional qualifiers in the past," says BA spokeswoman Ann Obenchain. "To date, for a variety of reasons regarding the integrity of the competition, timing and logistics, we strongly favor one larger competition without regional qualifiers."

Obenchain says that although not every state will be represented with a booth, all fifty, and Washington, D.C., are represented in the competition.

J.P. Willliams, of Von Trapp Brewing in Stowe, Vermont, loves coming to GABF, checking out the “fantastic scene” and drinking beers with brewer buddies here. Von Trapp attended for the first time in 2016, a year after winning a medal, but isn't returning in 2017. While it's "odd" that no Vermont breweries signed up for this year’s festival, Williams says, many are just too small to do it every year.

“We decided as a company to attend every other year to pour, but still enter competition styles yearly," he explains. "We plan on pouring again next year, which we can't wait for.”