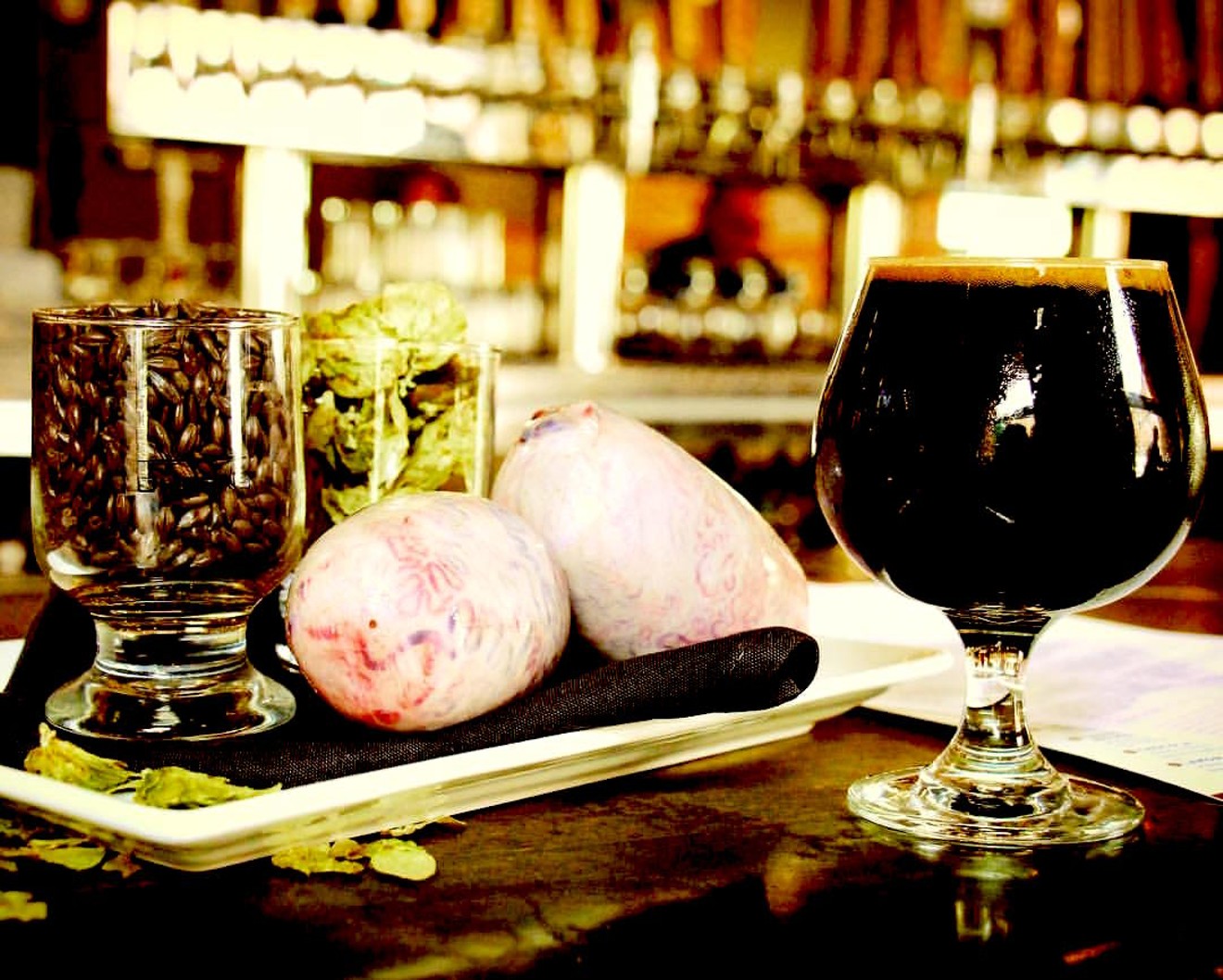 You'll go nuts for Rocky Mountain Oyster Stout. Wynkoop Brewing
It's back and it's ballsier than ever!

After a nearly two-year hiatus, Wynkoop Brewing is bringing back Rocky Mountain Oyster Stout, a much loved — and feared — beer that is brewed with actual bull testicles, known in these parts as Rocky Mountain oysters.

The idea for the beer actually began as an April Fools' joke in 2012 when then-head brewer Andy Brown and former Wynkoop marketing guru Marty Jones produced an eye-opening video about the fake beer. But it morphed into a real product six months after the Wynkoop decided that the reaction to the video — laughter and customers and beer writers alike interested in trying the real thing — merited serious consideration. As a result, the brewery gathered up 25 pounds of the local delicacy, hand-sliced and then roasted them, making a point to mention that the dark and roasty beer was brewed with "three balls per barrel."

That fall, Wynkoop served the beer at the Great American Beer Festival, drawing long lines, and later canned Rocky Mountain Oyster Stout, which it sold in on-theme two-packs. But the beer wasn't made as much in the past few years as a series of different head brewers came and went at the Wynkoop, and it shriveled up entirely in 2020 as the Wynkoop closed off and on during the pandemic for a variety of reasons, including renovation. The most recent batch was tapped on September 19, 2019, according to the Wynkoop's brewing blog.

As the brewery ramped its operation back up in 2021, it also promoted Todd Bellmyer, who had previously worked at Tivoli Brewing and Great Divide, to the head brewer position. Bellmyer decided to remake Rocky Mountain Oyster Stout "as a tribute to everyone that has worked here before me, and because it is our most well-known — and asked about — brand," he explains.

The beer will be sold in these Crowlers.
Wynkoop Brewing
The newest batch was brewed on July 14, shortly after the oysters were roasted (check the brewery's Instagram page for video) and will be tapped on Friday, July 30. The Wynkoop's chef will prepare a special pairing of fried Rocky Mountain oysters to go with the beer. The main recipe is mostly the same, though the ABV is higher, at 9.1 percent rather than 7.5 percent. Brewed with seven kinds of malt and Styrian Goldings hops, it does not taste like cow parts, but is an "assertive, viscous stout with...a luscious mouthfeel and deep flavors of chocolate, espresso and nuts," and a "savory, umami-like note," according to the tasting notes.

Bellmyer says some of his inspiration came from Charles McManus, a longtime brewer at the Wynkoop and now head brewer at its sister company, Phantom Canyon Brewing, in Colorado Springs. "[He] was the one who trained me before I got the head brewer job, and a big part of what Charles is about is honoring the past and keeping some of the old, core brands on with constant improvement."

"I can't say that I was excited to grill bull testes, but that in itself was an experience I never thought I would have when I entered the craft scene in 2014," he continues. "It seems like people go nuts for this beer — pun intended — so what better way to try and get everyone to come back to Wynkoop after a long 2020?"

It will be a seminal moment, for sure.
KEEP WESTWORD FREE... Since we started Westword, it has been defined as the free, independent voice of Denver, and we'd like to keep it that way. With local media under siege, it's more important than ever for us to rally support behind funding our local journalism. You can help by participating in our "I Support" program, allowing us to keep offering readers access to our incisive coverage of local news, food and culture with no paywalls.
Make a one-time donation today for as little as $1.