Kenzie Bruce
Chances are good that you've noticed the street art in Denver. Chances are also pretty good that you've seen something Pat Milbery helped create. From a pop-up park to murals to a school bus, there seems to be a trail of paint behind Milbery (as well as on his pants or notable black hat). Not only has he painted many pieces around town, but he knows the ins and outs of the entire public-art scene. Here are some of his favorite hidden gems in Denver.

Since its opening in May 2016, the Illegal Pete's on East Colfax has become a sort of hipster haven. And what hipster hangout would be complete without some art and Pabst Blue Ribbon? Mike Graves, whose style is easy to recognize from his droopy-eye work, teamed up with Chris Huth to complete the mural.

Unless you're in the Meininger parking lot, you might miss this one. "Driving on Broadway, it's at your back, so a lot of people fly right past this wall," Milbery says. The Pedro Barrios mural can be found on the right-hand side of the wall, which includes six other large murals. This is another one that can be hard to miss if you're not looking for it. Inside the walls of a parking garage entrance, Jaime Molina's art combines wood and colors complementary to the cement foundation: pinks, grays and white. Molina teamed up with Pedro Barrios for this one.

Depending on whether or not a car is parked there, you might need a different perspective to check out Pat McKinney's octopus, aptly holding a rocket ship, outside of RocketSpace. It was added to the alley near 27th and Larimer in November 2016.

Another RiNo piece on Milbery's list is "Peace," by Australian artist House of Meggs, who is currently based in Detroit. The mural was created as a part of the Colorado Crush Walls in late January, following President Donald Trump's travel ban, and includes text reading "#NOBANNOWALL. Added to Larimer's vibrant art throughway in July 2017 is "Skin Condition," which was completed without a projector. Gamma's corner piece catches the eye from three different directions.

If you hop off Colfax Avenue, you can see this collaboration between Colorado Crush founder "Dread" and artist Anna Charney (right). To the left, blending with his notorious black, white and red coloring, is Casey Kawaguchi's work. Tucked in the alley behind Tom's Diner, the unexpected location makes for a standout canvas. 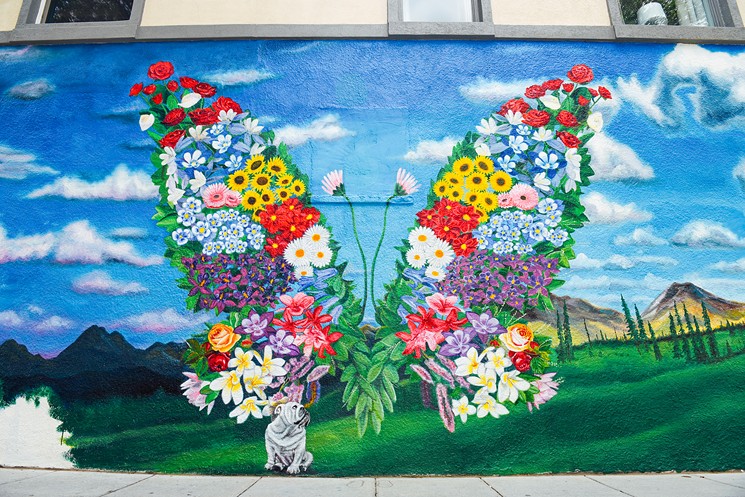 Patrick McGregor's bulldog shows up in more than a few spots around Denver, including electrical boxes, garage doors and walls. The artist has immortalized his pet all over town, including this location on Tennyson. "A lot of people have been missing the wings on this one," McGregor says. His son, Tristan McGregor, helped design and paint them. Did you miss the wings?

You won't see the exact same scene twice in this location. "It's been the evolving canvas for people for the last decade," Milbery says. Often you look up on the side of a building wall for street art. This collaborative piece was painted on the pavement in late May 2017 by the Birdseed Collective. On August 12, it was celebrated at a ribbon-cutting ceremony at the park as a part of Denver Days.

Kenzie Bruce
12. The I-70 Viaduct
Detour

If you've driven over I-70, you've passed over some impressive street art, including this mural by Detour, which was added in October 2016. "I love the detail in the flower, the shading, the vibrant colors," Milbery says. The viaduct will be getting some new art beginning August 18 as a part of 'duct-work 2.

This collective work takes on a few different styles, which makes sense, because collaboration has been key to Milbery's expansive ouevre. Its distinct black-and-white color scheme and line work makes it stand out among other pieces.

On August 12, the 40 West Arts District and the City of Lakewood celebrated their third West Colfax MuralFest. This mural on the side of the ARC thrift store was created during last year's fest, but it's still a keeper on Milbery's list.

Sitting on the patio at Stem Ciders, you might have noticed this creation, added in September 2016 by artist/musician Rum Tum. It's located on the garage doors on the other side of the parking lot.

Behind Buffalo Exchange and City, O' City, there's a motley blend of street art styles. This little pencil is a hidden detail that can easily go unnoticed.

Despite its enormity, this large-scale piece near the 10th and Osage F-Line station can be missed if you're not looking north. Approaching it from the station, you see colorful line details before the entirety of the mural is revealed. Just be sure you're looking up.
KEEP WESTWORD FREE... Since we started Westword, it has been defined as the free, independent voice of Denver, and we'd like to keep it that way. With local media under siege, it's more important than ever for us to rally support behind funding our local journalism. You can help by participating in our "I Support" program, allowing us to keep offering readers access to our incisive coverage of local news, food and culture with no paywalls.
Make a one-time donation today for as little as $1.