Where Will Colorado's Pot Industry Be in 2022? 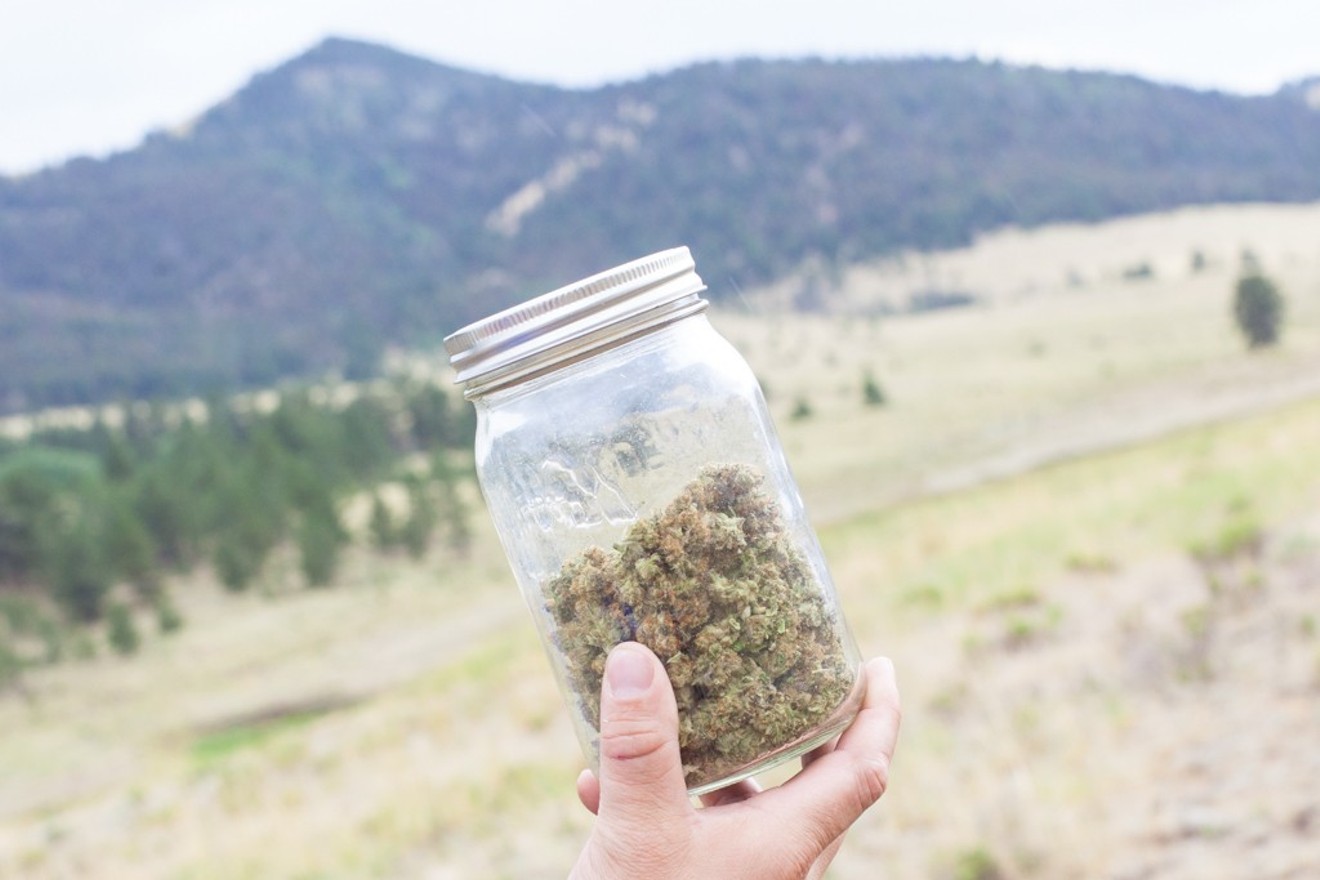 Jacqueline Collins
Although Colorado's legal cannabis industry has maintained a steady pace of increasing revenues over the years, a new market report from one of pot's leading economic-research teams says it could be time to prepare for a plateau.

In BDS Analytics and Arcview's sixth annual State of Legal Marijuana Markets report, the two cannabis firms dive into each state with medical or recreational cannabis programs. Arcview, known for its investment and market research, notes that it's never had so many states to cover in its report — and all that new competition will likely draw tourist buyers into new regions as they come online, including Nevada, California, Massachusetts, Canada and possibly Maine.

"With previous figures estimating one-in-three sales coming from out-of-state travelers, Colorado may have a lot to lose from increased U.S. market competition," the report reads. "Many of those travelers may now have access closer to home, or will in the near future, and any increase in taxes — therefore an increase in price —will disincentivize cannabis tourism within a region."

Denver is currently considering raising its cannabis sales tax by 2 percent to fund affordable-housing efforts, while in 2017 the Colorado Legislature approved raising the state's marijuana special sales tax rate from 10 percent to 15 percent. The report sees these tax hikes as a potential reason for consumers to shift back to the illegal market.

"The extra tax burden will likely further slow the erosion of the illicit market. That erosion had already begun to slow substantially in 2017 as the legal market only grew 15 percent after booming at a 58 percent [compound annual growth rate] from 2013 to 2016," the report reads. "Further tax increases may also prove counterproductive. With more legal markets coming online every year, the need for cannabis tourists to travel to the early-adoption states, like Colorado and Washington, is diminished."

However, data gathered by BDS also notes that Colorado's illegal cannabis market was responsible for the smallest share of consumer spending out of all the states surveyed, at 33 percent — over 50 percent lower than the national average.

Courtesy of Arcview and BDS Analytics
Colorado has already seen declining sales in 2018, in both April and May, according to the Colorado Department of Revenue. May's revenue numbers also declined from the same month the year before, and included the lowest amount for medical marijuana sales since the DOR began tracking sales figures in 2014. 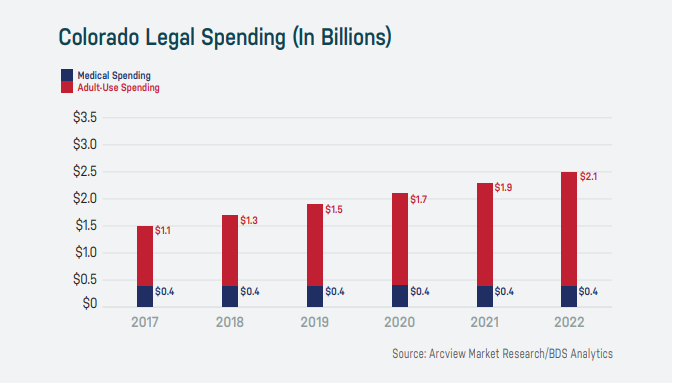 Courtesy of Arcview and BDS Analytics
Although Arcview believes Colorado's pot revenue will post a steady growth rate of around $200 million per year from 2017 to 2022, the firm predicts that MMJ patients will fall by over 14 percent during the same period. 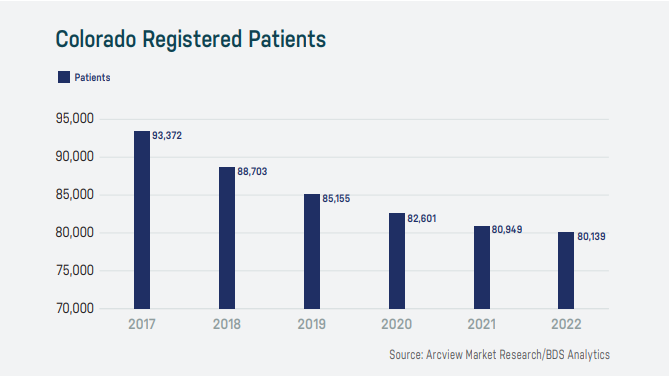 Courtesy of Arcview and BDS Analytics
Cheaper cannabis could also play a role in Colorado's forecasted revenue slowing. The DOR recently estimated that a pound of wholesale commercial cannabis flower costs $846 on average, down from $2,007 in 2015. That drastic drop has trickled down to retail pricing, too, according to dispensary menu service WikiLeaf. Using data from dispensaries in Aurora, Colorado Springs, Denver and Fort Collins, WikiLeaf found the average price per gram was just $9.43 as of 2018, with the average price per eighth at $28.82, and ounces sitting at $168.20.

Grams of trim and shake can go as low as 50 cents in Colorado Springs, according to WikiLeaf founder Dan Nelson, while one dispensary in Denver recently charged $49 for a gram. These different levels of quality have made it harder to monitor standard pot prices, he says.

"We thought the highs and lows would come together eventually because the markets matured so much over the past couple of years — but then you're dealing with different tiers of qualities. You have shake, you have top-shelf flower, and even [hash-infused] caviar," Nelson explains. "We thought it was interesting to see the low end of things. Low-quality stuff like shake or trim is going for, like, $2 a gram."
KEEP WESTWORD FREE... Since we started Westword, it has been defined as the free, independent voice of Denver, and we'd like to keep it that way. With local media under siege, it's more important than ever for us to rally support behind funding our local journalism. You can help by participating in our "I Support" program, allowing us to keep offering readers access to our incisive coverage of local news, food and culture with no paywalls.
Make a one-time donation today for as little as $1.