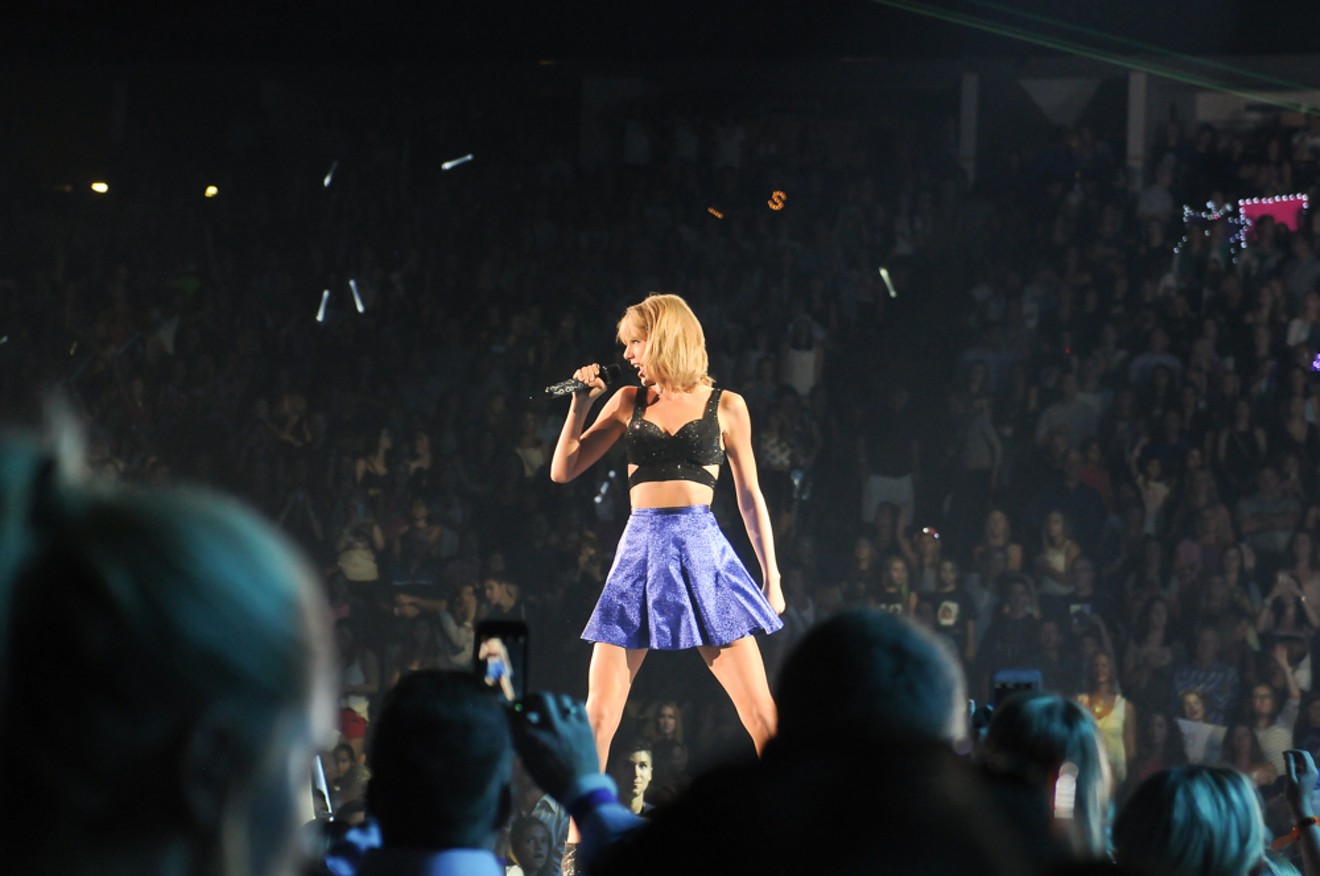 Taylor Swift playing the first of two sold-out shows at the Pepsi Center on her most recent tour for the album 1989. Miles Chrisinger
Taylor Swift took the stand this morning to testify during the fourth day of the Mueller v. Swift et. al lawsuit over an alleged groping incident at a June 2, 2013, meet-and-greet at the Pepsi Center. The pop star was firm and funny as she accused former KYGO morning-show DJ David Mueller of groping her bare butt, an assertion that led to his termination. The word “ass” was uttered over forty times within the hour of Swift testimony.

Mueller sued Swift, her mother, Andrea Swift, and Swift's radio coordinator, Frank Bell, for roughly $3 million in damages after KYGO fired him after the incident; Swift countersued for just $1 for sexual assault.

On the stand, Swift exhibited poise as she reiterated, sometimes bitingly, that Mueller “grabbed my bare ass.” Sporting her signature red lip, the singer wore a navy floral dress with a V-neck, black chunky heels and a silver charm or pendant necklace, and she had her hair pulled back in a bun, face framed by bangs. Her mother, who gave emotional testimony yesterday, was absent because of illness (Andrea Swift was diagnosed with cancer in 2015).

Here are some of the best quotes from Swift’s Thursday morning under-oath statements:

“[The groping] was long enough for me to be completely sure it was intentional,” she said.

Asked about her bodyguard Greg Dent’s responsibility for the incident, Swift responded, “I’m critical of your client for sticking his hand up my skirt and grabbing my bare ass.” 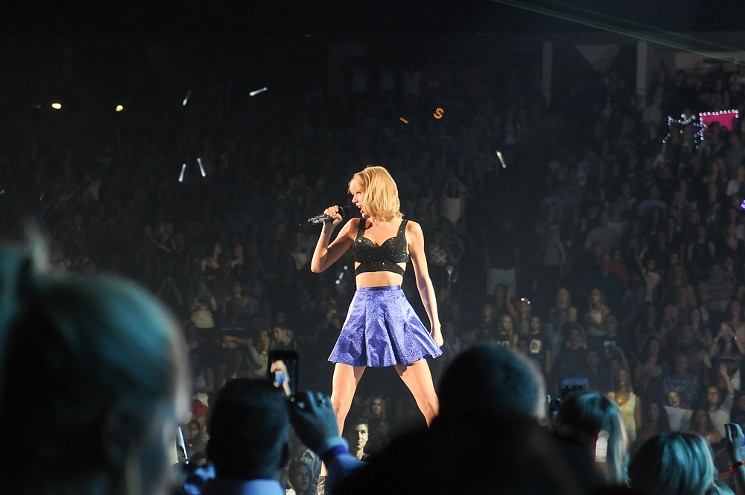 Taylor Swift playing the first of two sold-out shows at the Pepsi Center on her most recent tour for the album 1989.
Miles Chrisinger
Asked if she remembered the people she’d posed with before Mueller and his then-girlfriend, Shannon Melchor: “I know that none of them grabbed my ass under my skirt.”

“I didn’t dislike them,” Swift says of meeting the couple before taking a photo. She says Mueller was loud and Melchor laughing; she judged that they’d been drinking.

“I have experienced every single degree of an awkward first encounter…this was not jostling. We were not diving into the picture. We were perfectly in position.” She continued, “He did not touch my rib. He did not touch my arm…he grabbed my bare ass.” Later, she said, gesturing, “This wasn’t an action shot.”

In a moment that recalled her hit song, “Blank Space,” Swift responded to Mueller’s description of her as “cold” as “a new one,” adding, “I have an uncanny ability to elicit new kinds of criticism as time goes by.”

“You’re interpreting my answer the wrong way,” Swift said clearly when Mueller's attorney, Gabriel McFarland, had her read aloud deposition testimony where she said she “didn’t remember” if there had been incidental touching. She explained she meant that to her recollection, there had been no incidental touching other than the butt grab. The judge made McFarland move on.

“I’m not going to allow your client to make me feel like [his current situation] was in any way my fault,” Swift said.

Asked if she thought Mueller got what he deserved, Swift responded, “I don’t feel anything about Mr. Mueller. I don’t know him.” As McFarland pressed, she said, “I think what he did was despicable and horrifying and shocking, but I don’t know him at all.”

“I didn’t need a picture. I could have picked him out of a line of a thousand,” Swift stated when McFarland questioned her about how she identified Mueller. “I know exactly who did this. This is not alleged."

When asked why the front of her skirt wasn’t ruffled in the photo, Swift replied with this zinger: “Because my ass is located in the back of my body.”

“Absolutely no questions, your honor,” said J. Douglas Baldridge, standing up and then promptly sitting down after having the opportunity to question his famous client.

And from the judge’s bench: “So what do you propose to do with this valuable court time?” asked Judge William Martinez, when McFarland did not have another witness ready.