Cynthia Coffman on Why She Should Be Colorado's Next Governor

There is no shortage of prominent challengers for the governor's office, as is seen by the list of individual Q&As with hopefuls that Westword has published to date in addition to our recent feature roundup, "Get to Know Colorado's Gubernatorial Candidates, in Their Own Words."

On the Republican side, we've spoken to businessman (and nephew of Mitt Romney) Doug Robinson, entrepreneur and former state legislator Victor Mitchell, tech expert and author Barry Farah and 2016 Denver for Trump co-chair Steve Barlock, in addition to former congressman Tom Tancredo, who dropped out of the contest earlier this year, and 18th Judicial District DA George Brauchler, now aiming at the attorney general position Coffman will be vacating. And an interview with State Treasurer Walker Stapleton will be appearing soon.

Coffman was once half of a Colorado power couple; she was married to Representative Mike Coffman before their split in 2017. Prior to becoming attorney general, she worked in legal positions with the Colorado legislature and a former governor, Bill Owens, and she believes the breadth of knowledge she obtained along the way will serve her well as the state's chief executive.

After talking about her background and her reasons for running, Coffman takes on a range of issues she sees as important, including transportation, education, sanctuary cities, workforce training and health care. She also weighs in on President Donald Trump, whom she considers to be a mostly positive force despite his stylistic dissimilarity to her, what she would do if the federal government tried to crack down on Colorado's marijuana industry, and the importance of having a Republican in charge of redistricting and reapportionment following the 2020 census.

With the Colorado Republican Assembly taking place on Saturday, April 14, at CU Boulder's Coors Events Center, Coffman's remarks, delivered during a car ride between Montrose and Delta on the Western Slope, couldn't be more timely. The conversation starts like so: 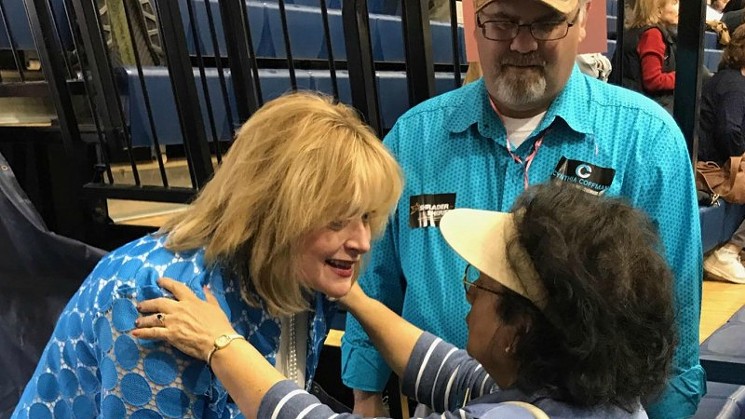 Cynthia Coffman meeting and greeting at the Jefferson County Republican Assembly.
Facebook
Westword: Why should Coloradans choose you to be the state's next governor?

Cynthia Coffman: I think that I am the best qualified, based on my experience not just as attorney general, but having been in public service in Colorado for many years. I know how state government should work, and I know that things aren't working now. I know the people and the way to fix problems. I think that I'm definitely the best qualified person and the right fit at the right time.

Where are you from originally? And how would you describe your family?

I grew up in Missouri — in southern Missouri, down in the Ozarks. My sister and I still own our family farm down there. We're the fifth generation. I have relatives in Missouri, and I have a very dear older sister who lives in Seattle. My parents have passed away now.

When did you first become interested in the law?

I knew when I was eleven that I wanted to be a lawyer. I was one of those precocious children. My father was a lawyer in our home town, and I wanted to follow in his footsteps. I thought that being a lawyer was the only honorable profession, if you can believe that now. Because really, then it was. Attorneys were leaders in their communities and involved in issues and helping the public. I thought that seemed like the perfect job. I went to the University of Missouri Columbia, which is where my dad went to school. I got my undergraduate degree there. I waited five years until I went back to law school. By that time I was ready to quit working for a while and go back to school. I was living in Atlanta, and I chose a public university, Georgia State University, that had both a day and a night program, similar to DU, so I could work and go to school.

You alluded to your public-service work in Colorado, and you've held many governmental positions over the years: a job in the Colorado General Assembly's office of legislative council, senior management jobs at the Colorado Department of Public Health and Environment, chief counsel to Colorado Governor Bill Owens and working with Colorado Attorney General John Suthers before becoming attorney general yourself. How will these various experiences help you as governor?

I think in each one of those jobs I had in Colorado government, I learned something key to how government runs. All put together, I understand how the legislature and the state budget functions and how the governor should interact with the legislature on decision-making. I've made friendships in both political parties and am able to get things accomplished because of that. In the AG's office, really every major issue in state government and boards and commissions crosses our desks. So I'm aware and up to speed on issues that concern voters in Colorado. I think all of that put together means that I'm primed and ready to get to work. 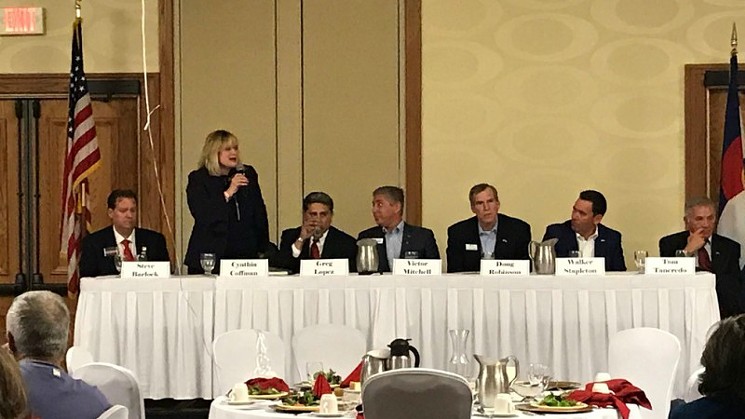 Cynthia Coffman speaking at a Republican gubernatorial candidate debate in January.
Facebook
The gubernatorial field this year is incredibly crowded. Did that give you any pause before deciding to throw your hat into the ring? And why did you decide the time was right for you to run now?

I didn't really find the number of people intimidating. I think in politics, you have to make a decision based on your own personal readiness to take a job on, and that was the case for me. I believed there were things I wanted to work on, and I wanted to be able to be in the CEO position, have the policy authority to make changes that you don't have as attorney general. My decision was based on things I want to fix so we can make the state a better place for the people of Colorado.

Your list of important issues for the campaign begins with transportation, and you note that Colorado has $9 billion in unfunded highway projects. Where will the money come from to make those projects a reality?

The legislature is debating this right now, so I'm interested in seeing what they propose. I think we're fortunate right now in Colorado to have a thriving economy. There's money in the general-fund budget that we can allocate to transportation. We have also gotten help as a result of the president's tax cuts and jobs acts. I don't know that we'll ever be in another position like the one we're in now, to take those resources and bond against those to be able to afford the top-tier projects CDOT has identified. That's the way I would go about it. There are proposals for tax increases on the ballot, but I frankly don't think that's necessary. What's important now is that the state government show its willingness to put money from the budget into transportation.

You mentioned the president. How do you think he's doing?

I'm glad we have a Republican president, as a Republican myself. I think there are things policy-wise that are very beneficial to the country, the tax cuts being chief among those. The president has a different style than I have — not surprisingly, since we're different people. But he has a different approach and a different way of characterizing things. And sometimes I cringe, and I would put things differently. But overall, I am pleased with the progress we're making as a country.