Get used to the Sports Authority signage on Mile High Stadium. It could be there a while. Photo by Brandon Marshall
For more than a year, the Denver Broncos have been desperately trying to line up a new naming sponsor for Mile High Stadium following the bankruptcy and subsequent collapse of Sports Authority, the athletic-gear retailer that previously held the rights. Now the team confirms that the Sports Authority Field at Mile High moniker will still be on the facility when the 2017-2018 season kicks off with a September 11 game against the Los Angeles Chargers, and a branding authority says it could stick around for a lot longer than that.

"We know they don't want to take a low-ball agreement," notes Darrin Duber-Smith, marketing professor and senior lecturer at Metropolitan State University of Denver. "If they believe they can get a good deal down the line, they can let this thing sit for one or two or even three years."

Clearly, the current situation isn't ideal. Indeed, when we last spoke to Duber-Smith on this topic, for a June 7 post headlined "Buying Broncos Stadium Naming Rights Killed Sports Authority, Expert Says," he stressed, "The main thing is, they want to get the Sports Authority name off the stadium."

For these reasons, Duber-Smith expected that a fresh sponsorship pact would be wrapped up sooner rather than later. That this didn't happen suggests to him that the Broncos "haven't been able so far to get the amount of money they're looking for" — a presumed $10 million to $11 million per annum for fifteen to twenty years. 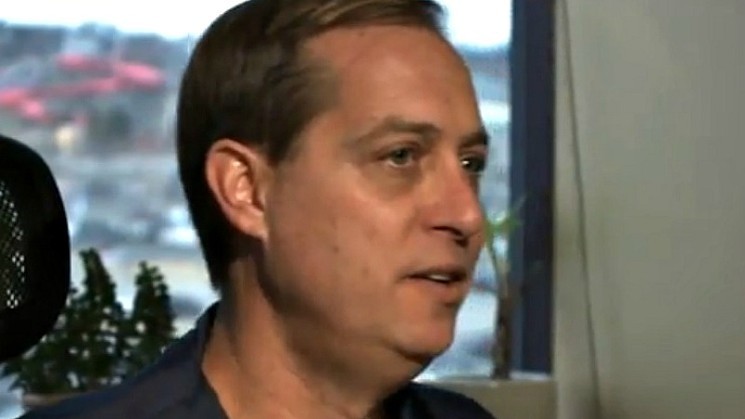 Metro State's Darrin Duber-Smith.
Fox31 file photo
Duber-Smith believes this kind of windfall won't be easy to attract. "It's harder to get a naming-rights partner for an older stadium," he points out. "There's a lot of buzz for a new stadium. And look at what they got for the L.A. Coliseum."

Indeed, the University of Southern California recently sold the naming rights to the venerable Los Angeles Memorial Coliseum, which opened in 1923, to United Airlines for $70 million over fifteen years, or around $4.66 million annually. This doesn't bode well for the Broncos, since the price tag is less than half the yearly amount the franchise is thought to covet. "L.A. is a much larger market than Denver," Duber-Smith acknowledges, "so I would have expected them to get more."

The L.A. Coliseum contract could be a negative harbinger for another reason, too. "Even colleges are getting into the naming-rights business," Duber-Smith says. "They can't ignore the revenue stream that comes from venue naming-rights agreements. And that means more competition."

Local examples of this scenario abound. As reported by BusinessDen, Colorado State University is open to a naming-rights sale for its new stadium, which hosted its first game in August, and the University of Colorado Boulder is shopping for partners to slap their honorific on Folsom Field.

"Because more colleges are doing this, there's a larger inventory of stadiums that need names on the market," Duber-Smith allows. "And the laws of economics say that when that happens, the price goes down." 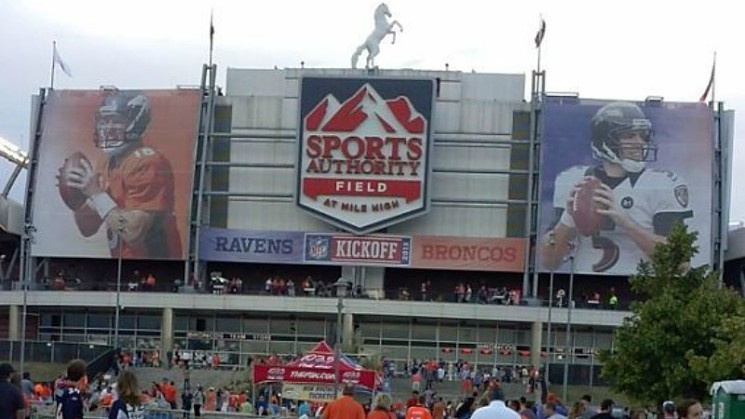 The giant photo of Peyton Manning is gone, but the Sports Authority signage remains.
Photo by Michael Roberts
The prospect that, as Duber-Smith puts it, "the market for naming rights may have plateaued," is speculative at this point, and the Broncos, who are working with William Morris Endeavor to line up a new sponsor, may feel that Mile High Stadium is such a unique property that it's capable of bucking such a trend. But this is an expensive strategy. When the Broncos took over Sports Authority's naming-rights agreement last year, the squad had to pay the Metropolitan Football Stadium District the $3.6 million the company owed for 2016 — and the firm was reportedly on the hook with the district for at least an additional $16 million through 2020.

Paying this price is preferable to removing the Sports Authority imaging entirely, though. In Duber-Smith's words, "The only thing worse would be to leave it blank. They really don't want to do that, because fans don't understand that in 2017, you need to have a venue naming-rights partner. It's not going to be Mile High Stadium; they don't want people to get used to having no [sponsor] name on the stadium. And people shouldn't want that, either, because the ticket prices would go up. Broncos ticket prices aren't that high compared to a lot of the league, and the venue naming-rights partner softens the blow for consumers."

Does that mean that ticket prices could go up if the franchise doesn't find a naming sponsor this season, or the next one, or the one after that? If so, the Broncos won't be the only losers.

In the meantime, the squad's braintrust is definitely frustrated. During the broadcast of Denver's 30-2 victory over the Arizona Cardinals last night, August 31, in the preseason finale for both outfits, game caller Ron Zappolo asked team president Joe Ellis about the search for a new handle — and Ellis grumbled that it was taking a lot longer than he expected....