Choking Your Kid for Wearing Short Shorts Is an Awful Idea, Derek Kinch

Getty Images
If the allegations against Weld County Sheriff's Deputy Derek Kinch are true, and his family says they are, he's more than earned Schmuck of the Week honors. After all, Kinch has been arrested on suspicion of child abuse and assault after he's said to have reacted to the length of his daughter's shorts by pinning her to a wall and choking her.

The details of the case are contained in Kinch's arrest affidavit. On July 21, the report notes, Weld County deputies were dispatched to Longmont United Hospital, where they spoke with Virginia Kinch, the deputy's wife. She said that six days before, on the 15th, Kinch and their daughter, whose name and age have been (appropriately) removed from the affidavit, got into a back-and-forth over the aforementioned shorts — and things soon got physical.

"The argument led to the Defendant pushing [redacted] up on a wall with both of his hands around her neck," the document states. "The Defendant lifted her up to the point where she was standing on her toes and could hardly breathe."

The girl reportedly responded to this attack by scratching at her father's hands until she drew blood and was finally released. Almost a week later, she still suffered from neck pains, which is why Virginia took her to the hospital's emergency room. 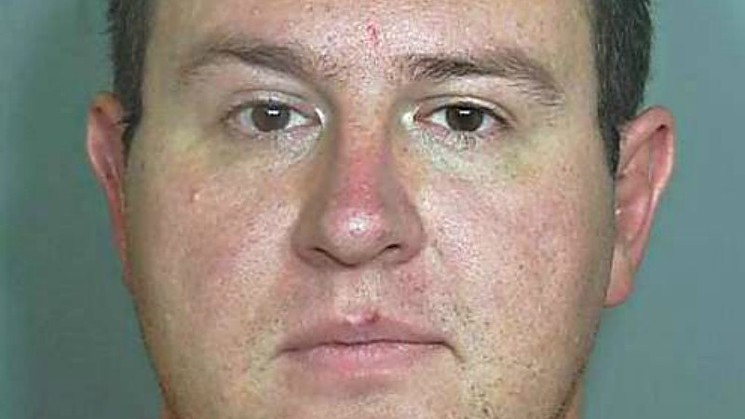 Derek Kinch's mug shot.
Weld County Sheriff's Office
Kinch's version of the story is considerably different. The deputy, who joined the Weld County Sheriff's Office in 2008, is paraphrased in the affidavit as saying he'd told his daughter that her shorts needed to be "finger-length and demonstrated his hands to his side. [Redacted] did the same thing with her hand and then shrugged her shoulder to make her hand rise."

After that, Kinch maintained that he "placed his hand on her shoulder, pushing her arm down and saying, 'no.' He said that [redacted] then scratched his hand and began attacking him and he had to push her against the wall to control her."

To put it mildly, the rest of the family didn't see things that way. Virginia and her other daughters had been witnesses to the incident and supported the girl's version of events. According to her, Kinch had grabbed her by the back of the neck with his right hand before leading her to the wall and placing his left hand around her throat, restricting her breathing. She was "wheezing" after he released her.

Oh, yeah: The girl said Kinch wasn't exactly a novice when it came to corporal punishment. She "recounted several incidents of being 'spanked' by the Defendant with belts, rulers and hangers," the affidavit allows. A sister had a similar tale to tell, revealing that Kinch "had used spatulas, rulers and belts to spank her.... In one incident, the Defendant had broken a ruler over her 'butt.'"

The capper: Virginia told a detective that Kinch had "made numerous statements that he would kill her and his family if 'he loses everything.'"

Just as a reminder: This is a guy who's supposed to enforce the law, not break it in terrible ways. Right now, he's on paid administrative leave pending an internal investigation. No word as to whether Kinch has objected to its length.